David Bowie wears a design by Mr Fish on the album cover for The Man Who Sold the World. Picture / Supplied.

Mr Fish, the 60s fashion label that helped usher in a “peacock revolution” in men’s fashion, is to be revived, evoking fond memories of a dandy revolution that inspired the young David Bowie.

Although it ceased trading almost 40 years ago, plans are being made to bring out a new line of shirts and kipper ties, using the famous name. The move comes as a number of menswear designers and fashion houses, including Gucci and J.W.Anderson, are referencing the label’s style.

Situated in Clifford Street, London, between Savile Row and Bond Street, the shop was named after its owner Michael Fish. Bowie, who was magnetically drawn towards talent, had found a sartorial partner in crime. Although Fish’s fashion reign did not last long (the shop shut down a few years after Bowie’s man-dress), the store was a part of a new wave of clothes that tapped into the counterculture movement. Teenagers born into the postwar baby boom had record levels of disposable income and were defining themselves by doing what their parents did not do, including how they dressed.

The outfit that Mr Fish is perhaps best known for is the “man-skirt”, which provided Bowie with one of his most memorable (and calculated) sartorial moments. “The man-dress Bowie wore on the cover of [the album] The Man Who Sold the World was part of a plan. He wanted to shock people,” says Paul Trynka, author of Bowie biography Starman. “He was explicitly destroying the Bowie of Space Oddity, the singer with the curly Bob Dylan haircut. It was his first reboot.”

It certainly confused many. Arriving in Los Angeles in the dress, Bowie was described by a dribbling Rolling Stone magazine as “ravishing … disconcertingly reminiscent of Lauren Bacall”. Months later, when his PR team took his next album, Hunky Dory, to the BBC, they were ejected from the building after being told that Auntie “didn’t play records by perverts”.

Trynka says the man-dress was part of a sea change in the singer’s life. “Bowie was hanging out with [the fashion designer] Ossie Clark. He was being dressed by the flamboyantly gay Freddie Buretti. The dress represented all of that.”
“Menswear was very conservative at that time,” says Phil Fish, Michael’s brother, who worked in the stockroom of the shop. “In the City it was the bowler hat and stiff collar brigade. People weren’t wearing frilly shirts.” Mr Fish offered a stark contrast: beads on velvet jackets and flattened kipper ties. “His clothes were very dandyish but had a historical depth to them,” says Elizabeth Selby curator of a forthcoming exhibition, Moses, Mods and Mr Fish. “He was using historical tailoring but making it very flamboyant. In a way he was going back to an 18th-century approach where men weren’t afraid of being expressive with their clothes.” 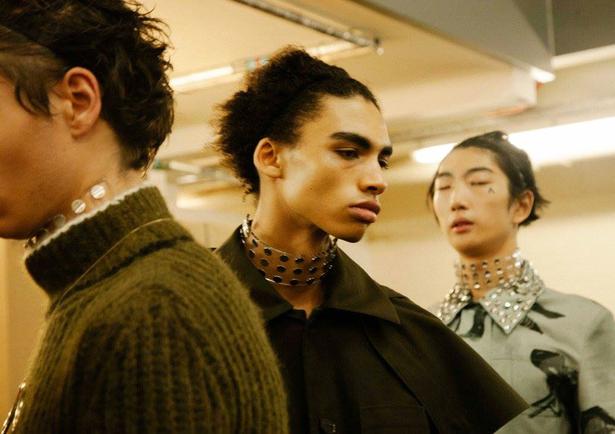 His references may have been looking to the past but they chimed with the free-thinking mindset. Explaining his philosophy, Fish told Newsweek: “Clothes should not reflect how ‘they’ or ‘I’ think you should look. [They] should reflect how you want to look.”

Fish was born in Wood Green, north London, and started his career working as a salesman before getting a job as a designer at Turnbull & Asser in 1962. Here his inventive floral designs helped the company update its lines. His bespoke boutique Mr Fish opened in 1966. “It was a lovely shop,” remembers his brother. “It was always full of celebrities, members of the royal family and aristocrats. He opened up lots of people’s eyes to men’s fashion.”

Mr Fish’s notoriety grew. As well as dressing key players in the London scene such as Bowie, he helped costume various cinematic lovable rogues (most notably Peter Sellers in There’s a Girl in My Soup) and designed Muhammad Ali’s Rumble in the Jungle robe. Mick Jagger wore his bishop-sleeved tunic at the Rolling Stones’ 1969 Hyde Park gig. It was two days after Brian Jones had been found dead and Jagger recited Shelley’s Adonais as a eulogy. The era-spanning shirt-dress felt strangely appropriate.

Investor David Mason is behind the revival of the label. “Mr Mason said the label deserves to be relaunched and there’s a market for it,” said Phil Fish last week. The influence of the man who said: “I always believed men are not physically designed for trousers” still looms large. Recent collections from Gucci and J.W.Anderson featured tunic-like skirt-shirts, silk robes and piecrust-collar shirts. And although Michael Fish suffered a stroke 11 years ago that left him speechless, his brother believes the original Mr Fish would be happy at the recent turn of events. “He’d be brimming over with happiness if he could understand everything that was happening.”

* Moses, Mods and Mr Fish is at the Jewish Museum, London from March 31