'The Panthers' tells the story of the uprising among Pasifika people during the 1970s dawn raids in New Zealand. Photo / Supplied Stylist and costume designer Sammy Salsa talks about his work for the new six-part TV series, which honours the powerful legacy and spirit of the Polynesian Panthers

When Prime Minister Jacinda Ardern was cloaked in a fine mat earlier this month at the Auckland Town Hall — a Samoan custom of asking for forgiveness known as the ifoga — the historical moment marked a significant step forward in the healing process for the damaging impact the 1970s dawn raids had on Pacific people.

Timed to coincide with the 50th anniversary of the Polynesian Panther Party, a movement founded to fight mistreatment of Pasifika people, the raids on Pasifika migrants and their subsequent deportations caused the division of families, devastated communities and resulted in intergenerational trauma that still exists for many today.

Despite the fact that most overstayers during that time were from Europe and North America, this low point between the Government and the Pacific community saw the New Zealand Police entering homes at all hours of the night and stopping people on the street to demand proof of permits, visas and passports — anything that proved a person’s right to be in the country. This procedure was almost exclusively focused on Pacific Islanders — even those who were legal citizens of New Zealand.

New TVNZ six-part drama The Panthers takes a closer look at Pacific activism through the lens of the Polynesian Panthers, founded on June 16, 1971, by Will ‘Ilolahia, Fred Schmidt, Nooroa Teavae, Paul Dapp, Eddie Williams and Vaughan Sanft. Their goal was to address the growing racist sentiment aimed toward the Maori and Polynesian community of New Zealand in the 1970s.

A post shared by The Panthers TV Series (@thepantherstv)

To help enhance the storytelling, top stylist Sam Cowley-Lupo, aka Sammy Salsa, was tasked with the honour of working on the series as head costume designer. He shares with us his visual diary of bringing a pivotal moment in Aotearoa’s history to life for the screen.

The vision
I was approached by the producers of The Panthers in August 2020. It was during lockdown, so my first initial meeting was over Zoom. They sent me the pitch deck and I flicked straight to the costume brief and under it was the title “Costumes — Ministry of Swag”. This was supported by a collage of reference photos they had collated — including an image of myself in a beret! They were looking for someone to lead the department of costumes and, in the words of producer Tom Hern, “needed a minister of fashion”.

Initial inspiration
Based on real-life events, the story of the Polynesian Panthers is set in the mid-1970s, an entire decade before I was even born. I referenced a lot of what the original Panthers wore back then and I also took a lot of inspiration from my own aiga (family). An image of Polynesian Panther member Foof and his wife was one of the first images I came across and from it a lot of inspiration was born. Our people are resourceful, they made do with very little. I just love how they have pieced together their own unique style in this one image. 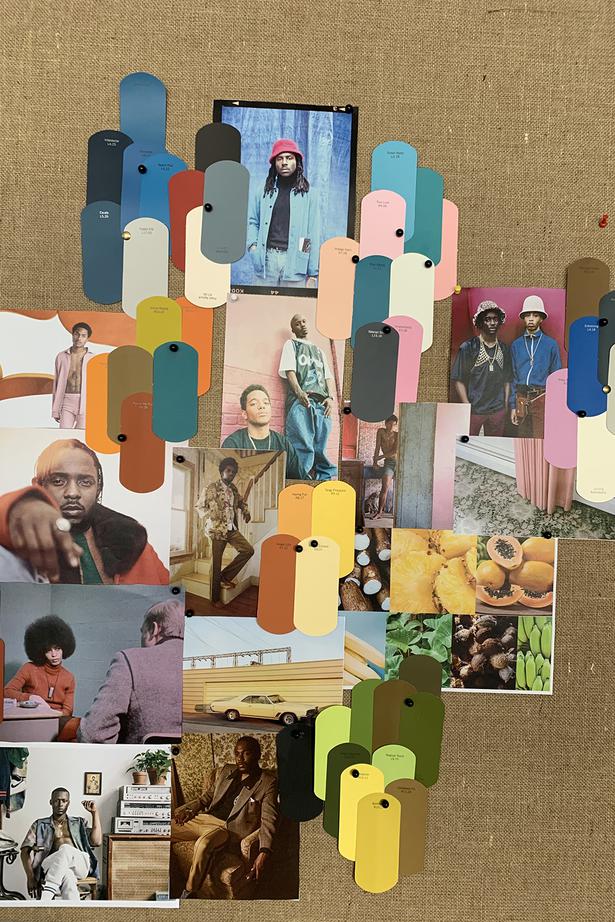 The colour palette
My intention for the colour palette of the costumes was to differentiate the two worlds — The Polynesian Panther world and the Palagi (European) world. I wanted our Pacific characters on screen — from the leads to the extras — to exude colour and life through the clothes. Despite what the narrative of the true events were, it was important that the costumes didn’t reflect that sense of defeat or oppression. I wanted each character to still look powerful and resemble a sense of belonging, reclaiming their worth. I was constantly in communication with The Panthers’ production designer Jane Bucknell about colour schemes and what costumes would work up against her backdrop. It was important for both of us to execute each scene in harmony.

Our costume team
It’s important for me as a relatively new costume designer to open up opportunities to our own communities, for them to learn and grow within the costume or fashion industry. It was vital for me to have a predominantly Pacific and Maori costume department. We’re telling this story through costume, and who better to help narrate it with me than the community who are from it. Along with some incredible allies in our costume department, this was the perfect example of unity through storytelling. 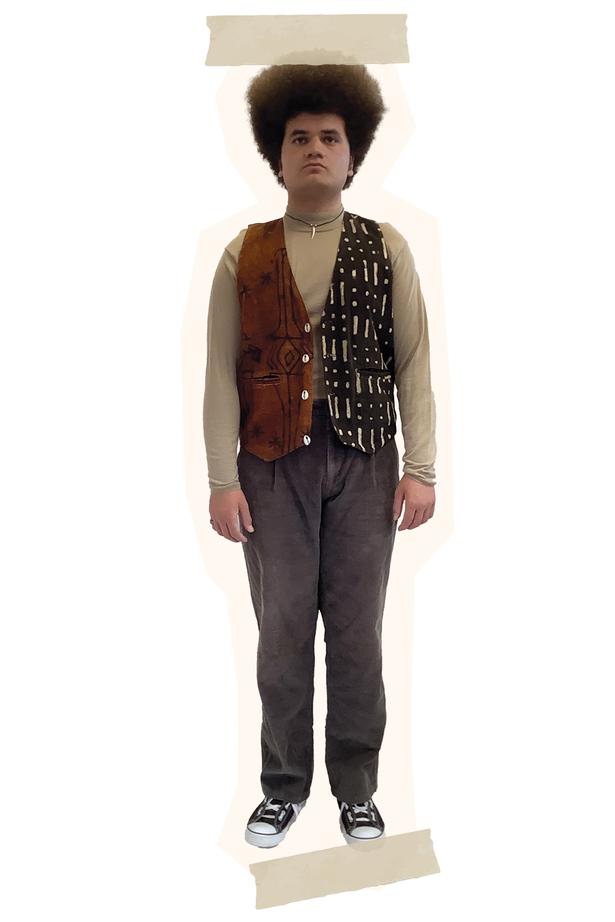 My favourite item of clothing from set
To this day, I keep thinking about this beautiful Pacific print waistcoat with shell buttons that I found at ATB (Across The Board), a TV and film costume hire place. I knew exactly who I wanted to wear it — Tigi, played by Sean Amiga. It’s one of those pieces that could easily travel through the decades and still be so dope today. Matched with Sean’s natural afro, it was the perfect ensemble. Shug’s shaggy coat
One of the inspirations from that original photo of Foof was Shug’s shaggy faux fur coat in the opening scene of episode one. Here we had a young Shug (played by Henry Antoni), who came from nothing. His world was crumbling around him — but he always looked so fire! I wanted to play around his masculine exterior and drip him out with this coat. He just happened to make it look so effortless and cool. Dressing Tessa, played by Frankie Adams
Tessa was so fun to build! Played by Frankie “the range” Adams, we referenced real-life “shippies” (working girls). She had flair, style and power. She was no damsel in distress, she was that b*tch! She had all the sailors and our very own Will wrapped around her finger. From seeing reference images of real-life shippies, they always looked so chic and stylish for that time. I wanted to make Tessa into this street-walking fashion icon fantasy of the 1970s. Dimitrius Schuster-Koloamatangi as Will. Photo / Supplied

Dressing lead character Will, played by Dimitrius Schuster-Koloamatangi
Will ‘Ilolahia, the founder of the Polynesian Panther Party, loved a good aloha shirt. Auckland being the biggest Polynesian city in the world, you would think we were stacked to the roof with aloha shirts. We are, however the ones from the 1970s were a lot different to the ones you find today in Otahuhu. I contacted vintage stores from Whangaparaoa all the way down to Wellington. It was a mission but we found some gems.

Dressing Ice, played by Beulah Koale
One of my favourite characters to build was Ice, played by Beulah Koale. We never got the chance to do a pre-fitting with Beulah before shoot day as he was in quarantine, so we had most of our discussions over Zoom. I even had to get a fit model in (aka my boyfriend Tapukai Helu) to try on the costumes as they were the same size and then send the fitting images over to Beulah. This was the perfect collaboration between a costume designer and the main character. I didn’t want to dress him like your typical thug. Ice was made out to be a villain but he was more of a modern-day Robin Hood — and he looked good. We both really admire Al Pacino in The Godfather and Scarface, so I drew a lot of fashion inspiration from those movies.

The Panthers is available to view now on TVNZ OnDemand