Baron Haussmann got a Parisian thoroughfare named after himself in the mid-19th century by reconfiguring the city's circulatory road systems into wide, grand avenues. The idea was to widen streets and prevent blockades and riots. It didn't entirely work, but was a noble effort.

What did it take for Chanel to get its own street? Well, if you pump vast amounts of cash into building a set that's a facsimile of a Parisian rue, you can call it whatever you damn well want. So, the models at Karl Lagerfeld's spring/summer 2015 Chanel show sauntered in groups down the centre of "Boulevard Chanel," easily chatting among themselves. A few carried boom boxes packed into chic Chanel handbags, the tinny sound reverberating until the thumping main soundtrack took over. "I'm every woman," warbled Whitney Houston, at one point, "It's all in me."

She could have been talking about the collection because, in typical Lagerfeld style, it was all in there. Wide trousers, tunics, print, plain, military, pinstripes, sweaters, Gisele in a striped cardigan and something suspiciously close to a pair of Chanel Uggs.

All present and correct, on flat shoes, women striding meaningfully off to work. Which, in the fashion world, means the end of the (catwalk) road and back. There were also, obviously, plenty of bags, printed with faux-politicised slogans such as "Feministe mais Feminine," or "Votez Coco." 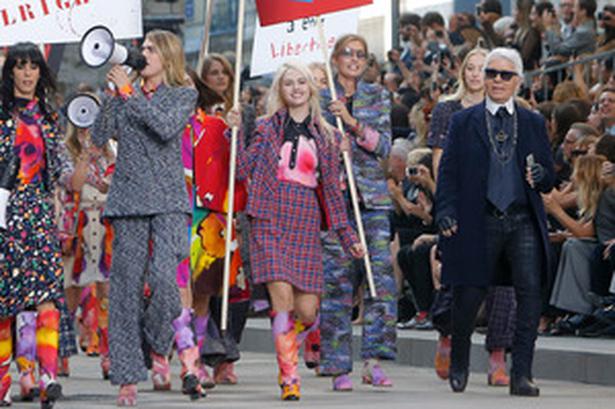 Karl Lagerfeld walks the runway with his 'protesting' models at the Chanel spring/summer 2015 show in Paris. Picture / AP Images

Those were portents of protest to come. As the show finished, models returned to the stage (or rather, the street) brandishing placards daubed with pronouncements like "Make fashion not war" (fair enough), or "Tweed is better than tweet" (a bit of pointless punnery). Their clarion call, via megaphone? "What do we want? Tweed!" OK.

A few of the models had the good grace to look embarrassed; most seemed to think it was a bit of a laugh. Which also summarised the audience's reaction. Maybe Lagerfeld was cynically poking fun at the whole idea of fashion commenting on culture at large, intentionally reducing its protests to facile fashion commandments rather than an attempt at genuine change. But the co-opting of protest polemic as a tool instigating you to buy, as opposed to question why, struck a bum note.

It was the artifice of anarchy. A joke, sure, but not an especially funny one. And it overshadowed the real message of the clothes on show, which in their diversity and lack of fashion diktat, did have something of a feminist, Chanel-for-all message running through them. Looking through the ranks of the audience, and seeing the Chanel jacket crop up again and again, from front-row couture client to standing fashion students, you were arrested by the continuing universality of that style Coco Chanel herself originated. It's a great jacket, but it's not worth rioting over. Haven't we all - fashion designers included - got something more interesting to say than that?

In short? Nice show. Shame it all had to end like that.