The symbolism, whether it was deliberate or not, was clear; Miuccia Prada’s raft of skinny models emerging from violent darkness into sunlit shorelines was a neat visual metaphor for transitioning out of the pandemic and into the light.

For her spring/summer 2022 menswear showcase, the third show the designer has now unveiled ‘in collaboration’ with Raf Simons, the digital showcase depicted models weaving through claustrophobic, scarlet-red tunnels before bursting onto a glorious beach, splashing through azure waters.

Caves gave way to expansive Sardinian seascapes. That location was in fact the coves of Sardinia, to highlight the brand’s support of the MEDSEA Foundation which focuses on the reforestation of a marine plant crucial in absorbing CO2. 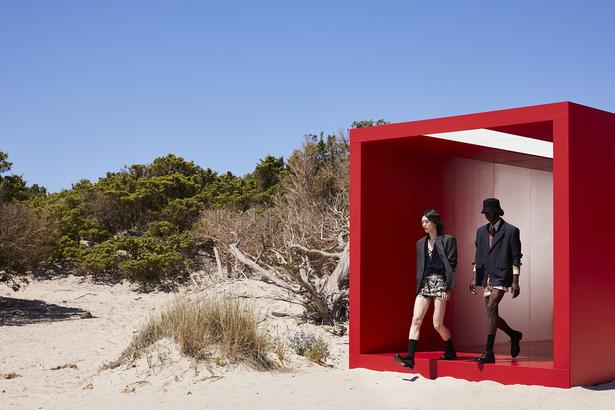 Even in the flesh, Mrs Prada doesn’t do lengthy explainers into her thought process, but the brand’s cryptic post-show release spoke of a ‘tunnel to joy’, ‘urgency of feelings’ and ‘utopia of normality’.

The models’ dash was certain urgent, as they paced forward into the surf and swam out to floating pontoons in the sea, most of them in micro short-shorts, some covered with a pelmet/skirt hybrid.

The silhouettes were as lean as could be, and acres of coltish leg were on show; perhaps a nod to a new sense of freedom.

There was certainly a freeing up of the body; vests and undone cardigans were worn alongside alot of the shorts. 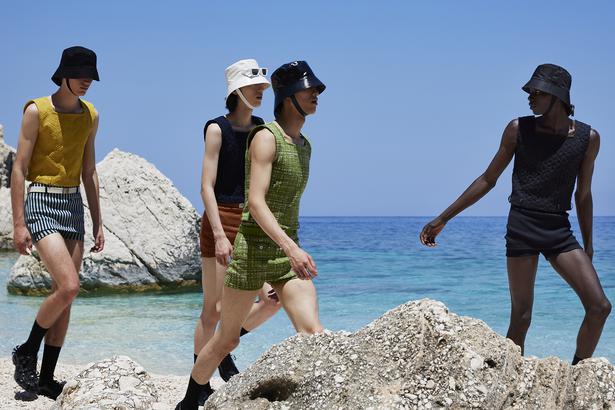 The seascape was alluded to in a series of bucket hats and fisherman capes, as well as the criss-crossing designs on knitwear, but literal interpretation is never the point in the temple of Prada.

If last season’s body-encasing rompers nodded to the infantile and comforting, these were clothes for emerging from slumber and out into the world; that bracing PVC outwear, for example, or the sharp, angular cuts on tailored jackets.

READ: Every Look From Prada Menswear Autumn/Winter 2021 (And Everything We Loved The Most)

Prints were a recurring theme, taking the mundane summer motifs of deckchairs — that utopia of normality in action - and applying them to jumpsuits and shorts, as well as traditional sailor tattoo imagery such as mermaids and anchors painted across shirting.

Geometric patterns that called to mind the ‘ugly chic’ motifs of late 90s Prada also featured, a nostalgic dose of purist Prada alongside the new, Raf Simons-infused iteration of the house. 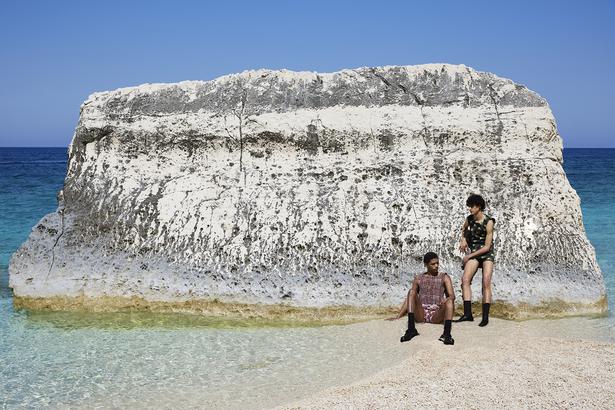 These were clothes for emerging from slumber and out into the world. Photo / Supplied

Speaking of Simons, elements of his own-label made their way into the Pradaverse, in the form of the snoods and boxy silhouettes up top with narrow cuts (and shorts) below.

And for the man who is stomping out of the shadows and back into the workplace, there were a series of sharply tailored jackets with high, strong lapels — a signifier of corporate uniformity after months of lockdown leisurewear. Miuccia Prada’s man is moving on, and these are just the clothes to convey that message.