Kerby Jean-Raymond won the most lucrative and prestigious competition for young American fashion companies Monday night. His brand is Pyer Moss, a sportswear label that bears his distinctive social, political and aesthetic point-of-view. His fingerprints are all over it. It is an auteur's collection.

His victory at the CFDA-Vogue Fashion Fund awards speaks not only to his success as a designer but also to his ability to nudge fashion toward a place of great social engagement and responsibility. In applauding Jean-Raymond's work, the industry is also applauding itself.

And yet Jean-Raymond's prize is one of the few recent times the annual competition has gotten it right, as it too often reflects the industry's mania for buzz, novelty and other sugar-high qualities not necessarily compatible with building a lasting career.

Jean-Raymond, who founded his label in 2013, gained early notice for a T-shirt that listed the names of people of colour who had been killed in incidents of police violence. When he wore it to present his collection to editors and buyers in September 2014, its audacious social justice message rippled through the fashion industry, and it primed audiences for the complex runway productions yet to come that would incorporate visual arts, live vocals and musicians.

There have been hurdles as he has built his brand. He lost accounts because of his outspoken nature. He struggled to regain financial control of his company. With a team made up of artists and architects — folks whose creative experience lies outside of fashion — he honed a message that at once celebrates the unique stories of people of colour while placing them into the broader context of universal, shared experiences. Pyer Moss has referenced the eccentric wardrobe of Jean-Raymond's Haitian-immigrant father, the modest beauty of church choir robes, the urban cool of athletic gear and the soulfulness in contemporary art.

Every designer offers something unique, but Jean-Raymond's singularity is how well attuned he is to these cultural times. He has used both his fashion and his runway shows to further the conversation about gun violence, police brutality and endemic racism. His work captures the diversity of voices demanding to be heard, the sense of cultural upheaval and the notion that simply living authentically is a powerful form of protest.

He has backed up his high-minded ideas with collections that have been increasingly better crafted and more thoughtfully conceived. Along the way, he has signed on for the requisite collaborations: His is with Reebok. His clothes have also had their share of red-carpet moments on the backs of socially engaged celebrities such as Yara Shahidi.

Today, Pyer Moss is also well-positioned to speak broadly to the place fashion occupies in the cultural conversation. Fashion is where topics from immigration to police brutality converge, where diversity is front-of-mind, where beauty is defined, gender is debated and creativity is cooked up, gorged on and spat out. 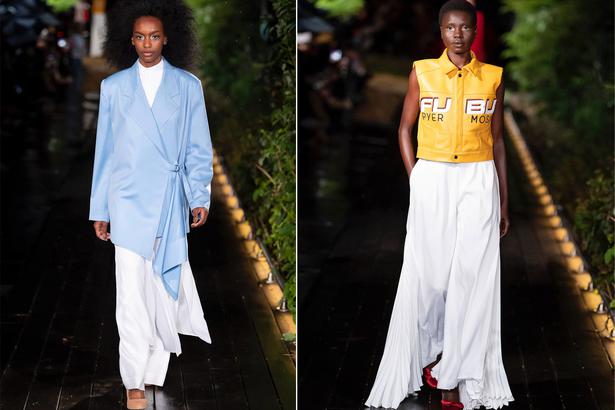 The winner of this year's competition was announced by the actress Emily Blunt at a dinner at the Brooklyn Navy Yard. Past winners, runners-up and finalists include just about every buzzy young designer this city has produced — from the competition's first winners Jack McCollough and Lazaro Hernandez of Proenza Schouler to Joseph Altuzarra, Prabal Gurung and Victor Glemaud. Over the years, the cash award has ticked upward so that it is now $400,000 USD. But the invaluable prize is the one-on-one business mentoring that helps designers navigate the industry's financial perils. Runners-up were Jonathan Cohen and Emily Adams Bode; they each receive $150,000 USD.

The Council of Fashion Designers of American and Vogue launched the Fashion Fund in 2003. In that post-September 11, pre-Instagram world, fashion was on particularly shaky financial ground and wrestling with many demons. Its runways and magazine covers were notably homogeneous in race, ethnicity and size. Many were worried about the well-being of models, from their working conditions to their physical health: The average sample size had shrunk from a six in the 1990s to a two, and the industry was being pushed to reckon with the impact of its casting decisions on the mental health of vulnerable young women.

In many ways, the CFDA-Vogue Fashion Fund helped. By elevating and bolstering a new generation of designers, the award allowed new points of view to begin to effect change. Many of the fund's winners and runners-up have been instrumental in advocating for larger-size models, gender fluidity and racial diversity. They have helped change the demographics of the runway, which serves as the first glimpse into the industry's mindset.

This year's dinner included the traditional chicken pot pie and a show of the finalists' work, worn by singers, dancers and aerialists instead of models. It was a notably diverse affair, the stage no longer monopolized by lean physiques and white gamines — as even the Rev. Al Sharpton, who sat watching with an expression of curiosity and amusement, remarked upon. He was a guest of Vogue editor Anna Wintour, who had suggested he attend after he reached out to her to discuss diversity within the fashion industry. The civil rights activist said after the awards dinner he was pleasantly surprised by the representation that he saw.

Of course, the faces on the runway are only the most visible aspects of the fashion industry. One also has to ask: Who owns the retail? Who finances the brands? Who edits the magazines? And who scouts and hires the models?

In recent years, though, the CFDA-Vogue Fashion Fund has also exposed the weaknesses of the industry and the challenges it has created for itself. Fashion has an insatiable appetite for rule-breaking young talent and a business model that demands the crowning of a new "it" designer with regularity. It has little patience to wait for designers to find their way. And it has trained consumers to see, buy (at a discount), discard, repeat.

In its yearly search for 10 finalists, the Fashion Fund judges have turned the spotlight on many brands that, in hindsight, were not ready for so much attention. Many designers that it declared the next-great-wunderkinds are no longer in business, or their brands have been so utterly reinvented that they are barely recognisable. In some cases, judges seemed to have been so entranced by a brand's outlier vision that they seemed to be celebrating a mind game, an aesthetic experiment rather than a viable clothing business.

The result was that the public was forced to listen to the industry sing the praises of companies that lay claim to dressing Lady Gaga or Rihanna or the drag queen next door and equating that experience with being ready to sell to a wider audience. All the world might be a stage, but only a lucky few of us are lead performers in our own costume drama.

With this group of finalists, the CFDA and Vogue highlighted the modest prairie dresses of Batsheva Hay and the streamlined handbags from Hunting Season, which was founded in New York and is based in Bogota, Colombia. It celebrated the work of designers whose families have roots in Mexico and the Dominican Republic. Their work honoured the handicrafts of the American South and challenged the definition of exactly what it means to be American, masculine, feminine or beautiful.

Those are admirable achievements and topics well worth pondering. The question is whether they have the capacity to become enduring businesses.

Robin Givhan sheds light on what a casual consumer of fashion is supposed to make of the looks at this year's New York Fashion ...