At Dior, designer Maria Grazia Chiuri revels in the messages of other women but fails to make her own voice heard. Meanwhile, Saint Laurent comes in loud and clear

"Were you in Milan?"

The question was once so innocent. It was a casual conversation starter between editors, stylists and retailers as they arrived here for the final stop on an international fashion show circuit that included New York, London and then — maybe, just maybe — Milan, before they settled into their seat at Christian Dior, the esteemed French fashion house that unofficially signals the start of the ready-to-wear season here.

"Were you in Milan?" That used to be a shorthand way of asking about runway trends, about whether designer Miuccia Prada still had the creative chops to leave an audience rapturously discombobulated. What was once a question steeped in possibility and optimism, however, is now one drenched in anxiety about the coronavirus, cases of which have spiked in small towns surrounding Milan in northern Italy and have been spreading southward. There have been 374 confirmed cases and 12 deaths, as of noon local time Wednesday. 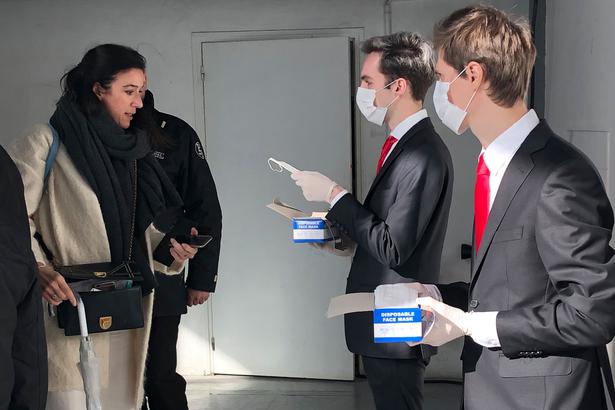 Now guests sit shoulder-to-shoulder at fashion shows from morning to evening. And more than ever, there is a sense that these communal gatherings of aesthetic prognostications are little more than petri dishes of incubating germs rather than ideas.

No one has canceled a show here — not like in Milan where Giorgio Armani decided to live stream his runway show from an empty theater as a safety precaution. Some retailers canceled their Milan trip and headed directly to Paris, where they will buy the collections in the affected brands' showrooms here instead.

At Dior, designer Maria Grazia Chiuri's show notes opened with an acknowledgment of the realities of our interconnected economy: "All our thoughts are with our teams, clients, friends and partners in Asia, Italy and around the world." At the entrance to the Dries Van Noten show Wednesday afternoon at the Opéra Bastille, ushers handed out face masks. Large pump bottles of hand-sanitizer were stationed just beyond the metal detectors, which now greet guests at every show — remnants of last year's fears, both real and existential.

Meanwhile, the shows go on. The anxiety simmers. There is no light. People obsessively scrub their hands with Purell. They are not so keen on the double-buss greetings when a smile at arm's distance will do. But still, they kiss. They take selfies. They step-and-repeat.

There is no light. Every time a bit of blue sky dares to brighten the day, the clouds roll in and the wind whips up and rain pours sideways across the stalled traffic. At 2:30 on Tuesday afternoon, guests arrived at the entrance to the Dior show: a giant box constructed in the Tuileries Gardens. Darkness greeted the celebrities: Carla Bruni, Sigourney Weaver, Andie MacDowell.

Neon words glowed and flashed feminist incantations and provocations from the rafters. Consent. Consent. Consent. The words flickered off and on in red, orange and green. Women are the moon that moves the tides. The words held steady in bright blue lights. We are all clitoridian women. The words leered in brazen pink. But this was not light. This was heavy, burdensome, dense. The fighting, the resisting, never ends. Dior was exhausting even before Chiuri sent out some 100 models in a parade of plaid, fringe, underwear and branded shopping bags.

Chiuri is a feminist. It is impossible to tell a story about Chiuri and her design aesthetic without mentioning this fact. This is as she would have it. From her debut collection as the first female creative director at Dior, she has used her position to elevate the philosophical writings of women who have dissect the patriarchy. Her presentations have rallied around women and railed against an intellectual environment that devalues women's ideas, ignores their creative output and objectifies their body. Her fall-winter 2020-21 presentation was no different.

It was organised in collaboration with artist Claire Fontaine, who uses illuminated signs in public space to name our cultural contradictions. The models walked on a floor papered with pixelated renderings of Le Monde newspaper. The brand was legible, but the stories, the content, were not.

Chiuri also found inspiration in the writings of the late Italian feminist Carla Lonzi, who pondered the ways in which we are all complicit in the patriarchy and how women must have agency over their body but not be defined by it. All hail a woman's vagina; but remember she is more than her vagina.

Chiuri wrestles with complicated issues — ideas about identity and the role that women play in perpetuating the myth of male supremacy. It is not that fashion does not have the capacity to grapple with these concerns in thoughtful and meaningful ways. Fashion is the perfect place to explore questions about social hierarchies, sexuality and power. But Chiuri doesn't allow her clothes to speak to the subject matter that has so captured her intellectual curiosity.

The first look down her runway was a black double-breasted pantsuit. Traditional. Masculine. Emblematic of power. Nice suit, but it seems like a simplistic response to a question that has spawned countless dissertations. Is that what it means to fight the patriarchy? Dress like a gilded era gentleman? Chiuri turns to the densely packed writings of feminists, art critics and activists. Instead of countering their work with her own fashion daring, she offers an apology. She surrenders to the lie that fashion is without power and authority.

At Dior, as at so many other shows, young women walk across a vast runway as the object of everyone's attention, dressed not by themselves but by a real world Pygmalion. They are inspected and ogled. Is there a way for them to retain agency over their identity under these unnatural circumstances? Instead of taking on that challenging question, Chiuri throws up her hands.

READ: 10 Of The Most Wearable Menswear Trends From Paris Fashion Week Autumn/Winter 2020

She elevates other women's groundbreaking ideas, but she is barely scratching the surface of bourgeois adornment. She amplifies their voices, but Chiuri's voice remains muffled. She is a feminist enraptured by the big, amorphous fight but who is ignoring the small discernible victories she can exact on her own runway by, for example, highlighting crones, matrons, spinsters and all the other versions of non-nubile women that society rejects.

We are in the thick of a new chapter in feminism. The Harvey Weinstein guilty verdicts, while not a perfect victory, shifted the tone of the entire conversation surrounding sexual assault. The 2020 presidential race is giving us multiple new templates for what it looks like when a woman runs for commander in chief, pushing us just a little bit closer to a time when those templates will no longer be necessary. 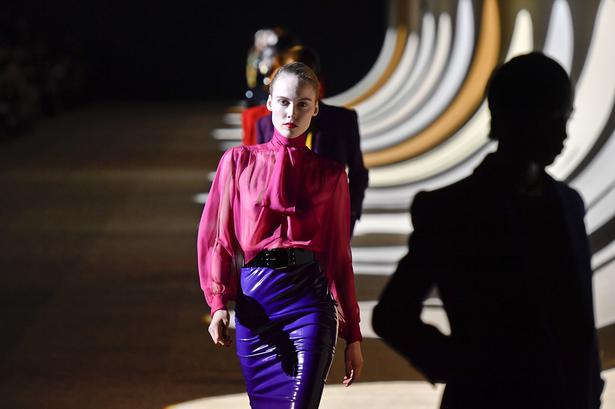 And in fashion, specifically in Milan, Prada recently brokered a new kind of creative collaboration, announcing she was bringing in Raf Simons as her co-creative director to ostensibly inject a bit of outsider energy into the label that bears her name. It is a seismic shift at a brand that has exuded feminism by wholly redefining what it means to be beautiful, sexy and powerful without being beholden to the male gaze. Prada has welcomed Simons into her world. Welcome to the matriarchy.

What would a matriarchal fashion industry look like? One that was driven by female desire, self-possession and creativity? Would it include the latex leggings and pencil skirts Anthony Vaccarello put on the runway at Saint Laurent Tuesday night? Would they be worn by models with the legs of wobbly ponies?

Vaccarello emphasized the tension between polite society and the underground. He dignified fetish gear with his sophisticated color palette of violet and raspberry and pale blue. He gave aesthetic credence to the male gaze. His clothes might rile up feminists — or feminists might take ownership of his vision. But his clothes were voluble. Vaccarello dominated the conversation.

At Dior, folks heard the voices of women. They heard their anxiety, anger and self-doubt in a stream of babble: Were you in Milan? Your vagina is powerful. You are more than your anatomy.

The disappointment is Chiuri herself was silent.