Is there a show still as beloved for its style and sass as Sex and the City? The show, which ended in 2004, has sustained its cult following years later, with a must-follow Instagram account further reinforcing the SATC nostalgia.

A quest to document every ensemble featured on the show, @EveryOutfitOnSATC features screen-grabs of Carrie, Charlotte, Miranda and Samantha’s outfits with sassy and clever captions dissecting the looks of costume designer Patricia Field. It’s also some of the best fashion writing you’ll find online.

“This oft-requested outfit really distills Carrie down to her purest form - improbable chic. It certainly is her most resourceful outfit of the series. The use of Mr. Big’s crisp white button-down (no doubt Brioni) and his Hermes belt to highlight her waist is pure genius.

"Perpetually on-trend, Carrie’s knack for deconstructing and elevating basics anticipates the design ethos of the Vetements collective, further reinforced by the excessive sleeve and belt length. Only Carrie could turn this sartorial tragedy (a ruined Richard Tyler bias-cut dress) into an opportunity to let the Upper East Side know she’s got great legs.”

Los Angeles-based friends and longtime SATC fans Chelsea Fairless and Lauren Garroni launched the account in June 2016. Two years later, they have 502,000 followers and counting, and have been covered by everyone from Vogue to Elle.

What made you want to start the account?
Lauren: It started from a conversation. Chelsea and I couldn’t believe that something like this didn’t already exist. Within the hour we had posted our first caption on the account. We lived on opposites coasts at the time and it was something to make each other laugh. A side benefit is it allows us to channel the wealth of late 90s/early 00s fashion and pop culture trivia we both have.
Chelsea: I always wanted there to be some sort of database of looks from the show. I used to work as a photo researcher, mostly for fashion industry clients, so I have a pretty good sense of what is and isn’t readily available on the internet. And, despite the immense popularity of the show, there wasn’t an online resource that explored the fashions on the show beyond Carrie’s ‘Greatest Hits’. We’re more into Miranda’s ‘Deeper Cuts’, after all.

Are you really going to catalogue every single outfit?
Lauren: That’s the goal. Right now we’re still riding high on the number of great outfits we have at our disposal to be snarky about. That could change a year from now.
Chelsea: Yeah, we might have a breakdown when we have to sift through the dregs of boring Charlotte outfits. But we can certainly commit to cataloguing the looks that matter. I don’t think our readers actually want us to document every Steve outfit, for example. 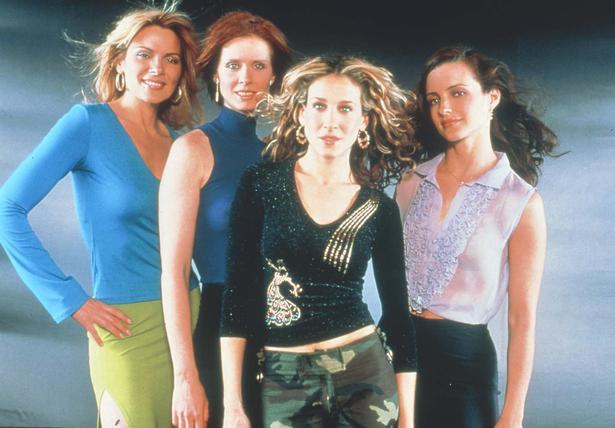 What’s your favourite SATC outfit?
Lauren: Carrie wearing the ‘Horses’ printed dress from the iconic Chloe S/S 2001 show with an amazing petticoat and exposed, basic nude bra underneath.
Chelsea: I love the hot pink Ungaro power suit that Samantha wears in season four, episode seven. The colour and silhouette is so impactful and quintessentially 80s. Not to mention campy.

Favourite episode?
Lauren: Hard to pick just one. Season four is personally my favourite. I’m a big fan of the episode ‘My Motherboard, My Self’ — it’s not the best fashion episode, but it’s tonally and emotionally perfect. Another great episode from that season is ‘Sex and the Country’. The stylistic juxtaposition between “Country Carrie” and “City Carrie” is Pat Field at her best.
Chelsea: I love the two episodes in season three where the girls visit Los Angeles. There are sheer kaftans, fake Fendi bags, fabulous locations and cameos from Hugh Hefner and Carrie Fisher. Oh, and that scene where Miranda rides the mechanical bull is iconic.

Do you think there will ever be a show that has as much fashion influence as SATC?
Lauren: There will be. If this account is anything to go by, people are primed for another fashion-centric, relationship driven comedy. However, the stars have to align for the right material, star and stylist to come together to hit the same sweet spot that SATC did.
Chelsea: It’s certainly possible, but like everything in fashion, the timing is crucial. Patricia Field’s high/low aesthetic was unleashed upon the world at the exact right time. And it didn’t just entertain people, it actually changed the way that people dressed and shopped. I remember going to see the first film on opening day and almost everyone in the theatre was dressed in cocktail attire. That level of participation is hard to replicate but I would love to see it happen.

Explain the #FuckingCarrie hashtag.
Lauren: Watching the show with today’s eyes, a lot of Carrie’s behaviour that on first view seemed whimsical and quirky, doesn’t hold up. That hashtag was created for a post about her literally burying her engagement ring under a wall of mock-pearl necklaces. Which is an incredibly passive-aggressive way through fashion to let your fiance know you don’t want to get married. To me, #FuckingCarrie embodies my dichotomous feelings about the character of Carrie Bradshaw. The reasons I love her or also the behaviours that make me want to tear my hair out.
Chelsea: Yeah, Carrie is a problematic fave. Her neurosis and self-involvement is relatable at times, but she regularly makes truly awful, even borderline-crazy decisions. Like when she tried to force Natasha to forgive her for ruining her marriage. Or when she stalked Mr. Big and his mother at church against his wishes. She has her Gone Girl moments, and that is the essence of #FuckingCarrie.

Why do you think it has had such a lasting influence?
Lauren: There hasn’t been a show like it. It was pure wish-fulfilment yet each of the women were ambitious and not ashamed of it.
Chelsea: The struggles of the characters are still relatable today. And the fantasy element of the show is as appealing as ever, we’re still coveting Carrie’s Dior saddle bags to this day.

Which character do you most relate to, and whose style do you like best?
Lauren: We don’t believe anyone is one character, because that would be alarming. Although I think we all aspire to be a Samantha in the workplace. I would say I’m a Miranda with a Carrie rising; mostly particular with flourishes of the fancifully deranged.
Chelsea: I’m a Samantha with a Miranda rising, although traces of Carrie creep in from time to time. Style-wise, Samantha is my favourite, hands down.

What do you think is behind the current nostalgia trend for the early 00s?
Lauren: It’s just time. Fashion is cyclical and its nostalgia usually runs in 20-year cycles. Although with the rise of Tumblr and Instagram there seems to be a quickening in regards to that.
Chelsea: Yeah, I blame Tumblr. Tumblr kids practically define youth culture right now and fashion always pays attention to what the kids are into. Plus designers are relying on references to such an extreme degree nowadays. The design process has become more about combining existing references than organically creating a new look.