It’s been two years since Stranger Things last aired, and two years since Mike, Eleven, Lucas, Will, Dustin, and co. faced their fears with the Demogorgon in the Upside Down, and we're buzzing for the third installment of the popular TV series returning this week on Netflix.

The show has already garnered plenty of attention in the style stakes, more recently collaborating with H&M on an official Stranger Things capsule collection, along with 80s inspired sneakers from Nike and a pair of classic 80s dad jeans and letterman jumpers from Levi's (the collection is available in Wellington and Dunedin only).

READ: How Stranger Things Is Influencing Your Wardrobe

As we head into the heat of the summer of 1985 in Hawkins, Indiana, how have the characters grown and how does their wardrobe reflect that growth and the things they've seen and experienced together? Anchoring this new season is the arrival of the new Starcourt Mall.

Highlighting the cultural impact of the shopping malls in small town America during the Reagan era, the mall showcases popular fashion retailers during this time such as JC Penny and Gap, and how malls became a cultural and social centre point for teenage life during the 1980s.

Since the show's debut in 2016, creators Matt and Ross Duffer have cleverly worked closely with costume designers Kimberly Adams and Malgosia Turzanska (season one) and Kim Wilcox (season two) to showcase 80s fashion in a small town American setting.

For season three, the wardrobe is led by Amy Parris who propels the story of our favourite gang through dress, evoking the rising consumerist culture of America during the 80s.

MIKE WHEELER (FINN WOLFHARD)
As one of the main protagonists of the series, Mike’s style sensibilities err towards the mature and preppy, compared to his friends. We see this at the Hawkins middle school Snow Ball where he wore a brown velvet jacket, shirt, tie, and knit vest. While he’s often in a wardrobe of horizontal stripe polo shirts, this time around he’s more grounded in block colours, and his hair has grown out into a longer length. His mature, level-headed nature is reflected in a more grown-up wardrobe, that emphasis his growth as a precocious pre-teen into a pragmatic young man.

MAX MAYFIELD (SADIE SINK)
Moving from California to Hawkins, Indiana was a big deal for Max, the tomboy clearly not happy about her new town in season two. After experiencing the things she has with the rest of the gang, a blossoming relationship with Lucas sees her accept her new environment, even when she has to deal with her bullying step-brother Billy. As the summer comes around, Max brings her sunny Cali style to Indiana in a wardrobe of cutoff denim shorts, tank tops and much more colour than we’ve seen previously.

Expect to see: More optimistic colours now she’s feeling the summer vibes, and her Californian style making an impact. She's a particularly good ally for Eleven when it comes to sharing girly moments with someone else her own age.

WILL BYERS (NOAH SCHNAPP)
After being abducted by the Demogorgon, Will has been through a lot, and his wardrobe is reflective of someone who is still not adept in dressing their age or lacking in confidence. We love the way Mike acts as something of an older brother figure to Will, and we see how the wardrobe is connected to this dynamic – Will wearing his brother Jonathan’s hand me downs while Mike is often wearing clothes that enhance his maturity.

Expect to see: Not much of an evolution, Will’s clothes highlight his slow progression into teenage life, still dressing as he did two years ago. Plenty of horizontal stripes.

ELEVEN (MILLIE BOBBIE BOWN)
The telekinetic teen’s doll dress, oversized jacket, sneakers and box of Eggos look has provided plenty of inspiration for Halloween costumes these past two years, but for season three, Eleven is fully embracing mall culture and coming into her own sense of style, with her hair grown out into a wavy mid-length hairdo and a wardrobe of suitably fun 80s prints, colours and textures.

This is a great insight into how 80s mall fashion really changed the way teenagers approached personal style to emulate their favourite pop stars within a pre-internet era.

Expect to see: A radical transformation form the last two seasons, Eleven is quite literally letting her hair out and having fun with the abundance of colour and kitsch from the 80s. We get to see more of her personality shine through her wardrobe overhaul this season. 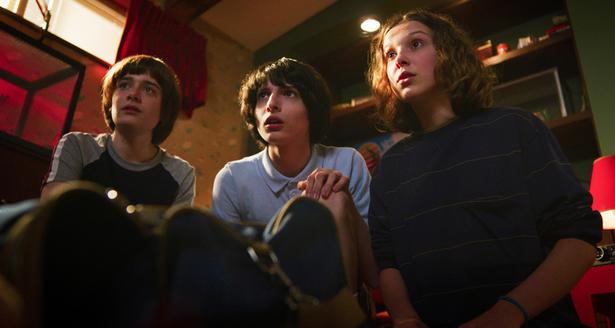 Will, Mike and Eleven. Photo / Supplied

LUCAS SINCLAIR (CALEB MCLAUGHLIN)
Lucas was by far my pick of the best dressed out of the gang, his rust coloured corduroy Levis jacket with sheepskin collar was a highlight form the first two seasons, adding his own spin with a head bandana and utility belt while out riding his bike. It was the ultimate outfit for any kid on a secret mission or adventure (he’s a fan of The Karate Kid), and now in a relationship with new girlfriend Max.

Expect to see: Graphic 80s print t-shirts and a whole lot more ‘adventure’ dressing with Lucas putting his own spin on styling. DUSTIN HENDERSON (GATEN MATARAZZO)
Dustin knows how to wear a trucker cap. The tech-nerd of the group is probably the more adventurous when it comes to fashion, layering shirts over t-shirts and playing with colour and graphic prints. He lets his humorous side show through with his bold choice of colours.

Expect to see: A much more confident Dustin, plenty of irony and colour of course, which is why we love his more joyful and irreverent approach to dressing. 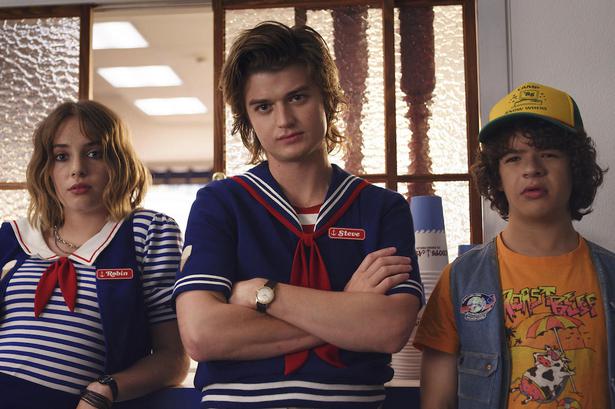 STEVE HARRINGTON (JOE KEERY)
As a major authority figure to the group and forming an unlikely friendship with Dustin, Steve is the cool older brother with the big 80s bouffant. His style is very much a lesson in how to nail 80s denim — stonewash jeans and exaggerated jackets, he does the high-school jock well, occasionally slipping on a Letterman jacket. He's the most 'norm-core' character out of the group — a simple sweatshirt, jeans and pair of Nike Cortez trainers is what Steve does best.

Expect to see: Steve has a job working at an ice-cream parlour wearing a sailor's uniform, so expect to see more quirk in his look as he takes on a more pivotal role in the third series (according to several fan theories online). NANCY WHEELER (NATALIA DYER)
She's still coming to terms with the disappearance of her best friend Barbara, and we see Nancy becoming a crucial figure towards the end of season two in helping save Will's life. She is the ultimate 80s high-school popular girl with her Sloane inspired wardrobe of pretty frill neck blouses, pastel cardigans and jeans. She's the only person on the show who knows how to wear an 80s sweater well. Expect to see: A less 'softer' Nancy given the things that she has experienced, moving on from trivial high-school girl issues. A sophisticated wardrobe that feels much less fussy is what we can expect to see, more graphic prints and colours inspired by the synth music scene. A shorter hairdo will be a major departure for Nancy, giving her a more sophisticated and worldly vibe. 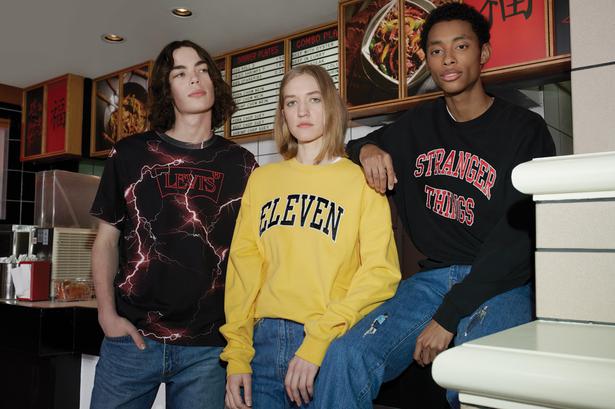 BILLY HARGROVE (DACRE MONTGOMERY)
The new transplant from California with step-sister Max, Billy catches the attention of all the thirsty girls (and mothers) at Hawkin's High School. His rebellious attitude is matched with longer hair and evokes the image of the bad boy in the vein of 80s rock legends such as Jon Bon Jovi and Axl Rose; the 80s version of James Dean in Rebel Without A Cause — tight jeans, piercings and an open shirt slashed to mid-chest.

Expect to see: A summer job as a lifeguard is an opportunity for Billy to get his guns out, wearing short swim trunks that highlight how the 80s were obsessed with short shorts and aerobics culture. Expect a bigger storyline this season for Billy, facing up to inner demons perhaps. He'll always evoke the dark side to the rest of the group, and his wardrobe will continue to reflect that rebellious contrast.

A little bit of old-fashioned indulgence makes for great entertaining. This week's recipes are inspired by what was hot on menu...