For decades Jessica Hansell has built a person. An alter ego, Coco Solid. And she is solid — a rapper that knows the breadth of her territory and expands it.

She had added, to Jessica, director, producer, actor. She is a member of Taika Waititi's production collective Piki Films, and has worked on a portfolio of shows, from cops-take-on-ghosts comedy Wellington Paranormal to comic strip turned animated TV series Aroha Bridge.

She's an author, too. She began her autobiographical novel, How to Loiter in a Turf War, her first, while a Fulbright Creative New Zealand Pacific writer in residence at the University of Hawai'i. Published in May, comedian Rose Matafeo described it as a book that painted a picture of the Auckland she grew up in, “when waiting for the 025 to town was a gamble, and the answer to the question ‘Where are you from?’ was an essay, not a sentence."

"This is like one of my limbs floating out into the world, but I just have to receive and be open to what comes with that, have a shrug and a sense of humour about it. It's one of the most ambitious things I've ever done, so I feel really proud of myself. I've also survived a lot in the last couple of years, so there is a little bit of disbelief that I pulled it off."

She is tethered to it, in many ways, but it is also a profound release — of grief, of celebration.

I’m pretty hard to read out in the world, so I usually make fashion choices that open me up or communicate something on my behalf. Clothes are like custom officers, they’re my social buffer or gateway. When people draw me I usually have big hoops/earrings and long acrylics. I love colour-blocking, cultural clues and the odd private in-joke with myself.

I swing around the gender spectrum in terms of how I present myself. It can be very baggy, sloppy streetwear. The next day I might be fixated on really high-maintenance femme style and beauty. I dress for comfort most of the time but it depends where I'm at.

I think if you’ve been a performer, you know how to dress for a pop-up spectacle, how to bend an impression. On shy days I still wear something fishing for a compliment or conversation, even if it’s tiny.

What's one of your earliest fashion memories?

I loved those stick-on deco earrings, those plastic jewels with a gluey back. I saw a meme ‘If you wore these you’re a baddie now’ and it all made sense.

There was a perfume line for little girls in the 80s and 90s called Jelly Bean, smelt like bright pink. Wardrobe-wise I put my Barbie, Jem and Transformers through absolute hell.

When crafting characters how much of their personal style do you consider when it comes to creating a narrative?

Aesthetic and style is one of the things I start with, it’s crucial. I see them in my mind’s eye. In my book I go deep into the clothes, the body politics and style of each person. There is a scene where they are at the flea market and they are magpies picking clothes off the racks, ground and tables.

To me, it paints a picture of when you were young on a budget and you're still trying to look fly. It’s also that truth that good taste can’t be bought and doesn’t have to cost much. So, fashion absolutely has everything to do with how I create a character.

How does your creative process morph or change between your different pursuits, between songwriting, writing a novel and directing?

Underneath it all I'm always telling a story. I'm always tapping into the things I know. I'm always trying to resonate with the scattered, like-minded people I know are in the world and give them some reprieve, comfort and representation. That can transcend medium; I don’t think artists should deprive themselves of that.

I'm just here to offer a sense of belonging to my people, but more specifically, the small pockets of weirdos. It's quite a similar process in that I take every medium quite seriously. Maybe not the scene politics or industry rules, but I take my voice and responsibility seriously. 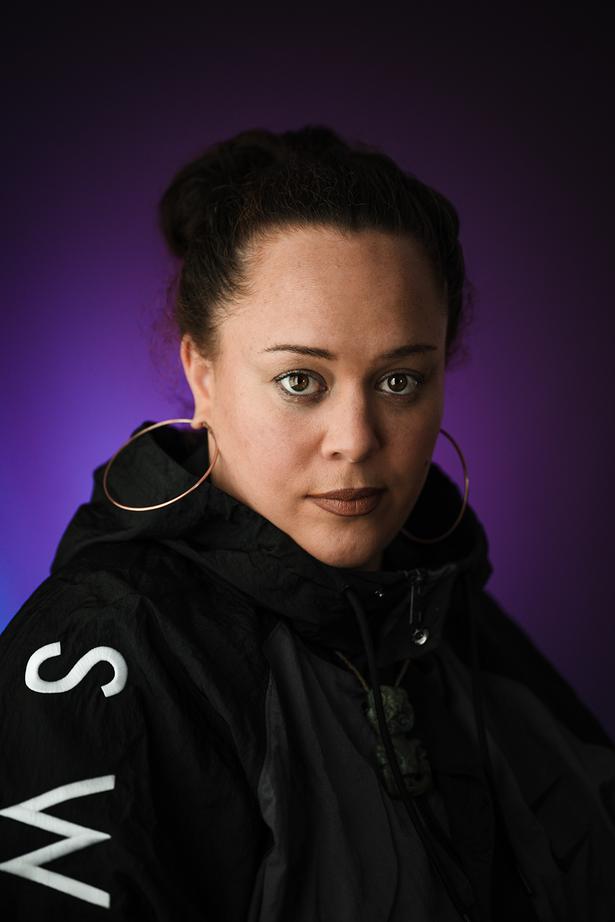 "I think if you’ve been a performer, you know how to dress for a pop-up spectacle, how to bend an impression." Photo / Todd Karehana

What was the genesis of How to Loiter in a Turf War? Where did the idea come from?

How to Loiter in a Turf War is a coping mechanism for a painful time in my life where I was witnessing gentrification in our neighborhood in real-time.

It was affecting my sense of belonging and the cultural roots that had defined the area of Grey Lynn, Ponsonby, Newton, Karangahape, and I was learning to let go of the fact that my grandmother would no longer be living in the area.

So, it was coming from quite an angry and traumatised place. I was also looking back at friendship, especially between young women and young Māori Pasifika women.

I wanted to shake off the public enemy vs. model minority ways we’re depicted. I wanted to show that we are messy, we can be neurotic, we are forced to trauma bond a lot. I wanted to make something for my urban girls in the South Pacific.

What does it mean for you to narrativize your experiences in this way?

I get to bookend eras. I get to grieve. I get to heal, celebrate, and commemorate the things I lost therefore giving them another life. I can find and assign new meaning to things that at the time felt like they were a hardship. I can transform them into something like a book where they then become a different experience altogether.

There's an intimacy to both songs and autobiographical fiction. How do you navigate being at once public and private about your life?

I think there is a saying that "if you want the truth, have an alter ego". I been Coco Solid for decades, so, obviously, she gives me that freedom.

How close to the sun do you want to get in terms of how you experienced something, I guess? There are some bits in it where I'm right up against the sun, speaking to historical fact and telling my personal truth. And there are parts where I'm remixing and making s*** up for sure.

Is there a time of day when you feel the most connected to the world around you?

I think about this a lot [laughs]. Dawn is for the people I deeply admire but can’t quite be. 11am to 2pm always has lots of energy in it for me, that’s my pocket.

But there's something about dusk, which gives us that final desperate rush of the day. Light is still here, it's not too late to be something, be somebody and make this day count et cetera. Gotta love flopping down at night and putting a terrible day in the bin though.

What keeps you grounded?

My cultures keep me grounded, and the pride I take in that. My whānau keep me grounded in the sense that they keep me humbled and reality checked, especially my sisters. My partner is a grounding genius, they have loving rituals, meals and care to offset my burnout moments. My friendships are sacred to me, obviously. Spanning different cultures, generations and callings. My girls can ground me and ease my mind in a heartbeat.

How to Loiter in a Turf War by Jessica (Coco Solid) Hansell, published by Penguin, $23.

Clothes are innately political for the changemaker with boundless potential