"I also wanted the garments to have many different ways of being worn so there is room for interpretation on behalf of the wearer." Photo / Julie Zhu

Clothing — not fashion — is what inspires Steven Junil Park 박준일,  the Christchurch-based multidisciplinary artist and costume designer is someone who takes on each project fuelled by an emotive response.

Whether it's creating fantastical costumes for Aldous Harding's music videos or dreaming up designs as part of his clothing label called ‘6x4’, where he personally makes each piece by hand using mainly vintage, repurposed, or recycled materials, Steven's purist perspective is: "I don't really think of myself as a 'clothing designer'. I'm really interested in all kinds of functional objects and what they say about the human experience."

"Our object culture is one of the things that defines us as a species and I think that is fascinating. Making things seems to be an innate desire and in the current context where everything is so readily available, it feels quite empowering to make something from scratch."

To complement the Auckland Theatre Company's co-production of Scenes From a Yellow Peril, described as "a doom scroll disguised as a play, a meta-analysis of Asian identity, carved into razor-sharp scenes that cut to the cultural quick", Steven has been tasked with creating the costumes that feature in it, an exercise in the creative freedom that close friend and award-winning Chinese-New Zealand writer, actor, poet Nathan Joe entrusted him with.

Describe your personal philosophy when it comes to style.

I think clothing can be an incredibly powerful tool for understanding personal experience. I always try to wear whatever makes me feel the most 'me', this is almost always emotionally driven. It's not something you can think about, it's more based on feelings.

What is one of your earliest fashion memories?

I remember seeing some looks from an Ann Demeulemeester show when I was around 15. I was absolutely blown away, I didn't realise that clothing could be so amazing, so considered and poetic. 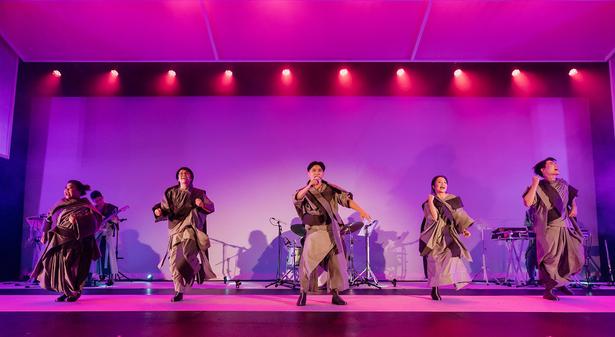 Performers on stage for Scenes from a Yellow Peril. Photo / Andi Crown

Do you have an adornment or item of clothing that is sentimental to you? If so, what is it that makes that piece so personal?

I fell out of a treehouse and broke my arm in 2020. The paramedics had to cut my clothes off me to set my arm. At the time I was wearing a jumper that I bought from an op-shop and dyed. During my recovery, I very slowly repaired the jagged cuts with the limited use of my dominant arm. It was something that I wore around the house but now it's one of my favourite garments.

Your work goes beyond tactile garments — you also explore design in furniture, shoes and homeware. What is something you enjoy making for the home?

I don't really think of myself as a 'clothing designer'. I'm really interested in all kinds of functional objects and what they say about the human experience. Our object culture is one of the things that defines us as a species and I think that is fascinating. Making things seems to be an innate desire and in the current context where everything is so readily available, it feels quite empowering to make something from scratch. 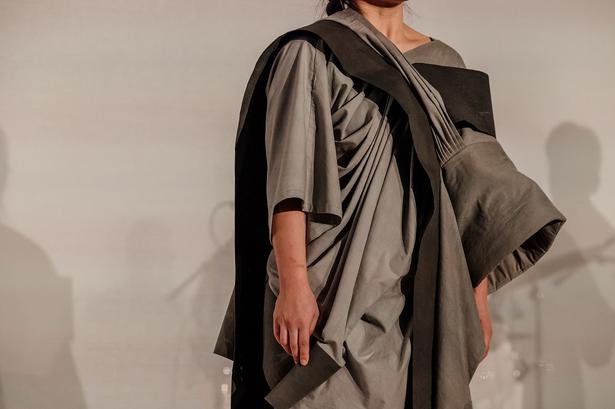 Your work also aims to shake up social divisions in a way that allows people to be who they are in your designs. How have you included this idea into the costumes for the play?

The fashion industry offers a very narrow perspective on what is normal. People of colour don't really have visibility or space between traditional clothing and the dictates of the industry.

Growing up I often felt that there was no representation for someone like me and therefore many others like me. Where in a shop could I find clothing that speaks to Asian diaspora? All I was ever offered were jeans and T-shirts. I wanted to create costumes that take elements from traditional East Asian clothing and abstract them out in search of a hopeful offering to the future where clothing can represent the experience of cultural diasporas, including many different perspectives and experiences of the body.

Performance and movement play a key role in your design discipline. What do you consider when it comes to creating garments?

I spent a lot of energy on the base costumes for this show. I was very conscious that they would be seen on a stage at quite some distance and under unnatural lighting. I thought of them as abstract paintings, using the fabric like brush strokes that create dynamic compositions from all angles as the actors move around the stage. I also wanted the garments to have many different ways of being worn so there is room for interpretation on behalf of the wearer.

How much of your Korean heritage is embedded into your work?

I was born in Korea and we moved to New Zealand when I was six months old so I never had a lot of exposure to Korean culture. Learning about traditional Korean craft practices and traditions has been hugely informative to my work and sense of self.

I never felt at home in either culture so I found a sense of comfort and a lot of creative freedom in non-belonging, in the negative space between these two identities. 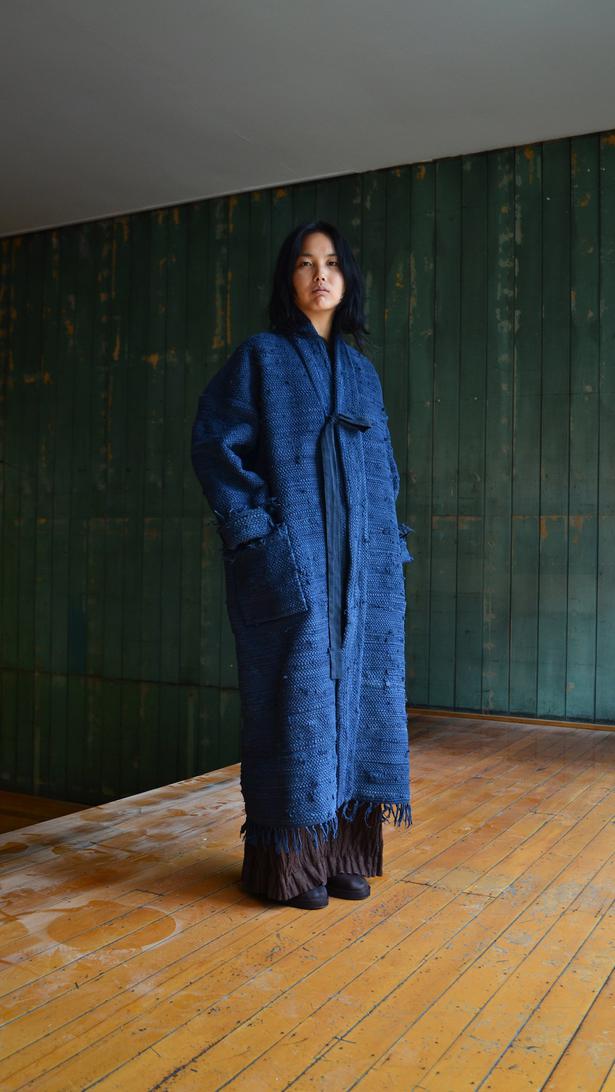 You like to work with recycled materials and vintage pieces to create one-off items. What do you love about this method of working and the message it offers people?

There are huge ethical problems with the fashion industry both socially and environmentally. It is impossible to ignore this context while creating clothing today; there is already too much clothing in the world.

I find second-hand materials much more interesting as they have a story, they have stains and tears and marks and threadbare areas that need to be taken into consideration. I find materials that appeal to me and try to figure out what they want to become. I want to make things that are a conversation between maker and material.

You've worked internationally for brands such as Comme des Garcons — what are some of the greatest lessons these experiences have taught you?

That I didn't want to work in fashion. Fashion and clothing are not the same thing. Working in fashion allowed me to realise that I'm interested in clothing as a human phenomenon rather than the industry. I learned a lot working for Comme des Garcons and I love Rei Kawakubo's work but at the end of the day, fashion is just business. I wanted to see if ethics were a big part of the conversation in the industry and I was disappointed but unsurprised to see that they weren't.

For Scenes from a Yellow Peril, what was it like working with Nathan Joe and the cast in creating visual cues through costumes for the play?

Nathan is a very close friend. He asked me to be a part of this very early on so I have been thinking about it for a long time. He wasn't actually involved in the design process at all, I think he was just focusing on his role as a writer and performer.

The director Jane Yonge gave the whole design team pretty much complete creative freedom, only offering guidance and insight. Her trust was really admirable and appreciated.

It allowed me to dream big and make what I felt I needed to make as a close friend of Nathan's and someone who really cares about the play, rather than what I thought should make as a costume designer. 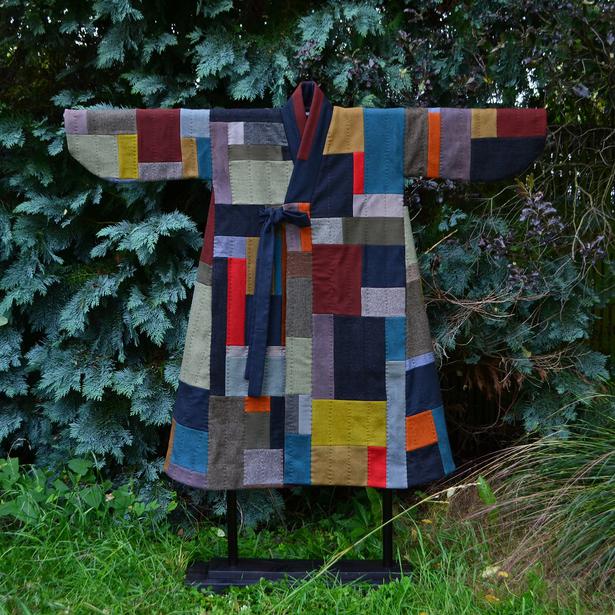 Is there a time of day when you feel the most connected to the world around you?

Between 4-6am. But I'm not up that early/late very often. Sunsets too.

Smell is something else you are exploring with a perfume. Tell us about what we can expect.

My first perfume CAVE was made by Nathan Taare who does Of BODY. I made the lids from volcanic stone for each bottle. I've been developing the next one with him and this time I'm in conversations with glass artist Jane Park of Soraa about getting custom bottles made. I'm also thinking about kites for the campaign film! 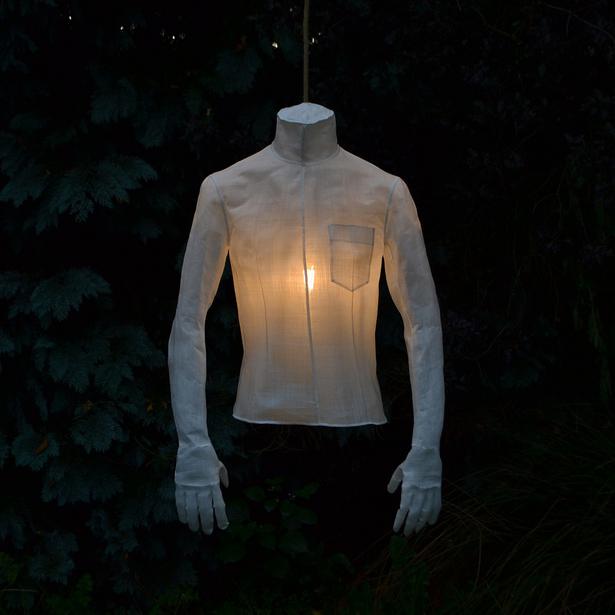 Steven's latest work is on display at Objectspace. Photo / Supplied

What keeps you grounded?

Being alone. Being in nature. Swimming. Cooking. Singing. My friends.

Tell us about the piece you are making for your Objectspace show.

The show is on now until August 21. I made a life-size replica of my torso out of stiffened woven ramie with a light inside. The whole thing is hand-sewn with cotton thread using sewing techniques used in jogakbo (a traditional Korean style of patchwork).

The patternmaking references Western tailoring while the technique and textile draws on Korean traditions.

Scenes from a Yellow Peril is showing now at the ASB Waterfront Theatre until July 3.

The Tauranga-based singer on the dress hanging on her wall as art, and when you know a song is finished