There was a time when when getting dressed for a Hollywood awards ceremony was a lot of fun. The general approach used to be: choose outfit which makes you feel gorgeous and glamorous, turn up, get photographed. Job done.

Last week, I pored over some vintage looks from previous Golden Globes Awards — such as when, in 1991, Julia Roberts wore a Giorgio Armani suit (“I had a very whimsical sense of style,” she later said. “I clearly didn’t care what anybody thought about it”), as well as Grace Kelly’s 1956 cheongsam and Jane Fonda’s 1979 shirt and bow tie.

Ah, how times have changed. Not only is the red carpet now huge business, with millions changing hands in fashion, beauty and jewellery contracts for the actresses deemed to be les plus stylish (talk about pressure...), but it’s political, too.

Monday night’s ceremony came a year after Hollywood’s leading women united against sexism to launch the Time’s Up campaign, raising funds to fight sexual harassment and creating more awareness of inequality in the wake of the Harvey Weinstein scandal. Conscious of the red carpet’s double bind (yes, women are paraded to the world in glitzy confections, but it’s also an excellent source of added income and influence for many of them), the world’s most famous actresses took to the red carpet in black versions of all their usual finery. Couture ateliers were said to be working to the very last moments to run up black gowns. Though many onlookers were initially sceptical, it turned out to be a rather chic protest moment.

To this year, and although actresses sported “Time’s Up x2” wristbands alongside their Chopard/ Tiffany/ Piaget diamonds, no such decisive dress code was in place, making things arguably more puzzling than ever. Could everything return to fairytale normality? Or would it be quite nice to do black again in the spirit of maintaining momentum? Was it possible to move on but retain a sense of feminist meaning?

“Ultimately, after last year’s Globes, the red carpet should now be seen as a celebration of femininity and appreciating talented ladies,” says Chloe Hartstein, the stylist behind Glenn Close and Melissa McCarthy’s red carpet strategies. “We can be strong, opinionated women trying to make a change and, at the same time, look however we want to look.”

And so it was that red-carpet confusion reigned at the Golden Globes... but in a rather glorious way. The remnants of last year’s theme were evident but there were also plenty of joyful antidotes and alternative messages. These were the takeaway trends. 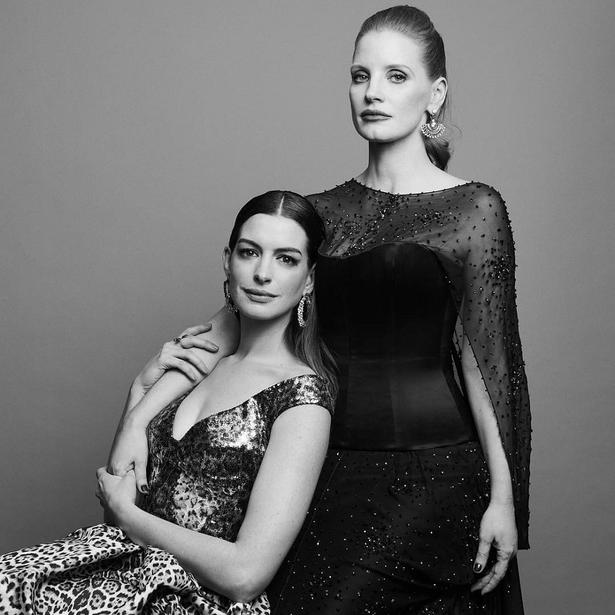 Back To Black
Is black making a fashion comeback thanks to last year’s red-carpet blackout, or is it making a comeback just because it’s chic, easy-to-wear and a suitably sombre reflection of current state of world flux? It’s tricky to decipher exactly, but that makes it a convenient, play-it-safe, Time’s Up-conscious yet also very fashion choice for this year’s red carpet crew. Hurray!

Nowhere was this better crystallised than in Killing Eve star Jodie Comer’s embellished tulle Ralph and Russo look, which was undoubtedly a nod to Villanelle’s practically cult pink Molly Goddard dress. Jessica Chastain had the honour of being the first to wear new Burberry designer Riccardo Tisci’s designs on the red carpet; in her silk corset and hand-embroidered chiffon cape, she looked immaculate.

The night’s two Best Actress winners (there’s a gong for both comedy/musical and drama at the Globes), Olivia Colman and Glenn Close both channelled nun-meets-regal elegance; the former in twinkly, mesh-shouldered Stella McCartney, the latter in a plush velvet Armani Privé cape.

Should you get the look? Black has fashion nous again, so do give it a whirl — but navy might be more forgiving. 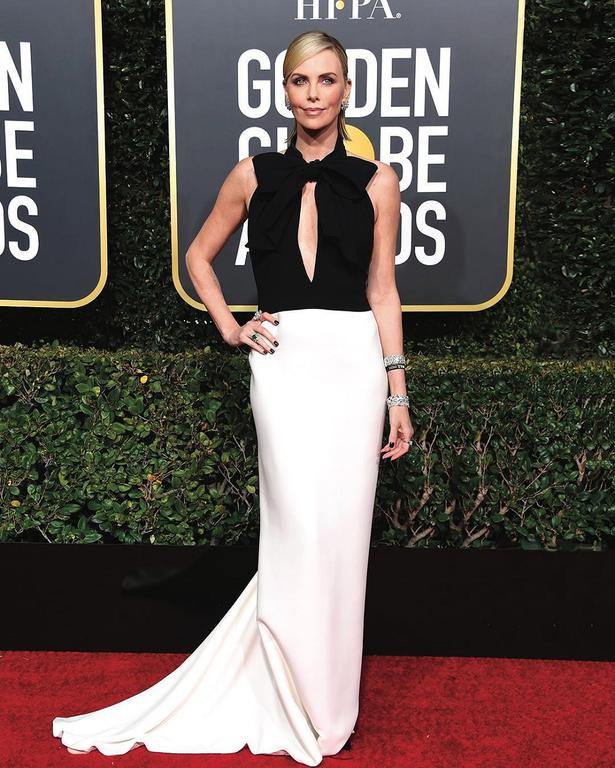 Women In White
If black seemed very last year, but to ignore the whole protest-dressing question left a bad taste, then white was a very beautiful solution. Its association with the suffragettes has been revived in recent years by everyone from Hillary Clinton (who was definitely riffing on its historical significance during her election campaign) to Melania Trump (who may or may not have understood the meaning when she wore it to her husband’s State of the Union address soon after the Stormy Daniels scandal broke). 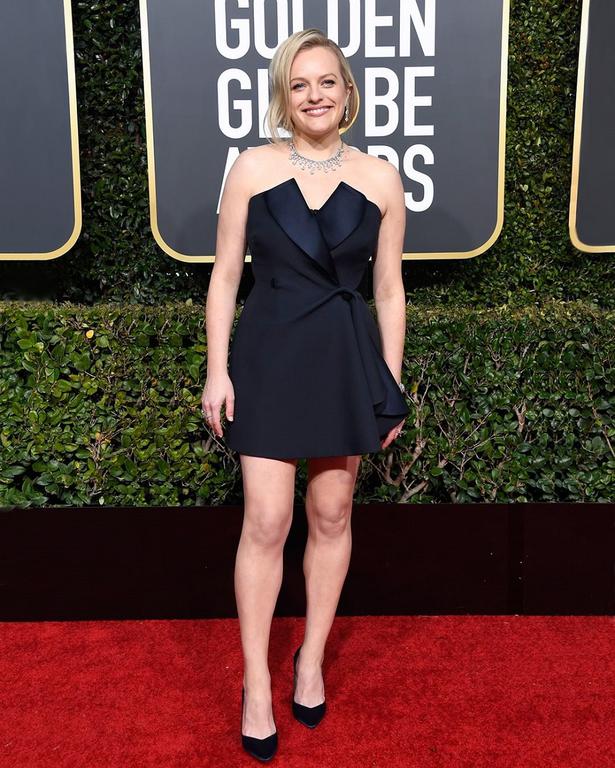 Black And White
A sub-category of the separate black and white strategies, the BW approach speaks of conservative chic. Well, it did in the case of Charlize Theron, who did old-school statuesque glamour in Dior.

Rachel Weisz zhuzhed things up a bit in her Céline by Hedi Slimane column skirt meets ruffled bodice concoction, which was a fitting reference to her role in the 18th-century romp, The Favourite. For those interested in fashion-industry minutiae, it was one of the biggest A-list shows of support thus far for the French design house’s controversial new designer. Thrilling. 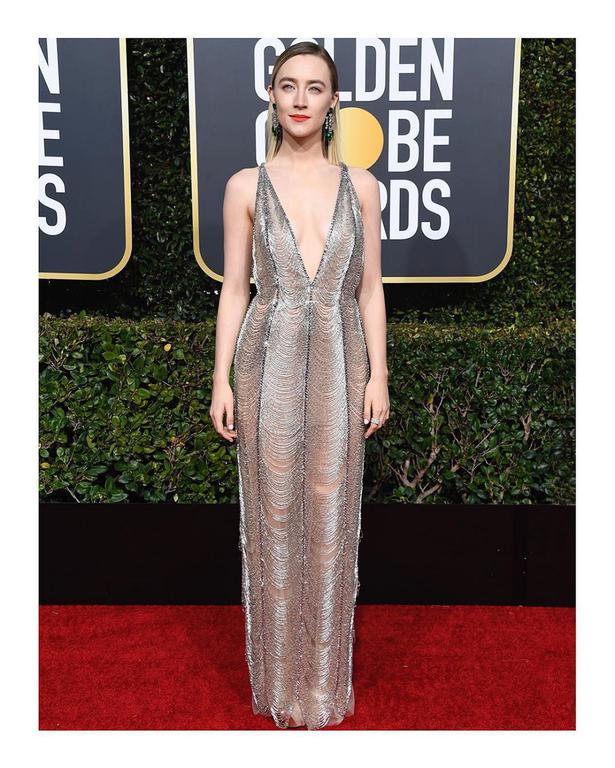 Passionate Red
Vibrant, passionate, angry but also sassy, defiant red was the most popular choice at last year’s Golden Globes for the very few who rebelled against the black diktat. This time, Fleabag and Killing Eve creator Phoebe Waller-Bridge nailed the look in her scarlet sequinned gown by London label Galvan. Nicole Kidman’s Michael Kors had a similar vibe but was a little more demure, thanks to its high neck and claret hue. Laura Dern joined the Valentino army (by far the standout label of the night) in a sea creature-esque, scalloped creation.

Should you get the look? It may look a little terrifying, but red is actually a very flattering colour — you just need to get the right shade for your skin tone. A bright tomato is gorgeous on blondes, greys or dark skin colours, while deeper burgundies work on brunettes. 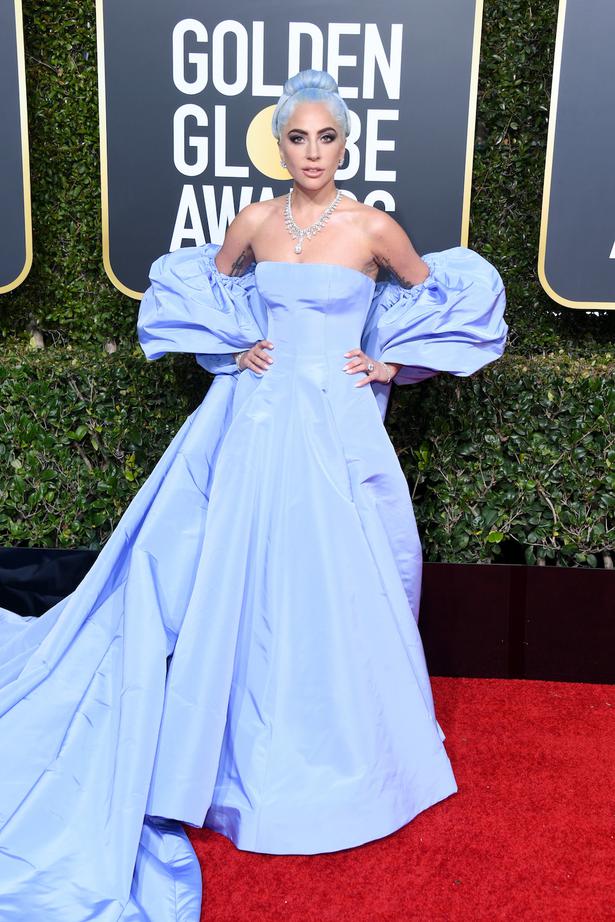 Let’s Hear It For The Boyish Girls
Given that they’ve become a default rebel option of late, I was surprised not to see more trouser suits on the red carpet. And yet there were two excellent examples of more masculine dressing.

Firstly, Julia Roberts sported a refined update on her 1991 Golden Globes suit in cigarette trousers and a tulle bodice by Stella McCartney — this was probably the most “you could actually try this in real-life” look of the evening. Then there was Kidding star Judy Greer, who brought brilliant pizzazz to this approach in a double-breasted Alberta Ferretti tuxedo and bow tie get-up.

Should you get the look? Absolutely! There are bountiful blazer options in the shops at the moment. Michelle Yeoh wears the same Shiatzy Chen dress that she wore to the Met Gala in 2015. Photo / Getty Images

The Vintage Dreamers
Herewith, the Mary Poppins school of style thought: it may be flouncy, pretty and seemingly devoid of any meaning, aside from “I am lovely”, but perhaps, as with the Banks family, a fabulous flashback is exactly what we all need right now. Seeing Lady Gaga in spectacular periwinkle Valentino — a tribute to Judy Garland’s costume in the 1954 original A Star is Born — was quite the Monday morning tonic.

Serving up a slightly subtler interpretation of vintage gorgeousness were Claire Foy, in primrose art deco Miu Miu (she reminded me of Austrian actress/superwoman Hedy Lamarr), and Rachel Brosnahan, in Prada, creating a happy, yellow microtrend between them. Elizabeth Taylor would surely have been proud, too, of Anne Hathaway in leopard Elie Saab, and Debra Messing in feathery Pamella Roland. 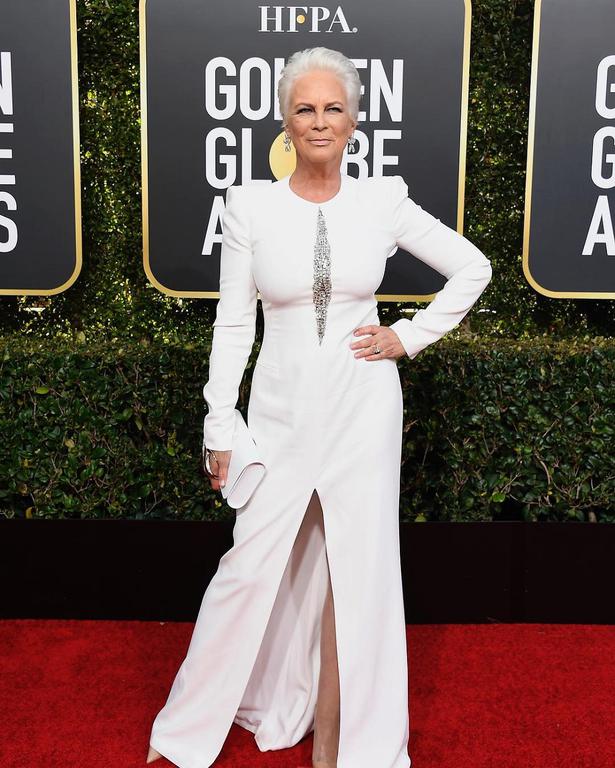 Understated Glitz
For those with a reputation as a solidly dependable, definite ‘best dressed’ person to uphold, the only way was sparkles on Monday night. But think more “starry night” than Strictly: as such, they were at once understated yet glamorous.

Emma Stone opted for a long-sleeved chiffon design by Louis Vuitton, with elegant crystal embroidery; Emily Blunt’s gold brocade Alexander McQueen had a subtle shimmer to it; Saoirse Ronan’s Gucci was a silvery slip of a thing; and Thandie Newton’s Michael Kors glistened with an astral pattern. Also wonderful was Lupita Nyong’o, whose Calvin Klein dress had something of the icicle-adorned cave about it.

Should you get the look? Party season may be over, but what could be more cheering than a little glitz and glitter here and there? Maybe avoid an entire spangled gown and go for socks or a jumper instead. Star Recycler
A final shoutout to Crazy Rich Asians star Michelle Yeoh, who tapped into the sustainable style conversation by wearing the very same grass-green Shiatzy Chen dress that she debuted on the red carpet at the Met Gala in 2015. She accessorised with another familiar piece: the gobstopper emerald ring that appears in her film. It turns out that it’s from her own jewellery collection and came to have its starring role after she rejected the options called in from jewellery houses for not being dazzling enough. Isn’t Michelle now your new favourite person?

The Biggest Fashion Moments That Made Headlines In 2018

The Most Iconic Fashion Moments at the Grammys

From the weird to the wonderful, we look back on the most iconic red carpet looks at the Grammys