We spoke to Frederic Tcheng, the director of the fashion documentary Dior and I, before its screening at last year's NZ International Film Festival. As it gets a wider release in cinemas around the country, revisit our conversation with him below.

HOW THE FILMING COME ABOUT
"I met Raf for the first time when he entered the room at Dior and I was filming. I did have a connection to Dior because I had co-directed a film called Diana Vreeland: The Eye has to Travel, and when we showed it in Paris we had a private screening for fashion VIPs, and someone from Dior was there - Olivier Bialobo, the head of communications, and it was a very particular time in Dior's history; in between designers and there was a lot of speculation about who was going to be the new designer and take the helm. I knew that Raf was one of the candidates, and I questioned Olivier about it, and he said he didn't really know himself.

I knew that if Raf Simons was going to take the helm, it was going to be a really interesting situation. I was fascinated by Raf Simons. He is such a different, unique designer in the fashion landscape; he's very forward looking and his whole process is very collaborative, it's very different from other designers. Also, his approach to the media was very different. He was not well known, in the sense that he let his work speak for itself and he didn't really put himself out there in the media; he hardly did any interviews. That was very interesting to me - the few interviews that were out there, made him even more intriguing and fascinating because he seemed more like an artist than a designer.

I knew that if he took the helm of Dior, there was a premise for a good story - these were such different forces. Raf Simons is very forward looking and Dior is steeped in tradition, so I thought, these two forces are going to crash in an interesting way.

That's what I pitched to Dior, who put it to Raf, who was very reluctant and not interested in having a film made about him or having a camera put in the room for eight weeks with him. But he was at least willing to meet me. I sent him a letter to try and convince him, and he invited me for one week to see how it would go.

He said that he found it embarrassing to have a camera crew follow him, and a film made about him; which is a very Belgian thing! If you think of the Belgian designers - Margiela, you've never seen his face - they have this relationship to the media that is unlike any other country. In fashion, especially, you're used to people putting themselves out there - you would never think of Valentino running away from a camera; he loves being a star. But Raf Simons, a very different story. I don't think he understands the media and celebrity driven world; he prefers to work and let the work speak for itself."

THE FILM'S FOCUS ON THE CREATIVE PROCESS
"Raf understood little by little that I was interested in the work - I was not interested in propping him up as a new star, making a caricature out of him. That is something that he kept on repeating in the beginning: he said, "Fred, don't make me a caricature; I see that very often in documentary films where the film maker takes one angle on a person". Once he saw that I was there to portray the work, and the creative process, he let me in little by little."

HOW MUCH HE FILMED
"I was very stressed out about not having enough material - only shooting for eight weeks. On Valentino: The Last Emperor for example, we shot for a year and a half before we had a full story. I was worried that I was not going to have enough material, so I shot a lot.

We would get there in the morning very early at 8am when the seamstresses would arrive, and we would leave at 10 or 12pm when Raf would leave the building. It was very intense. I think we had 270 hours of footage at the end, which we had to narrow down to 90 minutes."

MEMORABLE MOMENTS THAT DIDN'T RUN
"There were a lot of moments we weren't able to include: one thing was the creation of the flower wall, which we documented. We went to the flower market outside of Paris, this huge building where they store all of the flowers for all of France, basically. We had a lot of footage of them selected the flowers, that was fascinating as you see the skill of it.

The seamstresses were also really interesting - I was interested in getting into their personal journeys. One day we went to Florence - the head seamstress who wasn't always happy and positive - we went to her house, she lives two hours away from Paris. We followed her on her morning commute from her house to Dior headquarters, which took 2 hours, morning and night, that's what she deals with."

WHAT SURPRISED HIM MOST ABOUT RAF
"I think what surprised me the most was the respect he has for other people's creative processes. He understands that collaboration is an asset, and that he can rely on other people and inspire other people, and edit what they produce. It's a give and take. With the seamstresses, he often said that he was learning a lot from them, and that they were learning a little bit from him as he was trying to push them in a modern direction and trying to change their ways. I really appreciated that. That is also true for the film; he was very respectful of my positions"

Read More:
• Film Festival: A rare look inside Dior
• One-on-one with Raf Simons, one of the most important designers working today

ON RAF & HIS EMOTIONS
"He is a very emotional person; his friends all say that he is someone who is very connected to his emotions. Even though he can come across as serious or withdrawn or reserved; he's a very warm person, and he lets his emotions show in real life. The level of stress was so high that it was hard for him to suppress emotions towards the end."

THE MUSIC IN THE FILM
"We were interested in a contrast between the past and the present - between Raf's modernity, represented by minimalist music, and a score that represented Christian Dior, the history of the house.

For that we worked with Ha-yang Kim, who composed something really haunting and really beautiful that supported the almost ghost like quality of Dior himself and the archival images we were used." 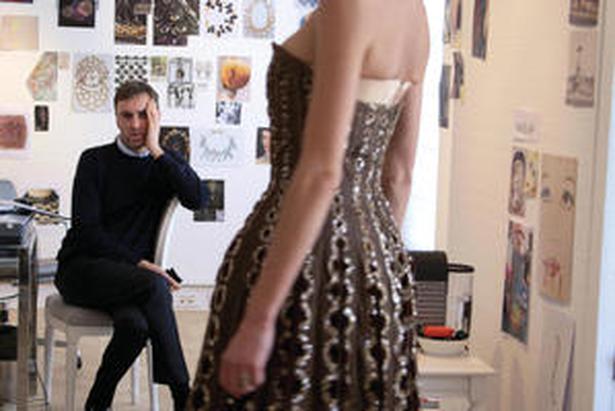 Raf Simons in Dior and I. Picture / Supplied

THE VOICE OF CHRISTIAN DIOR THROUGHOUT THE FILM
"I realised very early on that the voice of Dior was going to be incorporated in one way or another. When I did research, I was reading Dior's autobiography, and I was really struck by the candidness. He wrote it right before he died, and it is really touching - you can see him reflecting on his work, as a designer, but also his image as a designer. When I met Raf, it became pretty obvious that he and Christian Dior shared a lot of the same fear about being exposed in the media; the same sort of feeling of alienation when suddenly people recognise you on the street and think you're a star.

I was interested in linking the past to the present; and how Raf was experiencing this. When we put Christian Dior's voice over it, it seemed like he was talking about what was happening to Raf. It also created this feeling of a haunted house. History is repeating itself, and Raf has to deal with that: embrace the past, but also steer the house into the future. He had to find his own voice, despite being haunted slightly by the voice of Dior."

RAF'S RESPONSE TO THE FILM
"He was very moved by the film, even though he was a little bit freaked out to see himself on screen for 90s minutes, being such a camera shy person, but the first time he saw it he basically cried for most of the movie, and was very supportive of what I had done. He told me recently that he thought about asking me to remove certain things, but he refrained from doing that - there are some scenes that are more painful for him to watch than others. We've become a little bit closer since the movie has premiered; he says we can be friends now but at the time he didn't want to be too close because he didn't want to influence my decisions."

CHANGES IN RAF SINCE THE FILM
"He has changed a lot - the publicity was the biggest change in his life, and that whole level of exposure. The shows, they were no longer intimate shows [like his menswear or Jil Sander shows], this was on a much bigger scale; everyone was there - all the fashion designers came to pay their dues, whether it's Pierre Cardin, Riccardo Tisci, Marc Jacobs, Alber Elbaz - they were all there to watch his first collection. He was really humbled by this, you could tell that this was a big deal.

WHY FASHION FILMS?
"I sort of fell into it - my first love is film. I didn't know that much about fashion when I started working on Valentino: The Last Emperor. I really respond to stories and characters, that's what I want to make films about; and I found incredible stories and characters in the fashion world. I don't know why that is - I think maybe that everything is bigger than life in the fashion world, and also because everything is out there for you to see. As Andy Warhol said, it's "deeply superficial" - he said it about himself, but you can apply it to fashion also. You can see a lot of what is going on in society through fashion.

I see a lot of parallels in fashion and film - Dior and I might be talking about my creative process, and what you go through as a creative person when you collaborate with people and you have to present to the public. Every creative person goes through the same thing."

WHAT NEXT?
"I'm trying to challenge myself, in not doing another fashion documentary! I'm writing a screenplay right now, which is very different and very challenging."

The Raf Remix at Dior

A radical approach to tradition is the perfect blueprint for today's Dior woman, writes Dan Ahwa from Paris