Julianna Margulies as Alicia Florrick and Chris Noth as Peter Florrick in the final episode of The Good Wife. Picture / CBS/Getty

In those final moments of The Good Wife, when Alicia Florrick walked down that bright white hallway framed by red pipes, she did so in a black Giorgio Armani jacket with a small peplum that had been tailored to the last millimeter. It did not look especially comfortable, but it was lean and aerodynamic and stirred up connotations of power and armour. That is precisely what Daniel Lawson, the show's longtime costume designer, wanted.

As Alicia, played by Julianna Margulies, walked into her future, the jacket was meant to both contrast with and reflect the past - that moment when audiences met her in 2009 as she stood beside her disgraced husband. Back then she was wearing a brown houndstooth suit that had been custom-made for the TV series, thus no actual design house bore the responsibility of creating a jacket that was so purposefully boxy, frumpy and unattractive. Louise Frogley, the costume designer who worked on the pilot before Lawson came on board, commissioned it.

"That houndstooth jacket for the first scene in the first episode is so ingrained in my mind, I didn't have to go back and look," Lawson said Monday, the morning after the finale aired in the US. "The black Armani felt as far away from that suit as one could possibly get. With the little peplum, suddenly there's this beautiful silhouette. It's very clean. It was silk faille, and it had a sheen to it. This was hard-edged.

"But she still ends up with the slap. There's still emotion, and her personal life is still coming into play," Lawson says. In that suit, there is the message that "no matter how far you think you've come, you don't travel that far from where you started."

The colour palette for the finale was a contrast of darkness and light - of sobriety and optimism, of reality and dreams. In Alicia's conversations with the ghost of Will Gardener (Josh Charles), he is dressed in shades of taupe and gray, and she is wearing beige and dove gray. "Memories are so sort of golden. They have an aura about them," Lawson says. He wanted the aesthetics to reflect that lightness of nostalgia, the wistfulness of what might have been.

The reality is dark and foreboding. And when Alicia, Diane Lockhart (Christine Baranski) and Lucca Quinn (Cush Jumbo) gather to consider their defense of Peter Florrick (Chris Noth), they are all dressed in dark hues. In one particular scene, when the women gather to rescue this man-in-distress, Diane wears a navy speckled Oscar de la Renta jacket, Luca is dressed in an Alice and Olivia jacquard dress and Alicia is in Lafayette 148.

"They were of an ilk," Lawson says. "They know they're playing loose with the law a little bit." The question at hand is how far will they go? What will be the collateral damage in their zealous defense of Peter?

For the climactic hallway scene Diane wears a gold, metallic knit Escada suit. There is a softness to the silhouette. No hard, protective edges. Still, Diane's ensemble speaks of success, accomplishment, confidence and femininity. "I wanted you to see Diane in the sea of cameras," Lawson says. But the choice also "echoes the memory of the past, when things were great." Or at least they had the potential to be.

Most of the clothes were not purchased precisely for the finale. They were pulled from the characters' "closet," the wardrobe that Lawson assembles at the beginning of the season. His selections have served as an inspiration board for no small number of professional women, whose TV style could slip into a real-life law firm and who wore the sorts of labels - St. John, Escada, Armani, Lafayette 148 - that speak to working women. First lady Michelle Obama even wore a Michael Kors suit that mimicked one Alicia had worn earlier.

READ: Power Dressing: How do Women Dress to Get Ahead? 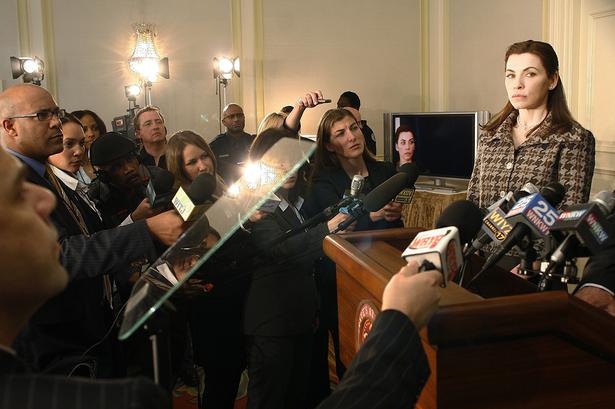 The characters' wardrobes evolved, of course, as the characters themselves did. Lucca's style became a bit more refined and corporate as she moved deeper into the world of a big law firm. She backed away from the bold prints of her anything-goes bond court days. Diane was the show's fashion alpha dog.

"She could wear the big necklace or wear the leopard suit," Lawson says. Diane was making the rules and so she could break them - or simply redefine them for the women in her office who admired her.

Alicia transformed from a woman whose clothes could have used the help of a tailor into one whose attire was more body-conscious, sleek and sophisticated. The only exception as the series progressed was when Alicia was on the campaign trail. Her clothes tended to be brighter and less streamlined. Lawson wanted to make it clear that Alicia was putting on a costume then, a "political costume." When she worked from home, the clothes remained tailored and professional, but had just a hint of ease. Lawson began to ask, "Is it comfortable?" It was a question he had not posed in other seasons.

"That black Armani suit at the end does not look comfortable. And I think that's important," Lawson says. But it does look good.

The suit is sculpted. And after the humiliating slap, Alicia straightens her shoulders and tugs her jacket down. The silhouette looks as if it has been hewn from granite - strong, glinting, indestructible. She is alone after that complicated slap. She looks powerful and independent. Has she risen above it all or simply survived and learned the skills to join in the fight?

In that last scene, Alicia's appearance is stark. There's no necklace filling the space where the jacket's lapels are folded back. She wears tiny diamond studs. And her wedding ring. Nothing distracts from her power-suited audacity.

The aesthetic of the show, which debuts in June, was inspired by the pale limestone of the many memorials and by openness of the skyline. The goal will be to once again make sure the clothes are "legitimate and appropriate," but dynamic enough to nudge the story along.

10 Recipes for Cooking with Wine

The Smartest Leather Pieces to Wear to the Office

Whether your workwear is corporate or casual, these leather pieces will bring polish to your day to day