The star of fashion month was the jacket - or rather, several of them. Here are the styles to try now

If the past 10 years were all about the dress reclaiming prime position in millions of women’s wardrobes, as it morphed from bodycon, Roland Mouret-inspired precision-cutting in 2009, to the billowing, high-necked, midis and maxis of now, the next 10 could be the decade of the jacket.

Jackets have been making inroads for a couple of years at least. But if the shows over the past month have made one conclusive point, other than turning hand sanitiser into a fashion must-have, it’s that the jacket, in many iterations, is here for the foreseeable. Anyone familiar with their virtues knows that, provided you choose one that suits your shape and feels comfortable, the jacket should be one of the most versatile items you own.

Like the dress, the jacket is proving to be endlessly accommodating in its ability to shape-shift. Three years ago, when it began its move towards the mainstream, it was all about the blazer. Oversized and double-breasted, it seemed to be more about making a statement than becoming a trusted friend. The Fashion Blazer was something you put on in the morning to look bold and of the moment — and often took off as soon as you sat at your desk, because of its bulk.

Now there are so many versions, you can keep it on all day. Oversized is still an option — more exaggerated than ever. If this is a boyfriend jacket, then boyfriend has been working out every night and might want to cut back on the steroids. At Balenciaga’s apocalyptic flood-stricken show (the deluge was deliberate, not a cruel trick by Mother Nature), models waded through a dark, dank stretch of water that left the front three rows of seating submerged in water. What to wear when there’s no Noah’s Ark? Shoulders as wide as rafts, with turned-up edges that sat above their natural shoulder-line like lifejackets. No one, unless they’re very tall or an influencer hellbent on getting noticed, probably has the energy to deal with this option. But as a comment about clothes’ ability to make you feel mentally stronger in tough situations, it landed.

The more practical takeout is a jacket that’s roomy enough to wear with the other standout star of autumn/winter 2020‘s shows: the Trophy Jumper. The latter is a considerable item to fit into your wardrobe. Immensely cosy, seductive and often intricately crafted, it’s also quite unwieldy. If you’re planning on wearing it with a jacket, you’ll need a roomy one.

My advice is to take the middle road: layering knits underneath tailoring isn’t just a stylish solution to weather dilemmas, but a way to offset the formal tendencies of a jacket. In theory, this is soft power in action.

The Power Jacket is still one of the most common sartorial tropes of our time. We’re always being told that a jacket makes us feel more mentally pulled together. A well-cut one certainly makes us look slicker. It may even alter our posture, which can affect our mood. Margaret Thatcher, who, according to recently released pages from her personal diaries, never left anything to chance when it came to her clothes, named her most important outfits according to the most memorable events at which she’d worn them. 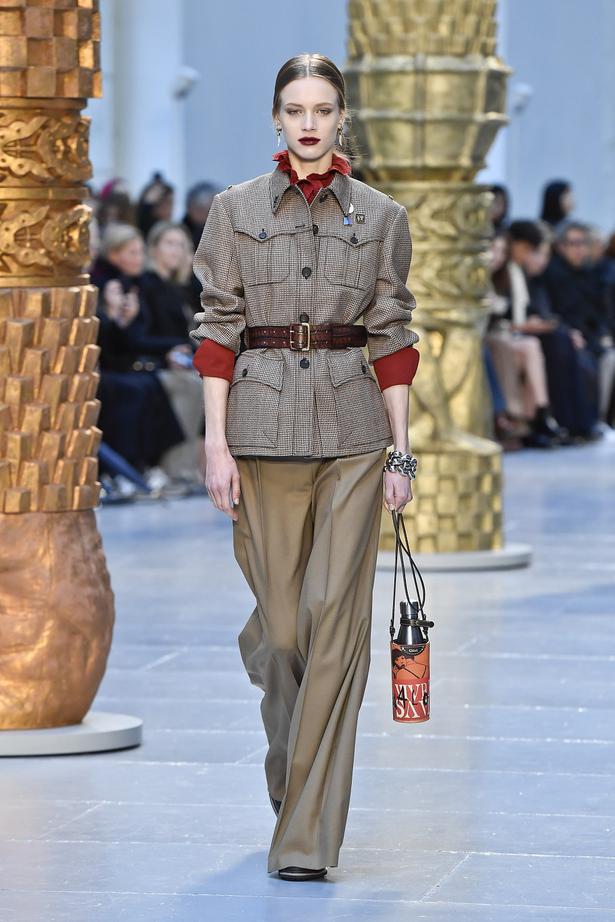 There was the Pink Chanel Gorbachev (a suit). There was the Wogan Long (a suit) and the Wogan Short (a suit), all of them featuring jackets. The jackets of the Eighties and early Nineties, whether they were round-necked Chanel-inspired, or with lapels, were all about proving a woman could fit in or, better still, excel in a man’s world.

Now, reflecting more complex and often contradictory views on gender and hierarchy, jackets are more varied, from Balenciaga’s didactic statements to Dior’s cute, checked, boxy jackets that have the gentle shrug-on appeal of a cardigan. In between is a spectrum of desk-and-dinner-friendly options to fit every lifestyle. There were plenty of exaggerated shoulders, but also many alternatives. At Alexander McQueen, Sarah Burton has softened the shoulder-line and the result is a much less aggressive-looking tuxedo that also seems more elegant.

READ: Why A Slip Dress Is A Wardrobe Essential At Any Age

At Loewe, creative director Jonathan Anderson made the often constricting jacket-skirt suit into a desirable, sophisticated and fluid alternative to the dress. (So many options in two items that can be worn together or apart and those soft peplums, by the way, are extremely flattering.) At Mulberry, which last week had a presentation in Paris, a speckled, belted jacket with sloping shoulders, and a delightfully fuzzy, shimmery textured one (worn with matching trousers) proved the evening suit doesn’t have to be an angular tuxedo. The Mulberry jacket suit is feminine and androgynous, with medium-sized lapels and an optional, detachable extra collar tie to add to the blurring of rules. 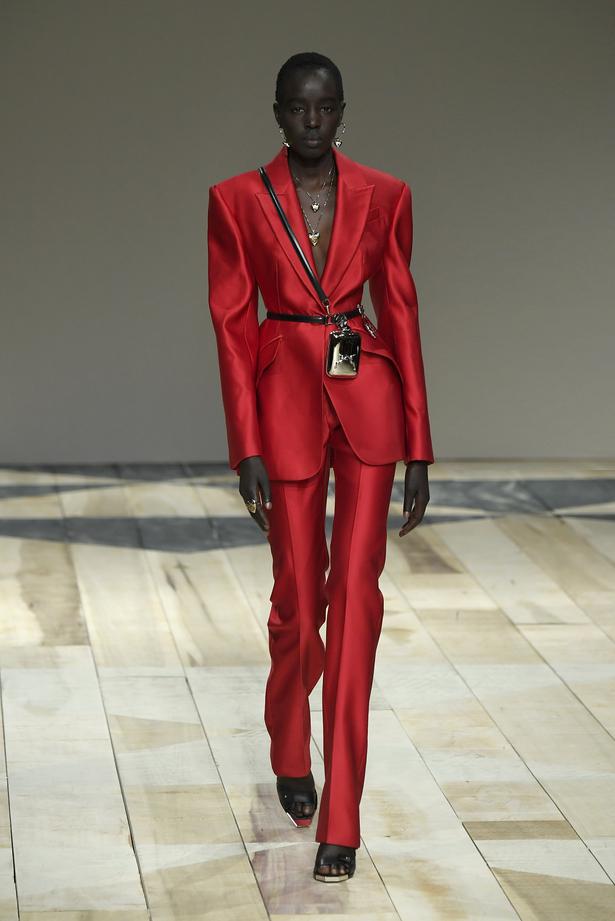 My personal favourite, however, might just be Chloe’s safari-esque micro-checked jacket, worn with wide, gently tailored trousers. It has a subtle sportiness and sophisticated ease - flattering without overly defining the body. The mismatched suit is the way to go. Unless you want to wear a blazer over your dress, a popular catwalk combination (look for thigh-length jackets if you’re wearing midi or longer dresses).

Wide lapels are the most current, often to the tips of shoulders. But this isn’t — or shouldn’t be — for everyone. According to Anna Berkeley, the personal stylist whose body-mapping service I wrote about last weekend, if your shoulders are broad in comparison with the rest of you, a mid-range lapel is the most flattering choice and makes shoulders look in balance with the rest of you (ie, roughly the same size as your hips).

Belted jackets are everywhere and an easy way to ring the changes. Talking of power - what does that look like now? If you’re a millennial working in tech, it might look like an RRL hoodie. (Not for nothing are hoodies-under-blazers a semi-thing among the street style set, when the weather permits.) Visiting Amy Smilovic, the American creative director and founder of Tibi, who chose to skip a catwalk show at New York Fashion Week this season in favour of a presentation and one-on-one meetings in a showroom in Paris, it became clear that manifestations of power are up for grabs, sartorially speaking.

Wearing a camel cashmere fitted cape-cardigan (interesting tailored knitwear hybrids are very powerful in fashion circles right now), she made the point that power as an isolated trait distinct from any other characteristic now seems suspect. “Power dressing — that’s not where it’s at,” she says. “It’s more about being imaginative and flexible. Every business I can think of wants creatives at its heart now — not airy-fairy or chaotic creatives, but people who also have a grasp of tech, finance and the real world. I like to think the clothes we’re designing at Tibi now are for what I call ‘creative pragmatics’.”

At the heart of her new collection? The blazer, but not quite as you know it. The Tibi jacket has popper fastenings that mean it can be buttoned traditionally or asymmetrically (and, yes, there’s room for knits or a high-necked blouse underneath).

Smilovic is on to something with her recalibration of power clothes. As traditional institutions and powerful individuals publicly totter and fall from their pedestals, a straightforward, unreconstructed approach to power dressing doesn’t seem that relevant. Yet the jacket, in all its myriad guises, seems more relevant than ever.