The MAGA Hat Is Not A Statement Of Policy. It's An Inflammatory Declaration Of Identity

The red hat has become a symbol of us versus them, of exclusion and suspicion The bright red "Make America Great Again" baseball cap entered the popular culture as candidate Donald Trump's political swag. It has transformed into an open wound, a firestorm of hate and a marker of societal atavism.

An aesthetically benign baseball cap is a 21st-century grotesquerie.

Has there been in recent memory any other item of clothing — so specific in design and colour — that pits neighbours against one another, causes classroom altercations, sparks both rage and fear, and ultimately alludes to little more than a mirage?

Fashion has upset the populace before. Miniskirts were an affront to tradition and decorum. Baggy jeans and hoodies riled the establishment. "Black Lives Matter" T-shirts and pink pussy hats were created to send a message of political protest.

But the Make America Great Again hat is not a statement of policy. It's a declaration of identity. 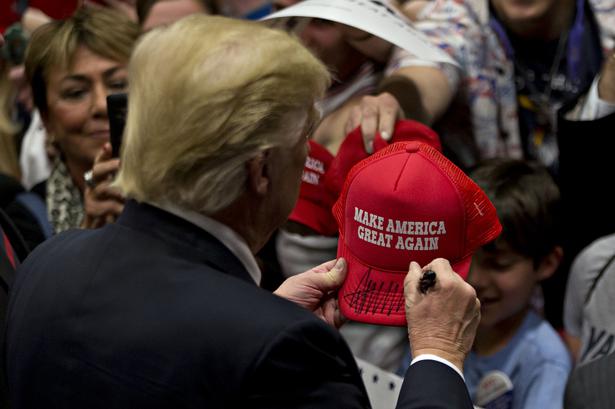 The MAGA hat. The acronym reads like a guttural cry. An angry roar. MAA-GAA! It calls out to a time — back in some sepia-tinged period — when America was greater than it is now, which for a lot of Americans means a time when the country still had a lot of work to do before it was even tolerant — let alone welcoming — of them and their kind. Some see an era of single-income families, picket fences and unlocked doors. Others see little more than the heartbreak of redlining, "walkers" and "beards," and the "problem that has no name."

The past was not greater; it is simply the past. It's only the soft-focus, judicious edit that looks so perfect and sweet.

In the beginning, the MAGA hat had multiple meanings and nuance. It could reasonably be argued that it was about foreign policy or tax cuts, social conservatism, the working class or a celebration of small-town life. But the definition has evolved. The rosy nostalgia has turned specious and rank. There's nothing banal or benign about the hat, no matter its wearer's intent. It was weaponised by the punch-throwing Trump rallygoers, the Charlottesville white supremacists, Trump's nomination of Supreme Court Justice Brett Kavanaugh, Kanye West and proponents of the wall, the wall, the wall.

The hat has become a symbol of us versus them, of exclusion and suspicion, of garrulous narcissism, of white male privilege, of violence and hate. For minorities and the disenfranchised, it can spark a kind of gut-level disgust that brings ancestral ghosts to the fore. And here, in 2019, their painful past is present.

The MAGA hat speaks to America's greatness with lies of omission and contortion. To wear a MAGA hat is to wrap oneself in a Confederate flag. The look may be more modern and the fit more precise, but it's just as woeful and ugly.

To wear the hat is to take on history and divisiveness. Because whatever personal meaning might be attached to the hat, the new broader cultural meaning overrides. It is too late to save the hat from this fate. And it's too soon to try to reclaim it and give it new life. 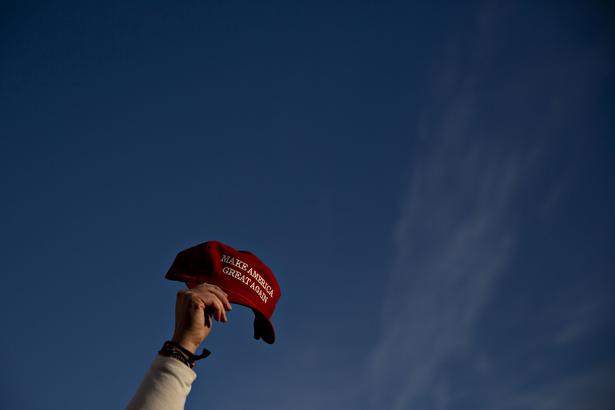 An attendee holds a "Make America Great Again" hat at the start of a campaign rally with President Donald Trump and Leah Vukmir on Oct. 24, 2018. Photo / Daniel Acker — Bloomberg

The hat figured prominently in the viral video of young Nick Sandmann's eye-to-eye encounter with the Native American elder, Nathan Phillips, at the Lincoln Memorial. Sandmann stood his ground. He had every right to remain there, the high schooler said during an interview on Today. Sandmann did not seem to consider whether it was actually the right thing to do.

How drastically his appearance changed from the fateful moment on the Mall to his appearance on television. The world met Sandmann when he was wearing a red MAGA hat and a quilted parka. His mouth was turned up in a thin, wide smile that occasionally expanded into a toothy one. When he appeared on television to defend himself against accusations of racism and disrespect, he wore a heather grey zip-front pullover and a button-down shirt. His short brown hair was shiny. His large eyes rarely blinked. His voice was flat. The MAGA hat was gone.

Journalist Savannah Guthrie asked him whether he thought the public outrage over his behaviour might have been different were it not for the hat. "That's possible," Sandmann said, which was his most self-aware utterance of the interview.

Last year, Kanye West knew that he was tossing a hand grenade into the social media universe when he tweeted a photograph of himself wearing a MAGA hat. It was a contrarian moment, an attempt to get a rise out of people — and, of course, he did.

The hat is a provocation. Is its corrosiveness too much for high school students to understand? No. They have studied American history. They can sort through complex issues related to the Second Amendment, climate change and abortion to not only have an opinion but also organise to change the opinion of others. They are digital natives who understand the power of images. Armed with so much knowledge, it is, perhaps, a more jolting loss, a graver reality, when youth is wrecked by the acid hatred symbolised by a hat.

To deny the hat's message is to be in denial — not about a misunderstanding or an unfortunate incident, but a familiar, festering truth.