The old ones are so familiar that they are virtually cliches: rebellious rich girls on the Upper East Side, sun-kissed beachcombers in Malibu, flaxen-haired princesses strolling through English gardens. The new stories, told by a new generation of designers, bring to life 1970s Harlem block parties where Aretha rocked steady from the speakers and glammed-out brown folks revelled in the spirit of neighbourliness and cool.

READ: Brandon Maxwell's NYFW Show Is A Reminder Of How Fun Fashion Can Be

Designers are shining a light on the slighted chapters of African American history. And they are sharing personal narratives about immigrants — the strivers who become America's entrepreneurs and idealists, revolutionaries and stalwarts.

Fashion is telling these stories now because fresh voices have taken center stage and stepped up to the microphone to fearlessly express who they are. Instead of trying to smooth out their individual geometry, they know there's value and power in their sharp angles and curves. In a single Sunday evening during Fashion Week, the industry offered a history lesson, a political rallying cry and an ode to joy.

Shall we begin with the joy? On a street behind Harlem's Apollo Theater, a gas-guzzling old convertible slowed from a crawl to a stop in front of a tableau of brownstones and stoops populated by street musicians. It was a Tommy Hilfiger presentation as envisioned by entertainer Zendaya and her longtime stylist Law Roach.

The Tommy Hilfiger x Zendaya clothes were fun and easy — all 1970s-inspired tweeds and faux furs, knit dresses and jaunty hats. The men wore reptile-print suits and old-school church shoes — not sneakers. The women strutted and danced as their dresses billowed in the evening air and paillettes twinkled in the spotlights. Team Hilfiger showed the collection in-season, which means there's no wait on these fall clothes. This was not a presentation for the industry but one that was live-streamed to the public — a big, open embrace of black history as popular culture. In the Flatbush neighborhood of Brooklyn, at the historic Kings Theatre, Pyer Moss designer Kerby Jean-Raymond unveiled the final collection in his ambitious trilogy "American, Also." The first part paid homage to black cowboys; the second celebrated the everyday lives of black Americans — lives that have been under assault as people sit in a Starbucks or picnic or nap in a student lounge. The final chapter, subtitled "Sister," focuses on the contribution of Sister Rosetta Tharpe, a black woman whose pairing of gospel music with the electric guitar in the 1930s and '40s was a precursor to rock 'n' roll.

Jean-Raymond is one of the few American designers willing to weave issues of social justice into his work. His consideration of subjects such as police violence is not an addendum to his craft; it's essential to it. The clothes and the runway production work in concert to weave a narrative. And one of the most powerful tools in his creative arsenal has been music. This time, more than 70 men and women dressed in black stood on the theater's proscenium stage as they stirred the audience with soul, rhythm and blues, rap, and gospel — their powerful voices making the theater, filled to capacity, quake as if it were Easter Sunday.

Where there is a choir, there's also a preacher — this time in the form of author Casey Gerald. Before a single model stepped on the catwalk, Gerald gave the audience a TED talk on what it means to be free: It is a mental state as assuredly as a physical one. "We ain't never going to be slaves in body or in mind no more," he said in his soothing alto. "Four hundred years have passed. They've been whipping us and lynching us and jailing us and shooting us down in the street, in the grocery store and in our own backyard. They've hurt us so bad. We have come tonight to say, 'You can't hurt us no more,' " he continued as the audience applauded with approval. "They been telling us all the cowboys were John Wayne white, they been telling us all our families were cracked up and cracked out. They've even been telling us they invented rock 'n' roll. We know the truth. . . . We got our story now. We tell our story now."

The models emerged to walk the runway and to correct history. There were lanky dark-skinned men in square-shoulder jackets that recalled the coordinated styles of the Temptations; bold prints based on the paintings of Richard Phillips, who was recently exonerated after spending 45 years in prison; long, sweeping coats that mimicked gospel choir robes; and dramatically draped dresses with all of the drama of Ebony Fashion Fair.

To challenge both accepted history and popular media in a 3,000-seat theater in front of an audience that included the public as well as editors and retailers is a lot to ask of clothes alone. From the music to the prose, Jean-Raymond gave his audience a symphony of grounding bass and emotional grace notes. Still, Jean-Raymond has chosen fashion as his home — this is Fashion Week, after all — and so the clothes should provide the primary melody. 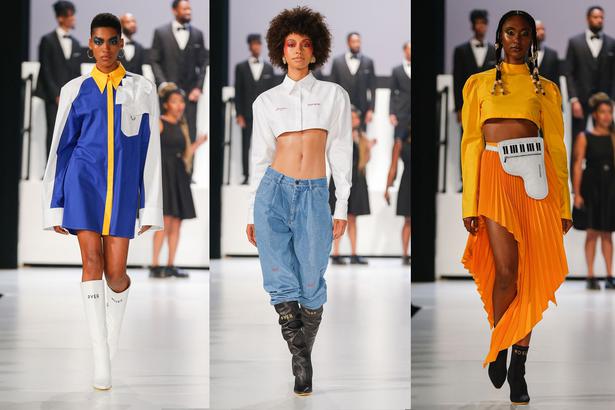 There were moments when that was true. A white circle skirt, with its layers of swirling petals, was as evocative as a cleansing sigh. A pair of glorious fuchsia trousers called to mind the flamboyance of Little Richard. But the references to piano keys and guitars on jackets and shirts was too easy, too simplistic for a sophisticated production that moved so effortlessly from past to present, pain to hope, confidence to pure swagger. The Pyer Moss story packs a wallop. But the clothes — all the clothes — need to be able to solo.

In telling their stories, designers like Jean-Raymond — and stylists like Roach — are not stepping into the spotlight alone. They are bringing along a team of people, of allies. They're underscoring that they are part of a multitude. They are expanding the American fashion industry and, in turn, challenging the American narrative.

READ: The Rise & Fall Of One Of America's Greatest Fashion Designers

In celebrating his business's 10th anniversary, designer Prabal Gurung explicitly focused on the question of who has authorship of the American story. "Who gets to be American?" It's a question that nags at Gurung, who was born in Singapore and grew up in Nepal before immigrating to the United States. He still remembers being in a meeting years ago and discussing ways of representing an American aesthetic when one of the businessmen in the room observed that Gurung didn't "look American." Gurung knew what he was implying. The designer was an American citizen who produced much of his collection in the United States, but he didn't look like the default version of an American: white.

For his spring-summer 2020 collection, Gurung wanted to expand the recipe for what was included in the American ideal at a time when white nationalism and anti-immigrant sentiment are making headlines, along with attacks on women's rights.

"In order to have a conversation, I think you need to not always be on the defensive side and reach across the aisle," Gurung said in an interview before his show. "We have a major platform and audience. We should be speaking up. I make women's clothes. The current government is attacking women's issues. And I can't be profiting off you guys and not be speaking up."

Gurung's collection riffed on the classic American uniform of jeans and white T-shirts, played with hippie tie-dye, and took inspiration from the extravagant evening wear of American couturier Charles James. And in a finale that took a cue from the American tradition of pageantry, each model — male and female, different races and ethnicities — wore a sash asking, "Who gets to be American?"

The best response may well be: Why is that even a question?