You sense it when the first model walks out on the runway. You can smell it. That first look is supposed to the opening salvo - the look that sets the tone, that defines expectations. Like the first paragraph in a novel, the few lines that make you want to turn the page and see what's next.

So when the first model appeared on the Lanvin runway - the debut presentation of Olivier Lapidus after a rapid few seasons of turnover at the helm since the shocking dismissal of Alber Elbaz, the designer who rejuvenated the dusty legacy brand - her look was a warning sign that what was going to follow was probably not going to be good.

In fact, it was awful.

It wasn't surprising or delightful or even wildly bewildering. But it wasn't the sort of collection that explodes catastrophically, like a fireworks display that flares out of control, because there wasn't even any fire. There was no passion. Only a sad, little black dress.

Most woman appreciate the necessity of little black dresses. They are versatile and safe. Done well, they can be chic. They can make a woman feel like a gamine - like Holly Golightly, straight from "Breakfast at Tiffany." With the right mix of accessories, a little black dress can be as versatile as a man's dark suit.

But done wrong, a little black dress is a bore. It is a sign of surrender. A shrug.

That first black dress was followed by another. Soon came an ensemble consisting of a black bra and some bits of black fabric draped from it and falling along the body in a manner that made the model look as though she had a spare tire around her waist. A few more frocks were marched down the runway but they barely elicited a glance because there was nothing new to see.

By the time he sent out a group of dresses emblazoned with "Lanvin," one could only sigh in disbelief. Who would want to wrap themselves in a logo that now means nothing?

The walls of the small room on the second floor of the ornate Grand Palais were more interesting than what was on the runway. Hmm, is that what they call passementerie? The ceiling was fascinating. Even the floor took on a certain charm - ooh, is that parquet? All of it was more intriguing than what was happening on the catwalk, which long before the finale felt like a sporting event that had turned into a rout. Lapidus had been completely done in by the challenge of reworking a brand. All that was left was the sounding of the buzzer. Game over.

It wasn't always like this. When Elbaz arrived at the house in 2001, he imbued it with powerful and sophisticated sensuality. His vision of his customer was not of a slick and perfect woman but one whose imperfections made her beautiful, whose confidence came from her humanity.

How does bad fashion happen? Sometimes it's simply that a good idea is poorly executed. Or a designer never clarified his message, and the result is a muddle. But in this case, there is no discernible point of view. The new Lanvin looks as though it came out of a committee meeting that no one wanted to attend in the first place.

Guy Laroche and its new designer Richard René had a different problem but a similar result. René did not create a boring collection, but it was nonetheless an affront to the progress that fashion has made in respecting the diversity of women, as well as their dignity.

René was brought in to re-energise a house that has been flickering on and off for years. As it happens, Elbaz made a pit stop at this house, too. Before arriving at Lanvin, he gave Guy Laroche an insouciant charm. He made it delightful. 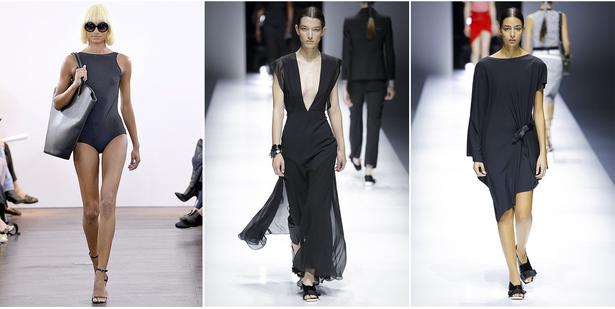 Now, Guy Laroche looks rather brutish. In the close and steamy confines of the brand's shop on rue François 1er, models walked about in a black-and-white collection of dresses with thickly applied matte sequins, asymmetrical gowns and wan jackets.

The young women were styled in matching platinum bobs whose sole purpose was to homogenise them into clones. The only thing worse than this stripping away of identity was a singular maillot that dipped so low in the back that it revealed the top half of the derrière.

Students of fashion history might recall that the late Alexander McQueen caused ripples more than a decade ago with his bumster trousers, which also showed off that part of the rear end. He argued that his intention was to elongate the torso. Perhaps René was also engaged in an intellectual exercise on proportions. But it would have been helpful to have tested his theories on some other garment, not one that is by definition little more than a swatch of fabric.

Instead, he barreled ahead with this questionable notion, sending a bewigged young woman down the runway with her butt uncovered for all to see, without her exposure enriching the fashion conversation one whit.

How did René go so wrong? By focusing on fashion as his personal expression rather than something a woman must wear. And by aiming to shock rather than engage.

Yes, it is difficult to make good fashion. It's tough to predict what will be in vogue from one season to the next. But sometimes, it seems that the most challenging part of fashion is for a designer to remember that a woman is not your muse, your problem or your ambassador. She is your client.