European designer label Van Cleef & Arpels is about to make its New Zealand debut by opening on Auckland's Queen St, along with a number of other labels.

In what appears to be a pandemic-defying move, the label founded in Paris in 1896 by Alfred Van Cleef and his father-in-law Salomon Arpels has window signage announcing its imminent New Zealand debut.

Dozens of shops on the Golden Mile have shut and Auckland Transport is severely restricting traffic there but the upmarket label has still picked 22-32 Queen St for its New Zealand entry.

A store fit-out is underway on the Queen St/Customs St corner on the ground floor of the historic place category 1 Dilworth Building opposite the Grand Mercure Auckland and H&M in the new $1 billion Commercial Bay.

Coach and Gucci will also open in Newmarket.

"We're certainly seeing a strong sense of anticipation and demand from customers to return to physical retail experiences and this will include the opportunity to visit four new luxury brands at Westfield Newmarket," Gardner said in November.

One property expert said the arrival of the London-headquartered Richemont business's Van Cleef & Arpels was significant for Auckland and that part of Queen St.

"Van Cleef & Arpels is a premium jewellery brand which has taken a long-term view on one of the most prominent corners of Queen and Custom opposite Commercial Bay," he said.

READ: The Essential Glamour Michael Kors Wants You To See

Vacancies on Queen St had created an opportunity for international brands like the new one to lease space that might not otherwise have been available, he said.

"The increase in the vacancy rate caused by the pandemic in lower Queen St area has created the opportunity for more luxury brands to enter the street than was previously possible," Male said.

"Many of the businesses which were preventing the natural lifting of the tenancy quality on the main street have been Covid-affected. That has created an opportunity for the luxury brands," he said.

Earlier this year, Bvlgari opened on Queen St and another luxury brand will go in next door to 75 Queen St, Male said, although he doesn't know who.

Van Cleef will go where Nespresso was previously, he said.

"It's a powerful mix and they're all big stores," he said of the footprints.

"The true upmarket luxury is focused on lower Queen St because of the mix of tourists who tend to be in that area as well as the workers. Van Cleef is going there because five other luxury brands are already there."

Tiffany in Britomart was some blocks away, he said. "There hasn't been a lot of activity on Queen St." 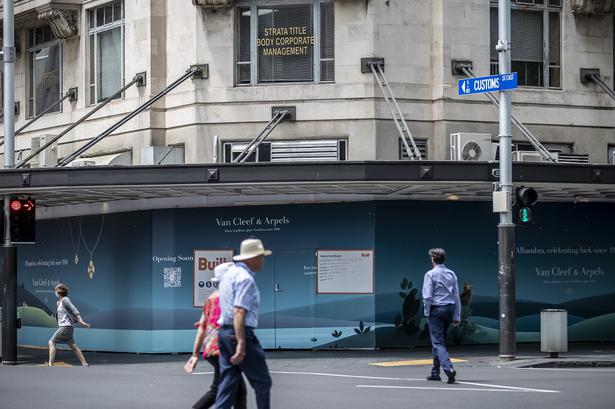 Chris Wilkinson of First Retail Group said Van Cleef's arrival would be the fifth luxury store within a few metres.

"These luxury brands play the long game and have historical experience with major impacts on their markets through events such as Sars, 9/11, etc. They are positioning for the future and that's usually reflected in very long-term leases and significant fit-out costs.

Smith & Caughey's sells Van Cleef & Arpels fragrances including a set for $315 and bottles for $240 each.

In February, the Herald reported 40 empty Queen St stores in what was once the country's busiest retail area.

Heritage NZ says the Dilworth Building was designed by Gummer and Ford "and was intended to be one of two similar structures on either side of the road, creating a gateway or 'Urbis Porta' (city gate) to the commercial district".

The Portland stone and concrete structure was developed by the Dilworth Trust from 1925 to 1927 to provide regular rental income for a school for disadvantaged boys.

The school was originally known as the Dilworth Ulster Institute and had been founded at the bequest of James Dilworth (1815-1894), an early Irish settler, to educate boys from Auckland, and Ulster in Ireland.