An Audience (of Sorts) with British Fashion's Grande Dame

It’s a pity not to interview Dame Vivienne Westwood in person. That personage, after all, is one of fashion’s most instantly recognisable. Fashion is frequently her palimpsest for ideas — both aesthetic, through the clothes she designs with her husband, Andreas Kronthaler, and political. The political notions are often evoked better through her clothes than her actual person.

Westwood’s conversation is frequently tangential, occasionally malapropistic. That’s entirely understandable. She is fiercely intelligent, her thought processes complex and multi-layered, and though her complicated clothing can often ingeniously convey those varied facets, she sometimes stumbles over the hurdle of conveying them in words.

It was a pity to miss that, but needs must. I was in New York, covering the stateside leg of the autumn/winter 2015 season, knee deep in snow and Victoria Beckham, while Westwood and her team were ensconced in her headquarters in Battersea, putting the finishing touches to the two lines she shows each womenswear season. Her Red Label, a lower-priced range that relies heavily on the designer’s archive, was shown during London Fashion Week. Gold Label has been presented during Paris fashion week since 1992.

However, although her words were conveyed via emails bouncing back and forth with her press office, I feel as though I got the measure of an exchange with Westwood. Drafts were frequently revised, original deadlines missed. 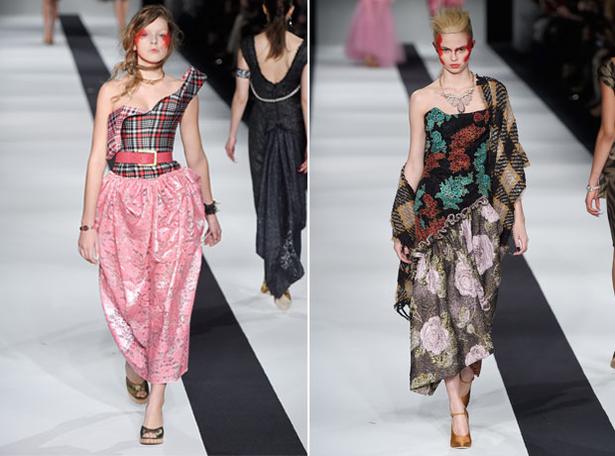 The exchange wasn’t only with Westwood, but with Kronthaler, too. He met Westwood in 1988 at the Vienna School of Applied Arts when he was 25 years her junior. “I think next year is our silver wedding and we have been working together longer than that,” says Westwood. “We met in Vienna when I was a teacher and Andreas came to do work experience.” He first collaborated with Westwood on fashion design in 1989; they married in 1993. In his words: “I stayed and never went back.”

Today, Kronthaler is the creative director of the Westwood company, working in tandem with the founder. The presumption is that he will helm the company when (and if) Westwood retires — she turns 74 in April. But Westwood has frequently worked in collaboration with other creatives. In the 70s and early 80s, she worked alongside Malcolm McLaren. The clothes they devised helped to define the punk and New Romantic movements. Westwood works best with someone to bounce ideas off.

“I love designing with Andreas. Like all the great male designers in the world, he puts women on a pedestal,” she says.

“Andreas’ ideas are so big. When I first met him as a student, the girl had to climb a step ladder to best display the dress he made.

“I helped pin down his ideas. I am an anchor. And he locked into my ideas and built them into new triumphs.”

Kronthaler agrees. “We really do work with each other’s strengths,” he says. “We can’t seem to do without each other.

It’s incredible how she’s able to come up with something that’s amazing every day. Vivienne has an original mind that keeps ticking away. We are the opposite in many ways, but opposites attract and there is a deep attraction. I just like who she is, the way she is and how she sees the world.” 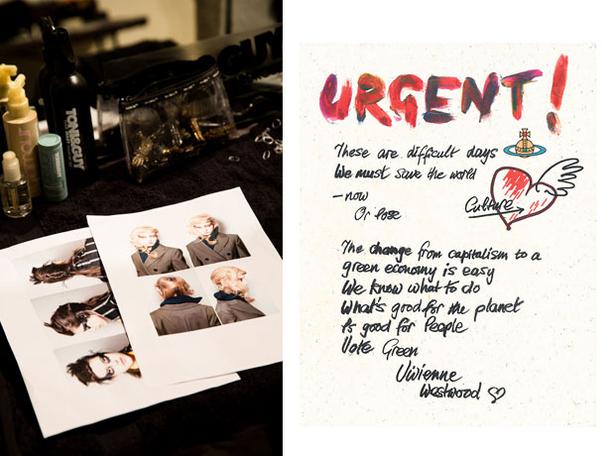 Backstage at Vivienne Westwood London Fashion Week; The invitation to the Westwood show with a poem from Vivienne. Picture / Supplied.

Westwood, her writing as engagingly off the cuff as her speech, comes in: “I think I should mention that Andreas is the one who works most closely with our team, and as we are so busy with two shows coming up. He gets interrupted and he is leaving this interview mainly to me. Otherwise he may or may not have answered more. He and I are both bossy.”

Westwood was originally a primary school teacher. There’s still a didactic sense to her clothes, the need to impart knowledge. You’re struck by that when it comes to the slogans that have been a major part of her work since punk — the word “Destroy”, for instance, writ large on a T-shirt.

Latterly, rather than inciting destruction, she’s been highlighting the environmental issues causing it. “I realise you need slogans on clothes if they are to be political and, yes, punk for me was political,” says Westwood. “The world we live in is run by death and destruction, and my idea of punk was that we didn’t need these criminal leaders. That’s why I advocated anarchy. Young punks rejected all adult values. Then I realised it wasn’t enough to pogo and spit.

“Subversion needs ideas, and ideas come from culture. Culture gives you an anchor, roots — and from that you build your vision. If we had true culture we would not be in danger from environmental collapse. Now, through graphics and slogans, I am telling young people that propaganda has replaced culture; propaganda to consume and suck up: non-stop distraction! Culture is to engage with the world and our past ... you get out what you put in.

“I’m afraid I don’t have time to continue with a full explanation. But if we don’t stop climate change we will soon have mass extinction of all life forms.”

With Westwood, it’s not the usual fashion designer discussion. If the world was going to end tomorrow, what would she like to be remembered for? “The best and most useful thing I’ve ever done is my analysis on the end of capitalism,” says Westwood. And she sends me a link to her Climate Revolution blog.

I would argue her clothes communicate those ideas far more succinctly. And, I hope, if tomorrow does mark Armageddon, she will be remembered for those.