For Alexander McQueen, the catwalk was no simple fashion parade — it was a theatrical stage for his astonishing and troubling vision

‘‘I don’t want to do a cocktail party. I’d rather people left my shows and vomited,” said Lee Alexander McQueen in 1997, in an interview he gave to Time Out. A prime example? The collection he was then about to present, for spring/summer 1998: McQueen wanted to call that show “The Golden Shower” — a reference to the sexual act of partners urinating over each other.

The sponsor, American Express, baulked at the idea. The show was instead simply called “Untitled” — although that golden shower still manifested itself in a spectacular downpour that drenched models, catwalk and audience alike. It wasn’t sexual, nor especially urolagnial; it was poetic, visually stunning. Moving. It is, possibly, better supported by the end of that McQueen quote: “I prefer extreme reactions.”

Extreme is the word for McQueen. His life was extreme — born and raised in London’s East End, the son of a taxi driver, he rose to international fashion fame, and died by his own hand five years ago. And his clothes were extreme, too.

In the early 1990s, McQueen proposed a trouser shape he ironically dubbed the “bumster”, the low-slung hipster pushed to an extreme, frotting against the pubis and leaving the cleavage of the buttocks exposed. They caused a furore when first showcased at London Fashion Week — as did his other creations, models sporting antlers, or gaffer-taped into dresses constructed from plastic found in skips.

McQueen’s early work was obsessed with the corporeal and the visceral: it found a natural counterpart in the Young British Artists movement. When McQueen designed a corset of transparent plastic trapping tapeworms against bare flesh in 1995, for instance, it looked like a Damien Hirst work.

The clothes were hardcore, but his vision reached its greatest extreme in the presentation of his collections, first in London and then in Paris.

For McQueen, the catwalk show was more than a parade of unobtainable bodies in unaffordable clothes — the status it is so often reduced to by other designers. “It was not really about showing clothes to the press, it was actually telling a story or painting a picture,” says Sarah Burton, McQueen’s right-hand woman, who took over as creative director of the label after his death in 2010. “He wanted to move people. Like he always said, whether you liked it or hated it, he really wanted you to feel something.”

For McQueen, the shows were at least as important as the clothes.

“Sometimes the [idea of the] show came and then the clothes,” says Sam Gainsbury, a creative director and producer who worked with McQueen from 1994. “It was almost hand-in-hand. He almost couldn’t visualise the clothes until he knew how they were going to be shown.”

Gainsbury was one of a close-knit coterie of collaborators: others, over the years, included the stylist Katy England, artistic directors Joseph Bennett and Simon Costin, milliner Philip Treacy, makeup artist Val Garland and hairdresser Guido Palau. McQueen’s spring/ summer 2001 show, “Voss” — at which models walked inside a padded cell, the audience peering at them through walls of one-way mirror — cost more than £70,000 to stage and involved 200 specialist technicians. 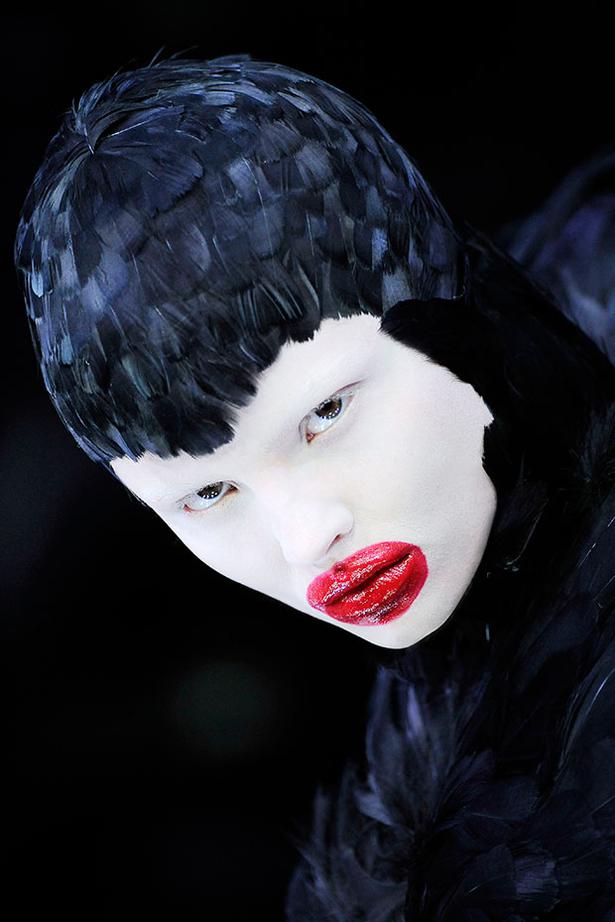 All worked tirelessly to help McQueen realise his dreams — and really, that was what his shows were about. “The thing about Lee was the pure, pure vision,” says Burton. “He didn’t give a shit about what anybody else thought or said, and when he’d come in, it’d be like he knew exactly what he wanted ... he wanted to fight for it until he got it. That’s what made those shows.”

This weekend, an exhibition on those shows opened at London’s Victoria & Albert Museum: Savage Beauty, originally staged at New York’s Metropolitan Museum of Art, is a thematic exploration of McQueen’s aesthetic obsessions.

The opening section, devoted to his early years in London, is housed in an aged, distressed area designed to mimic the derelict Gatliff Rd warehouse near Chelsea Bridge, where many of his most memorable London shows were staged.

Elsewhere, spectres of shows past haunt the present: the entrance is flanked by enormous wings, made of fluorescent tubes, which formed the backdrop to the designer’s spring/summer 2008 show; the ethereal hologram of Kate Moss that manifested itself in his autumn/winter 2006 show “The Widows of Culloden” is also on view.

The Metropolitan Museum’s staging of Savage Beauty in New York in 2011 attracted more than 650,000 visitors, while the V&A has already sold 60,000 tickets. Part of its appeal is, perhaps, a morbid curiosity that McQueen himself may have appreciated. Staging a show in Spitalfields’ Christ Church, he allotted a front-row seat to a skeleton, and one of his most recognisable motifs was the skull, printed on scarves and adorning all sorts of accessories.

However, most visitors to the exhibition will doubtless be attracted by McQueen’s renown as an exceptional designer and unparalleled fashion showman. In cyberspace, his shows still rack up millions of views on YouTube, eagerly dissected by an audience hungry for his distinctive breed of fashion as spectacle.

McQueen himself was well aware of that desire. “Usually communication is done through entertainment media like film and music,” he commented in 2010. “But fashion is part of that. If I like it or not, my shows are a form of entertainment.” His final catwalk show, “Plato’s Atlantis”, was streamed live on Showstudio.com.

Both the fashion website, and McQueen’s own, crashed under the sheer audience demand.

McQueen’s vision works remarkably well in online video form, because there was always a cinematic bent to his imagination. Following his graduation from London’s Central Saint Martins in 1992, his first collection was titled “Taxi Driver”, after the 1976 Martin Scorsese film. Later collections referenced films as varied as Picnic at Hanging Rock (1975) and The Shining (1980) . “We often used film references,” says Costin ”[because of] the impact that film imagery has.”

Theatrical is the term most frequently used to describe McQueen’s Sturm und Drang approach to showing his clothes. “Theatre’s such a funny old word,” suggests Gainsbury.

“[The shows’] absolute objective was to show Lee’s collections, but he needed to do it as a storyteller. So, just as with a play, theatre, it was the same format, the same ideas.

He involved the same people, set designers. All shows do, but it was a whole concept. It was concept-driven rather than scenically driven.”

“I think the dream for him was always the show,” says Katy England, who helped devise the look of McQueen’s early shows for his own label and the house of Givenchy (where he was head designer from 1996 until 2001). “I didn’t realise at the time, but I think he is a real artist in that he wanted a spectacle, a performance.

“He wasn’t satisfied with just sending something down the catwalk; that was nothing to him.”

There was an undeniable link to the art world in his shows — not just because he referenced specific works in his clothes (a Nick Knight floral print, for instance, was used to decorate an evening gown in his spring 2000 Givenchy haute-couture collection) and the staging of shows (like the imoth-smothered, overweight nude inspired by photographer Joel-Peter Witkin that was the centrepiece to 2001’s “Voss”).

“For me it was his use of the language of installation art and hoping the set would become something in its own right,” says Costin. “It was never decorative ... the shows were always supposed to be quite meaty, well thought-out, visual statements that would enhance the collection and the experience of the audience viewing the collection.”

The latter is an important point. Although the show, rather than the clothes, was “the dream,” as England says, it must be emphasised, unequivocally, that McQueen was able to stage such spectacular presentations only because his clothes invariably held up to the scrutiny.

He was meticulous in his craft — trained in traditional tailoring with Anderson & Sheppard on Savile Row, he also worked for the designers Koji Tatsuno and Romeo Gigli before commencing his studies and career. His bumsters weren’t just wanton provocation; they were minor technical marvels. McQueen’s tailoring know-how meant he could calculate the rise and fall of a trouser crotch; in layman’s terms, they wouldn’t end up around your ankles.

Nevertheless, there was an inherent drama in his clothing that engendered them to their extravagant presentation. Rather than using his shows to paper over the cracks of a dodgy collection, their increasing theatricality seemed to spur McQueen on creatively, to invent and experiment and push. If anything, the more elaborate the show, the better the collection.

However, there are other, more personal, interpretations of McQueen’s presentations.

“Not so much the collections, but the shows are kind of autobiographical,” the designer himself said in 2003. Take his autumn/winter 1997 show, “It’s a Jungle Out There”. McQueen said that show was about the experience of his first season designing for Givenchy — namely the resoundingly negative reaction to his debut from the industry at large.

“They have claws, they have knives, they’re throwing everything at your back,” he said of the fashion world. “It’s a Jungle Out There” equated McQueen’s savaging by the press to a Thompson gazelle being torn to shreds on the African veldt. It’s a striking comparison. “I think he wanted to make a statement,” says Burton, “about how he felt at the time and how he felt society felt at the time.”

Society has changed — and fashion has too. Despite journalists crowing and crowning various designers the “new” McQueen, in truth no one has risen to take over his mantle as fashion’s great showman.

Burton has consciously pulled away from the dramatic feats of pyrotechnics that previously characterised their Paris fashion week shows, focusing like McQueen himself on superlative craftsmanship, but presented in a quieter style. Maybe McQueen’s brand of catwalk fireworks and brimstone has simply gone out of fashion. Or maybe it’s an acknowledgement of the fact that no one, really, did spectacle as well as he.

Lee Alexander McQueen was confrontational and provocative. “He was very belligerent. If he could buck the system, he would,” remembers Costin. His fashion shows were, arguably, the best expression of that, fighting against a bland showcase of product or a pompous display of wealth, and transforming the catwalk into an art installation, a loaded political message, or indeed an autobiographical billboard.

McQueen created shows that were aggressive and poetic, horrifying and mesmerising, savage and beautiful. “It’s fearlessness, that’s the thing you can’t replicate,” says Gainsbury. “You can have the best designers in the world but if they’re fearless ... that’s the thing that separates them from everybody. I think he was fearless.”

See who was at the Savage Beauty opening party.

• Alexander McQueen: Savage Beauty is at the V&A in London until August 2.