How much gold makes an object vulgar? This is the question put to us by the first display in the Barbican’s dazzling and delightfully subversive new exhibition on the subject of the whys and wherefores of aesthetic taste, seen through the prism of fashion.

The visitor is confronted by two items made out of gold thread. One is a fragment of a late medieval chasuble — a liturgical cloak — the other is a dress from 1937 designed by Elsa Schiaparelli. The chasuble strikes one as gorgeous and “objectively” beautiful. The Schiaparelli is, well, a bit disgusting, though brilliant too, literally, for its brashness, its ostentation and its sheer vulgarity. There’s definitely too much gold here, and doesn’t it look great!

And so the themes of the show are introduced: something that’s vulgar in one context is good taste in another. Taste is such a mutating thing that it is a meaningless notion if you try to fix and define it. Its fluidity is its very essence. All this neurotic differentiation has “reality” only in our own minds: because, after all, vulgarity is a crime only ever committed by other people.

The exhibition’s curator, Judith Clark, has invited a psychoanalyst, Adam Phillips, to give multiple definitions of the vulgar. His clever, aphoristic notes explain how the vulgar can take in the common, the excessive, the overtly sexy and so on. His categories provide the excuse to juxtapose scores of examples of some of the most sumptuous couture of the past 80 or so years, with historic items.

Thus in a section called Showing Off, the gallery’s centrepiece, the items include an 18th-century court mantua dress — an outfit so pompous that it’s as wide as it is high — as well as a 2005 John Galliano for Christian Dior dress.

This latter mashes together echoes of the mantua with empire line, then adds flowers made of feathers, and is topped with a hat that looks like it’s made out of a white patent-leather handbag stuck on a cloud.
It is, believe it or not, one of the less ostentatious-looking gowns in the room.

Of course, all the recent couture is able to sidestep the accusation of actually being vulgar (just imagine the nightmare Clark might have had otherwise: “Mr Lacroix, would you like to lend your vast velvet, silk and gold dress to my exhibition on terrible taste?”) because it is knowing. 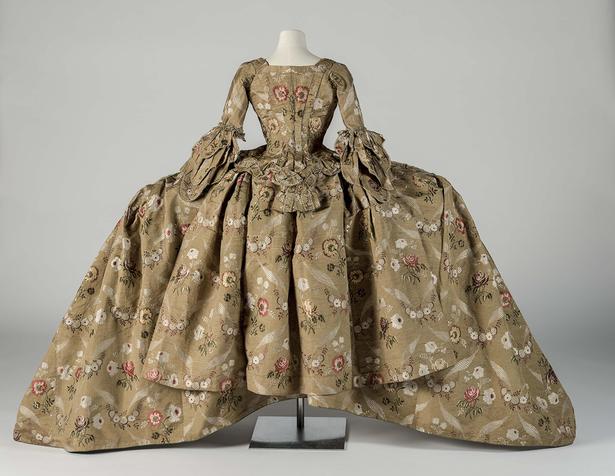 Even so, I was at first surprised that the divinely simple, Grecian-style dresses by Madame Gres from the 1970s had been included. Clark explained that the neo-classical, which these garments explicitly are, can be seen as vulgar. The definitions of the vulgar are admittedly rather elastic. Is the exhibition having its cake and eating it? Probably, yes. But who cares when everything in it is so delicious, and the relentless probing of the hypocrisies of taste nudge at something deeper about how mankind sees itself?

Upstairs, there’s a room called Puritan, which is full of lace. There are two recent outfits to give post-modern context, one quite obviously a riff on a Puritan dress, and then there is a series of breathtakingly intricate lace collars from the 18th and 19th centuries. These were created as symbols of purity to adorn very plain black clothing. Yet at what point do these become self-conscious display? Surely purity is not something to be put on show, it is in its essence demurring, uncorrupted? You can indeed, extraordinarily, build an argument that these indubitable works of art were, in their context, vulgar.

The truth is that some of the abstract qualities we most like to admire — goodness, humility, modesty — are not well suited to direct visual expression. It is their darker shadows that are a whole lot easier to put into material form: the naughty, the exhibitionist, the sexy.

And then we’re right back, plonk, in the land of the vulgar. But as the milliner Stephen Jones points out in an accompanying video to this show: “What we must never forget is that the vulgar is tremendous fun”.
— The Daily Telegraph

Be inspired by these quotes about original style