You’ve probably endured manspreading — now, thanks to this season’s big dress trend, it’s time to take up space of your own, says Marisa Meltzer In 2016, which feels like such a very long time ago, trouser suits were what powerful women wore to be taken seriously. Now, in 2019, women who want to be noticed are no longer putting on a blazer or a smart sheath, or even a sexy slip of a dress. We have instead turned to the clothes equivalent of shouting: the big dress.

There’s a long history of men taking up space, whether that’s in politics or on your commute. To fight the patriarchy in 2019, a big, voluminous number that forces you to reclaim your own space is powerful. It’s large, it’s colourful, it’s comfortable and it’s commanding — threatening, even, when we wear it. This is the fashion version of womanspreading.

The big dress comes with its own vibe — call it big dress energy — that makes you seem like you just don’t care. You’re Rihanna (who never met a big dress she didn’t love) in a Molly Goddard gown made entirely of blue tulle. (By the way, she paired it with white trainers.) This is not a look for wallflowers. Your female friends will love it, gay men will nod in approval and straight men will give you a wide berth. I’ll be frank: most men will hate it. But that’s not the point! A big dress is dressing for the female gaze.

A post shared by Gwendoline Christie (@gwendolineuniverse) on Feb 8, 2019 at 7:38pm PST

Plus, they make you look fun, like you’re in on the joke. Perhaps that’s why designers are so enamoured of them this season. Japanese costume designer Tomo Koizumi’s debut collection was a sea of polyester organza — up to 200 metres for one of the pieces — that made the models look a bit like rainbow sea urchins. The showstopper was the actress Gwendoline Christie in pink flared trousers and platform shoes, her limbs entirely obscured by mounds of fabric.

She looked a little like a psychedelic vagina, but she also looked completely cool and in control. If a woman walked into a party wearing that, I would make a beeline for her.

Scandinavian designer Cecilie Bahnsen’s cloudlike dresses are street-style bait for making their wearers look at once angelic and absurd. Simone Rocha and Marc Jacobs showed frothy and poufy ones, as did Richard Quinn, Roksanda, Mary Katrantzou and Rodarte. 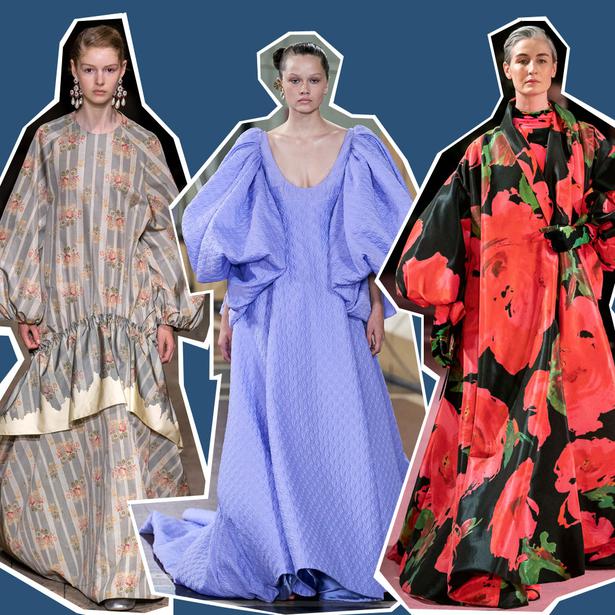 Molly Goddard’s signature pink tulle dress, of course, started the trend when it was worn by the Killing Eve antagonist Villanelle — and then featured on every Instagram feed for most of 2018. Who better to exude big dress energy than a psychotic bisexual assassin who loves fashion and Sandra Oh?

No one would dare to call the big dress a frock. She isn’t cute but, rather, demands to be seen and so is the perfect uniform for post-Time’s Up Hollywood. Sure, for the 2018 awards season actresses banded together to shroud themselves in black to make their message of equality heard. Then, before the next season came around, they started using their gowns as their megaphones.

Think of Gemma Chan in a fuchsia dress that looked like a high-necked parachute at this year’s Oscars, or Lady Gaga in blue Valentino, her hair dyed to match, at the Golden Globes, or in a powder-pink feathered gown, again by Valentino, at last year’s Venice International Film Festival. Or think of Jennifer Lopez swathed in pink on the Second Act red carpet, Maya Rudolph in a big print number for the Wine Country premiere, and Lena Dunham in flame colours and feathers at the Once Upon a Time in Hollywood one.

The reigning queen of the big dress is Tracee Ellis Ross, who said she felt “joyful AF” in her hot pink taffeta plisse Valentino Haute Couture gown. Her stylist, the ardent feminist Karla Welch, is known for her love of the big dress and has put Ross in Marc Jacobs, Simone Rocha and Comme des Garcons. (Welch recently shared a photo of herself on the way to a birthday party for Busy Philipps wearing a huge lilac number by the Row.)

A few daringly dressed men have got in on the act, too. Who could forget Ezra Miller in a black Moncler Pierpaolo Piccioli sleeping-bag gown at the Fantastic Beasts premiere last winter? Pose’s Billy Porter has made the big dress his own expression of success and queer visibility — in a black tuxedo gown at the Oscars and in a pink and red evening suit with a tulle train at the Tony Awards.

The modern big dress recalls distant cousins, such as the sumptuous fabrics of the Renaissance, the pomp of clothes worn in the royal courts of the 18th century, the vast hoop skirts of the Victorians, and the power gowns of socialites in the 1980s. Truman Capote would have loved a big dress on one of his well-bred Swans.

But the contemporary twist is that today’s big dress isn’t restrictive. There might be parts that are fitted — a bodice, say — but movement and drama are key. And the less typically sexy the big dress, the more effective. It’s about putting on display not one’s assets, but one’s personality. In that sense it’s sexier than any skin-tight bandage dress or body-revealing gown could be.

We live in an era that often seems free of practical reason, with leaders who are not always the people we want to set the tone, sartorially or politically, for our lives. In 2019 we women have to ask ourselves the big questions of how we want to be seen. How do you show power? Maybe not by fitting in, but by claiming it. And in the era of #MeToo, for whom do you dress?

Big dress energy is about delighting in being a complicated grown-up woman who defies category. Why do you have to be a good girl and choose between volume or colour or silhouette? The big dress says — no, shouts — that you can have it all.

How To Wear This Season's Bold Hues With Crisp Neutrals

Add a pop of colour to your palette with these bright wardrobe additions. Pair with quietly chic neutral pieces for a refreshin...