If you believe in food as a connector, a creative outlet and a comfort during rough times, Sarah Tuck’s new book Coming Unstuck will speak to you. The first title from the Stuck in the Kitchen blogger, it’s both a recipe book and a roadmap through one of the toughest times in her life, with pages of honest words and recipes for every mood.

There’s everything from "sad-arse dinners for one" to canapes and elaborate desserts for the next party you throw, as well as basic dips, spreads and classic cocktails (that err on the strong side). Grab this book and keep it close — these are recipes you’ll keep coming back to.

We asked Sarah a few questions about the writing process, being honest about being in a tough spot and how food can help your heart to heal.

As someone who’s self-taught, what are some of the biggest learning curves that helped you to bring your photography, recipes and styling to such a high standard?

In terms of the photography I guess it was a combination of three things: The first is that I did a part-time course at AUT to get the fundamentals of photography nailed. Then I trawled the internet looking at food pictures trying to identify what I liked and didn't, and what really worked. From there it was just a matter of practising like crazy. For me it certainly wasn’t instant — it takes time to get it right.

With the recipe writing I learned a lot while working for Annabel Langbein and basically have always tried to stick to the essential principles like listing ingredients in order of use. The styling is so important to me — for quite a while I tried so hard to learn from what others were doing, that I was actually cramping my own style. It was only when I finally went, 'you know what, stuff it, this is how I do it', and really owned it, that it came together properly!

How would you sum up your approach to recipe writing?

Basically the recipe is critical — I always say if you get a bad result, and have followed the recipe exactly, it is not your fault but the recipe's... So, no pressure then! I always have a couple of good friends in mind when I’m writing the recipes, and I try to add in little hints that I know I would say naturally to them if I was explaining it in person. Also, I am not a lazy person at all, but when it comes to cooking I want good bang for my buck — I aim to keep the recipes as simple as I can, focussing on great taste and texture, and as often as possible, food that looks really enticing too.

Who is Coming Unstuck aimed at?

Basically anybody and everybody: I figure that if I cook for my 20 and 22-year-old sons and they and their friends like my food, as does my dad who is in his late 70s, then the recipes should also have a pretty broad appeal. Having said that, I think it will specifically appeal to people who are either going through or have been through a tough time, and to be honest, I really think that is everybody at some stage. I hope too that it will be good for people who need a bit of confidence in the kitchen — that they will be able to see you can make something that looks really kick-arse without it having to be too complicated.

Between recipes, the book contains a lot of honesty — was it a challenge to open up about the situation that spurred you to write it?

Surprisingly no, that aspect of the book is so fundamental to it and a big part of the reason I wanted to write it at all. The thing is people who know me will probably have always rightly assumed I'm a reasonably self-assured, level-headed, competent person, and yet I came unstuck spectacularly after my husband left. I felt so useless and unwanted — so in the book I wanted to connect with others who might be feeling the same way, and reassure them, that as far as I could tell, it was normal. I also wanted to talk about the fact that it takes time to heal and move on — it’s not some five-minute, positive thinking exercise and away you go. More like months of heartache, followed by highs and lows, with the highs, thankfully, increasing in regularity.

And it’s beautifully designed — by your son. What was it like to work with him on this?
It was such a treat! Henry (Pog) is so incredibly talented, and knows me and my style so well that I knew I was in the perfect safe hands. He is even more of a perfectionist than I am, so I never doubted the result. I will always be grateful to have worked with him like this, and I know his design skill is a huge part of what makes the book work.

What’s your advice to incorporating food into the healing process, or even as a pick-me-up, without going completely overboard?

Hmm, the thing is think it is recognising what you need, and responding to it. If you are feeling that food is just too much hard work, something easy and gentle like perfect scrambled eggs or evening-after-the-night-before soup might be as much as you can handle. But if you're starting to come right, you might want to treat yourself with a bacon and gruyere tart or something more indulgent. I guess it is also really important, once you make it through the first little while, to realise you need to give yourself a bit of love through food — it mirrors the recognition that you are worth loving and looking after.

What’s the most comforting recipe in the book?

Woah, that’s so difficult! For me, it is the perfect scrambled eggs because it is associated with the memory of my mother making them for me when I was a little girl, but for someone else it might be something else that resonates with them.

You seem to be always working hard towards something — now the book is out, do you have a new goal in mind?

Oh my god I have no idea! I am just so excited to get the book out there, keep on top of my regular work and take a breather. I always have 100 plans, I just need to work out which one is the right one to go with. Can I say watch this space? 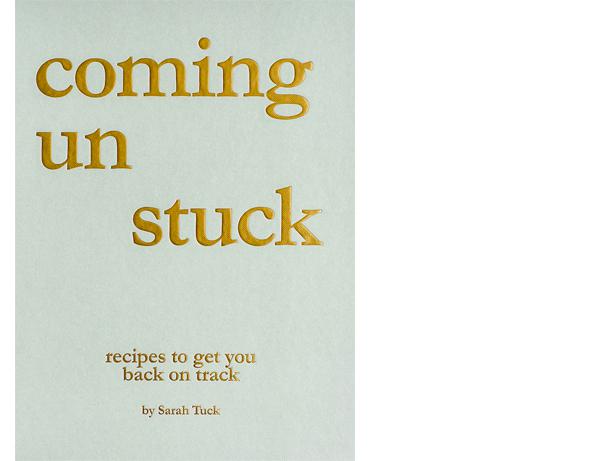 The Stuck in the Kitchen blogger shares a delicious recipe from her new book, Coming Unstuck

Kitchen Tips That Will Change How You Eat

As experts insist cheese must be kept in the salad drawer, Felicity Cloake breaks a few food taboos