A few weeks before the second Auckland lockdown, I got a tip that a little takeaway in Epsom was serving authentic Thai dishes unlike anything you'd find in the city. Packed with flavours, no skimping on herbs and spices and prepared with either raw seafood or offal, these dishes are only widely eaten across Asia.

Evidence they exist here can be found in Facebook posts from some members of the local Thai community — but they were nowhere to be found on the menu when I arrived at Wok This Way on Manukau Rd, which listed just the usual pad thai, tom yum and green curry.

Armed with screenshots of duck blood noodles and spicy raw crab salad I asked owner Laphatrada Mongkolthong, who also goes by her nickname Peach, if these were their dishes.

Then comes the revelation, the restaurant has a secret menu of sorts — written in Thai script, with an offering of 23 dishes. I navigated the menu using a translation app on my cellphone and found chicken feet mini pot stew, deep-fried crispy pork intestines, a selection of raw seafood salad options and the duck blood noodle soup.

Secret menus are not an urban legend in Auckland, and it's been my interest to uncover them. I am not a food writer, nor do I have a food blog — and unless you're also a friend on Facebook, you will probably only read about my food exploits here in Viva.

My day job is as a senior New Zealand Herald journalist overseeing the diversity rounds, but my hobby is eating. I love food and have discovered over the years that in this city, which has been home to me for more than 20 years now, the best gastronomic offerings are often hidden from sight.

Ethnic restaurants here try to satisfy two sets of tastes, according to the Restaurant Association — which is calling for more inclusive menus so people can fully experience and enjoy everything that this delicious city has to offer.

But until that happens, here's my guide to some of the weird and wonderful dishes around Auckland — which, for the adventurous eater who's willing to venture beyond the tried and tested, is one of the best food cities in the world.

Bucket fish is one of my favourite dishes. It's one of two dishes I nominated for Ateed's Iconic Auckland Eats initiative, which collates 100 memorable restaurant dishes as nominated by well-known Aucklanders. Bucket fish is theatre at the table. When ordered, the chef comes out, pours the boiling fish broth into the bucket and slices up a blue cod which is then added in. The bucket is then covered with a lid, trapping the heat and in a few minutes, the fish is cooked and ready to eat. The restaurant claims the river stones contain elements that cleanse the body and the cedar from the bucket helps to cure fatigue and relieve stress. If spice is not your thing, request less green pepper. Truly flavoursome, entertaining and if the claims about the health element is true, then I see that as a bonus. 152 Great South Rd, Epsom 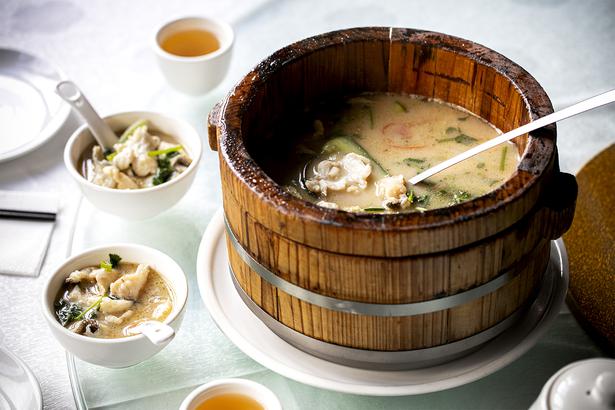 Nem's scallops in spicy sauce, grilled with mayo, onions and chilli powder in special Vietnamese seasoning and topped with flying fish roe is one of the restaurant's special dishes served only to select diners. The other dish is the halibut in mango sauce. One diner, who tried to order the dishes using photos of the dishes that had been shared in a WhatsApp foodie group, was told these were only prepared for restaurant regulars and special customers. But if asked nicely, I'm sure Nem owner Rachel Nguyen will let you have them. 311 Parnell Rd, Parnell Guaytiew Ped, or duck noodles, is served with a combination of sliced duck meat, meat balls and duck blood if ordered from the Thai menu. The crab salad or Yum Poo Ma is a popular Thai spicy salad where the hero of the dish is raw swimming crabs. Another famous Thai street food on the menu is Super Tin Kai or spicy chicken feet soup served in a mini hot pot. Ask for the Thai menu and make sure you have a translation app on your cellphone. 149 Manukau Rd, Epsom

Mention spring pancake on Dominion Rd, and the more popular Wang Wang comes to mind. Few know of the existence of Da Di — which is on the second floor above Jimijimi Chicken — and doesn't even have signage in English. The dishes are pretty average, but the freshly made spring pancake skins are a different story altogether. Choose from pumpkin, kumara or spinach pancakes to make your own spring rolls. It goes best with sweet and sour shredded potato, cumin lamb and shredded pork with spicy sauce as fillings. Eating spring rolls is believed to bring good luck after winter. Level 2, 660 Dominion Rd, Mt Eden 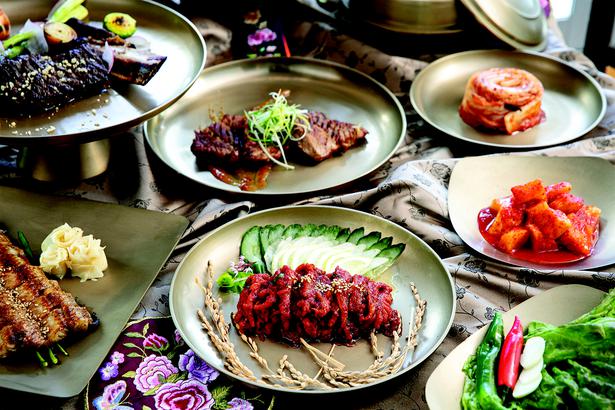 This little Korean restaurant on the North Shore is run by a Korean grandmother who was a disciple of a professor of Korean food at the Institution of Korean Traditional Food in Seoul. Anna Jin Kyung Youn claims her dishes are prepared from secret recipes passed down for generations in her family. Although popular for its barbecue and stews, one of the special dishes there is the hongeo muchim, or spicy fermented skate. Skate is a cartilaginous fish, and this dish is considered to be a delicacy by Koreans. Few restaurants serve this as its preparation is time-consuming and complex. 9/20 Link Drive, Wairau Valley

Yu Tiao or Chinese fried dough fritter from Silverlake Takeaway
Not all doughnuts are round with a hole. The Chinese ones — yu tiao — are translated as doughnut sticks. The chewy, light fritters are one of the most popular breakfast items in China and some parts of Southeast Asia. At this unassuming little takeaway shop, with just three tables, people queue and buy warm, freshly fried yu tiao for breakfast. Also available at Silverlake are century egg congee and soya bean milk to accompany the yu tiao meal. For many in the local Chinese and Southeast Asian communities, this is a breakfast staple. You have to be early because the yu tiao are often sold out and gone by lunchtime. 215 Sandringham Rd, Sandringham

You probably know what Malaysian roti canai is, and roti tissue is a paper thin variety that is often enjoyed as a dessert. In Malaysia and Singapore, roti tissue is a mamak street-stall staple, usually eaten by breaking small bits of the pastry with your hands, and taken with teh tarik or pulled milk tea. At Mamak Takapuna, the dough is stretched thin and pan-fried. It is then rolled up into the shape of a large cone, coated with sugar and served with condensed milk. The restaurant also serves another roti dessert variation called roti bomb, which is smaller and thicker and is wound into a spiral and served with icecream. 6 Huron St, Takapuna 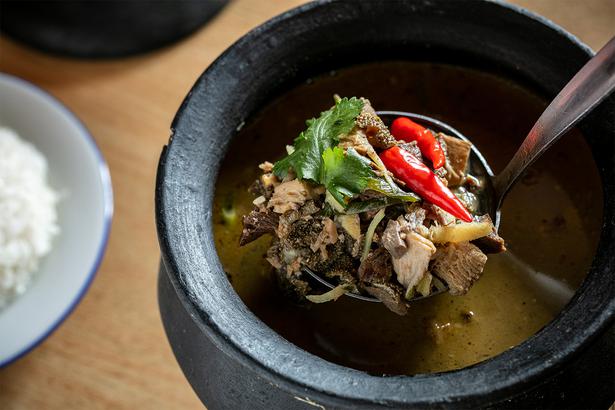 So secret is this dish, there is no mention about what its main ingredients are. It's described on the menu as a "legendary Filipino soup famous for energising qualities". The truth is, Soup Number 5 is made from bulls' testes and penis, and many Filipino men swear by its aphrodisiac properties. The animal parts are chopped into tiny bits, so for the ignorant, they probably won't even know they're eating a bull's genitals. The broth is rich, full of beef flavour, and hearty. 124 Customs St West, central city

The owner of this modern Chinese skewer restaurant, Paul Wong, describes the spicy chicken wings dish as "an experiment that worked". Over the first lockdown, he wanted a dish that looked authentically Sichuan and fiery hot, and yet palatable to all. So he got the chefs to fry seasoned chicken wings among mild dried chillies with spring onions, spices, peanuts and thinly sliced potatoes. The result, a chicken dish that easily trumps KFC. The dried chilli are so crispy and mild, they can be eaten like chips. The only warning I have is that Mr Hao's spicy chicken wings can be really addictive — and I've been back many times to satisfy my craving. 365 Dominion Rd, Mt Eden 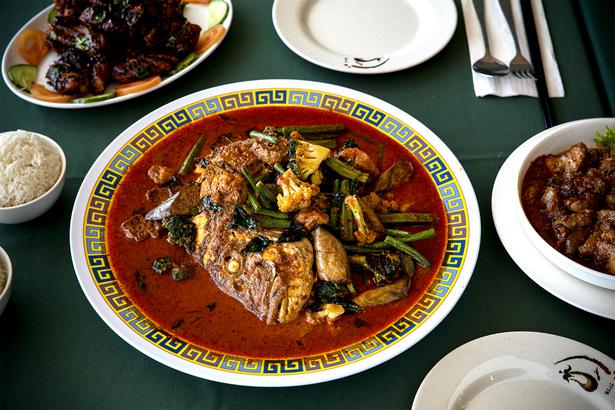 There are restaurants that serve curries, and there's this restaurant that serves Nyonya fish head curry. This is a dish that's close to my heart and a reminder of home. Its origins go back to an Indian chef in Singapore who wanted his South Indian-style food to cater to Chinese customers and started using fish head because it's considered a delicacy by his targeted clientele. The Nyonya version is spicy, sour and fiery and really packs a punch. Bunga Raya is a great little Malaysian restaurant for many other dishes, including its XO squid and ayam kapitan curry (which is also a special that's not on the main menu), but the fish head curry is most definitely my star dish. 2a/3062 Great North Rd, New Lynn

There are a handful of places that serve silkworm pupae stew in Auckland, and one of them is Friends Korean Restaurant in Albany. It is a dish only for the brave diner, I would say. It is an acquired taste, extremely pungent and the silkworms are crunchy but squirt when you bite down. Korean locals pair the stew with soju, which I guess is needed to wash down the aftertaste. The boiled larvae are served in a stone pot with chilli peppers and spring onions. 243 Rosedale Rd, Albany 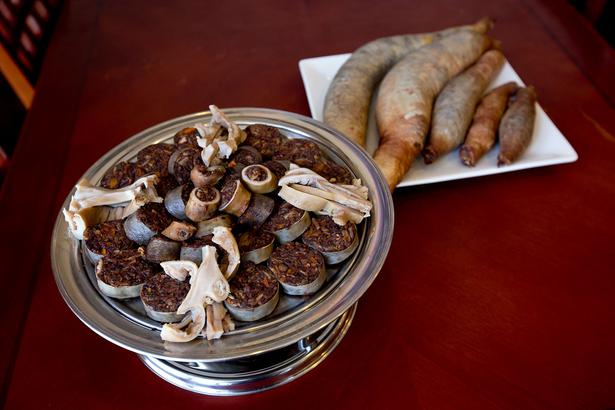 Not a sausage that would win awards, but it is the top sausage for many in the Korean community. The word "abai" loosely translates as "father" and abai sun dae — blood sausage — is a popular street dish in both North and South Korea. It's not common in New Zealand but Koreans visiting Auckland from other parts of the country are known to buy these sausages from Tulbo Ne in bulk and freeze them for later consumption. Ground meat and vegetables, along with dangmyeon noodles, are stuffed into pig intestines which act as the sausage casing. Another variety, using normal sausage casing, is used in a dish called sundaeguk, where the blood sausage is boiled in soup with offals such as pig's stomach, ears and liver. 243 Rosedale Rd, Albany