The Taste Test: In Search Of Auckland's Best Toasted Sandwich

Are these widely lauded toasted sandwiches actually good? Greg Bruce tucks into some of the best toasties in town and gives his honest opinion Bestie, 183 Karangahape Rd
The filling: Towpath cheese toastie with pickle, $16.50
The verdict: Alongside the sandwich came a deconstructed condimental work of such care and complexity, laid out with such architectural sophistication and obvious sexual allusiveness, I was both shocked and moved. The condiments were pickle, pepper, onion, mustard, brassica leaf, radish and a pale red quince jelly. When I added a random selection to my toasted sandwich, it transformed from a gustatory object to spiritual being, and I went with it.

The problem, I suspect, is I attended a high school famed as a disciplinary powerhouse - a place where my craving for structure and order developed contemporaneously with the quashing of my creative impulses. What I'm saying, is I would have preferred someone to put together my sandwich for me.

The filling: Cheese toastie, $12
The verdict: It was an unloved sandwich, served at an unlovely communal table. The interior light was a bit purple and the feeling a bit transitory. The sandwich was quite heavy on the onion jam and therefore reasonably tart. I wanted to feel like I was being taken care of, which is a long-standing emotional issue, presumably from childhood. I didn't feel it.

The Fed, 86 Federal St
The filling: Chicken salad sandwich with cheese, $19
The verdict: The Fed chicken salad sandwich has long, and deservedly, been lauded as one of the city's great culinary totems. Unlike the restaurant's other great sandwich, the disgracefully meat-heavy reuben, the chicken at least pays lip-service to the idea of restraint.

It came between what appeared to be two bog-standard toast slices of seeded white. Creamy chicken and lettuce oozed artlessly out the side. The dish's central feature was its astonishing omnibus of fats: chicken skin, mayo, cheese and a dippable pot of gravy that just wouldn't quit. The Fed has never made any claim on subtlety or the thoughtful manipulation of flavours. It believes in excess, all the time - and so do I. As my dining companion, a frighteningly remorseless eater, said: "If I had a mug of this gravy I would drink it."

Jemima's Kitchen, 470 West Coast Rd, Glen Eden
The filling: Roast kumara, spinach, Swiss cheese, aioli, rosemary, $10
The verdict: I last went here not long after it opened four years ago when it was an excellent burger joint. It has since pivoted to daytime service and now focuses on premium toasted sandwiches. I greatly desired its slow-roasted beef brisket but it had sold out, so I went vegetarian. So astonished was I by my first bite, which tasted like a complete roast meal with all the trimmings, I opened the sandwich to check it was genuinely meat-free. Having confirmed, I reassembled it, took another bite and continued to doubt, deliciously.

Fort Greene, 327 Karangahape Rd
The filling: The Cubano, $21.50
The verdict: The cheese was clean and stretchy and the meat tasty but when I looked at the bread, I saw it was a crust. I tried to imagine telling my poor children I'd found a place where people pay to eat crusts. They would be open-mouthed and silent and would soon retreat to their bedrooms to cry quietly. 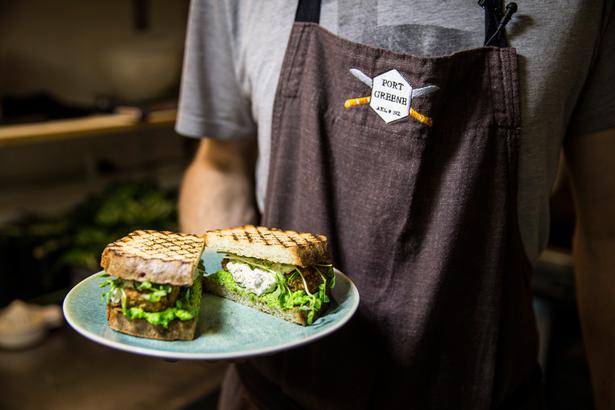 (I have just looked back at photos of this sandwich and it appears to be a batard, so therefore not really a crust at all. Sorry about that).

This is the best toasted sandwich in Auckland and probably the world. It emerged from its elegant waxed paper wrapper dense with tender steak. You could taste the good life lived by the cow from whence it came, frolicking in fields with its friends and family, before its throat was cut. The meat was layered with soft, pillowy cheese and a sharp squadron of onions. It was creamy but not dumb creamy.

The bread was thick but not obscene. The whole thing was so well-judged, exciting and appealing it made me want to accompany its eating with low lighting and the music of Marvin Gaye.

Hero Tuckshop, 66 New North Rd, Eden Terrace
The filling: CBJ, $15
The verdict: It came in a beautiful rigid brown box stamped with the company's name and logo, which communicated an unusual level of care for the product and predisposed me to its appreciation.

The bread was stuffed with pillowy, billowy chicken and those cloudlike innards were hugged by the crispy bread shell. There was a tantalising tang from the sparely applied jam. I thought it needed more but then I realised it didn't. Here was the philosophical clash of understatement versus excess - the heart of all eating - made flesh. I understood this sandwich but it understood me more.

Cheese on Toast, 931B Mount Eden Rd, Three Kings,
The filling: Just Cheese, $8
The verdict: The bread was thoughtfully chosen and the three-cheese blend offered tang up front, with a robust follow-through - a wide-striding selection, enveloping the mouth in an orgiastic mess of fat. Sliced onion and pickle was served on the side. To attempt an elevated version of something as lowbrow as cheese on toast is a test of the moxie of an establishment, particularly one with the name in its title. The extent to which the elevation succeeds is the extent to which the establishment should itself be elevated. Ding ding! Top floor!

Daily Bread, 10 Morrow St, Newmarket
The filling: Hot Meatloaf, $12
The verdict: Meatloaf is an unlovely name for an unlovely object and the workaday white poppyseed roll on which it was served was strangely unimpressive for a place presumably so proud of its bread it makes up 50 per cent of its name. There was a decent amount of meat. The main takeaway was the mustard, which I would describe as strong.

On the menu for eat in or takeaway: cheese & kimchi toasty

Good Day, 3/78 Coates Ave, Orakei
The filling: Doorstop Toastie, $10.50
The verdict: The jalapenos were juicy. The bread was grand, fat and dense with moisture. The cheese was thick and moist. It was like an overstuffed pillow into which cows had recently lactated. If that doesn't sound appealing, try to remember what you thought of salted caramel 20 years ago, when your favourite dish was apricot chicken

Festive Classics To Try This Summer