An homage to Japan's listening bars, this innovative and intimate cocktail bar from the founder of Pasture is an experience not to be missed

Vision is a powerful thing. It fuels chef Ed Verner — and the chef’s distillation of creativity and ambition are the foundation of his ground-breaking new venture Boxer.

It's, a bar yes, but it’s also much more. Verner’s award-winning restaurant Pasture is still humming along next door, but 2020 is a year for change, and Boxer challenges the very idea of "having a drink" and what that looks like now.

The term "bar" doesn’t do the place justice, and Boxer forgoes the physical thing altogether – as well as someone to tend it. Instead, two chefs will perform the theatrical alchemy required of the bar’s time-intensive cocktails, stationed at the expansive oak islands that anchor the space and seat 5-6 guests each.

Boxer makes a ritual out of imbibing, and the sleek, intimate fit-out is as sophisticated as the drinks – all soothing blonde wood and slate-hewed walls.

Inspired by Japanese minimalism, the space was a collaboration with Nat Cheshire, and the benchtops, islands and ebonised wood chairs are all by Blanc Industries. Handmade ceramics are by local ceramic artist Hayley Bridgford, while some of the hero stemware was sourced on a trip to Japan.

Before they can take their elegant seats, patrons must be met at the door by their chef. Their visit begins with a warm hand towel (another nod to Japanese hospitality) and a complimentary pour, before they traverse the seasonal cocktail menus – one offers three options, the other five.

Verner takes a rule-breaking approach to cocktails, something he attributes to his kitchen credentials. Influenced by fine dining, the drinks list features inventive, unexpected ingredients ranging from distilled lavender and smoked pineapple, to oxidised wine and fermented white asparagus.

There’s also a curated selection of beer, wine, champagne and non-alcoholic options – and Boxer is an off-license, for those who want to take something home. 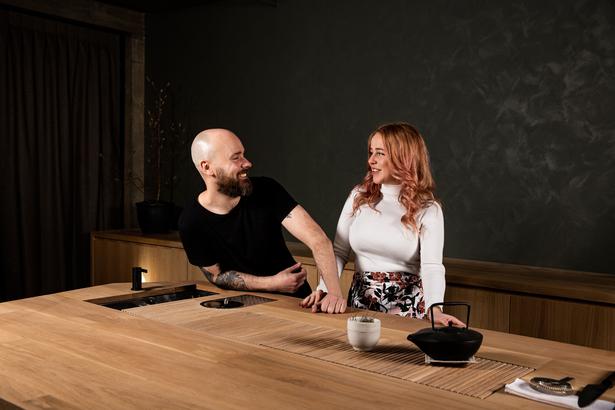 All their spirits are either distillates made in-house in a rotary evaporator, or exclusive to the bar – including offerings from Cardrona, Zenkuro and Unkel. A barrel of Thomson Whisky ages on-site.

Carefully designed, the space itself is quietly technical – fridges are calibrated, and each island is rigged with a carbon dioxide hose. There’s food too, of course – lighter fare than Pasture, and deceptively simple. Think wagyu, New Zealand king crab and seasonal caviar.

Verner had become increasingly involved in the drinks at Pasture since opening the Parnell restaurant in 2016 – a necessity due to the scale of his operation – and decided it was time for a dedicated space that offered the same care and consideration for drinks as Pasture famously does for its food.

READ: Need to Know: What Pasture Has Brought to Auckland's Dining Scene

He wanted a new challenge, and indeed that’s what he got. He signed the lease in November, but halfway through the build Covid-19 almost ended it all – saved only by the government's emergency loan scheme.

Also new to the Pasture family is Hillary Eaton. A food writer who most recently called Los Angeles home (she has contributed to Vice, Los Angeles Times, Bon Appetit and more) their partnership is serendipitous and a cornerstone of the idea behind Boxer.

Their whirlwind romance was forged in the shadow of a pandemic and traversed the globe; they followed each other from New Zealand, to Australia, and Los Angeles before racing to return to New Zealand before borders slammed shut.

Lockdown was spent finessing the Boxer concept together – what it would look like, what they would serve. Hillary describes it as a healing time for both of them, a rare period of peace and clarity in the fast-paced food world.

This focus of time and energy is apparent throughout Boxer. The bar is a considered experience, Verner explains. It’s not just drinks and food, it's about music (an homage to Japan’s listening bars) so there’s a record player and drawers of vinyl, curated by Eaton and Verner.

Time might as well be on the menu at Boxer too – it’s treated as a treasured resource. We all have more respect for it lately, and those wishing to spend theirs thoughtfully would do well to do so here.