Growing up with an Iranian father and a Mexican mother, Dariush Lolaiy describes the food of his childhood as a bit of a “cultural mash-up”. He remembers ordering dishes off the menu during weekends spent at Cazador, the restaurant opened by his parents in 1987, which he now owns and operates with his partner, Rebecca Smidt.

He recalls big Persian family feasts prepared by his father on his day off and, most fondly, his mother Barbara’s simple Mexican comfort foods that filled his childhood home with the sweet scent of cumin, tomatoes and charred chillies.

Back then it wasn’t always easy to come by authentic Mexican ingredients, so family members travelling between New Zealand and California would bring back tins of sauces, a few kilos of real tortillas and chillies to stash in the freezer, so fresh serranos could be sliced over eggs in the morning.

Each night, a rotating cast of family favourites graced the dinner table: Mexican rice with tomato and coriander; chicken pieces coated with cumin and cooked in salsa verde; quesadillas and guacamole made to exacting standards; or sopa di fideos, a chicken noodle soup Dariush’s mum still makes once a week, which Dariush says has sustained his 2-year-old daughter Azhar’s growth.

With closed eyes and flared nostrils he recalls a favourite that was often reserved for special occasions because of the various steps involved, chiles rellenos.

Traditionally, the dish is made using deep-green poblano chillies that are charred over an open flame to develop a sweet, smoky bitterness. The blistered skin is peeled away and the seeds are removed through a small incision so the chillies remain intact. 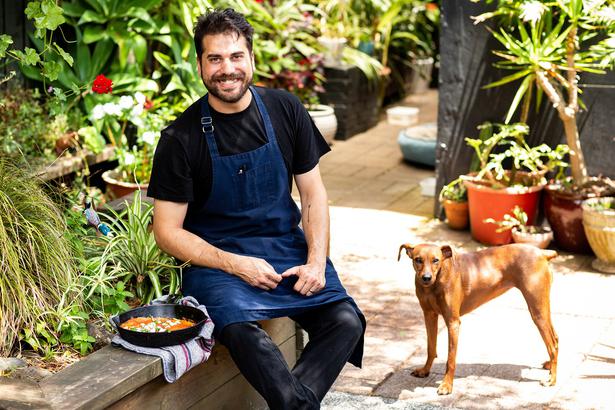 They are stuffed with a hard cow’s milk cheese similar to mozzarella or halloumi that adds a salty hit, then secured with a toothpick and coated in egg yolks, flour and finally eggs whites, which have been whipped to stiff peaks. Dariush likens it to a savoury meringue.

These are fried until puffed, golden and set, before being nestled in a simple tomato sauce made of onions, garlic and fresh tomatoes that have been smashed to a pulp in a molcajete (a Mexican mortar and pestle) and lightly simmered to finish off melting the cheese inside.

He remembers standing on a stool next to his mum coating the chillies, while she fried them using a heavy copper-bottomed pan that belonged to her mother, which she still uses to cook every day.

“The combination of those smells: the frying oil, the sweet tomato, and then especially that smell of the chilli when you are scorching it, that really lingers,” he says, “It brings back memories of that strong bond you have with mother and child. That’s kind of what you get from any comfort food, a feeling that you are being looked after and catered to, and everything’s all good.”

Dariush didn’t realise the impact the sights and smells of his mother’s kitchen had on his cooking until he went to culinary school. “I had a base of knowledge to draw from that other people didn’t have. I just assumed that it was natural to have that, because it was learned so organically.” She would often involve them in the cooking process, asking them to taste something and see what it needed, or ask what they wanted to make with the ingredients she had on hand.

“Just those little interactions were enough to build a confidence with food and also a flavour perception. And more than anything, an openness to food of all cultures, so I can quite proudly say that I can’t think of any food I don’t like eating.”

The Filipino-born chef on his favourite food traditions, making his own plates and ultimate comfort food