Despite an extremely difficult 2019, Michael Van de Elzen and his wife Belinda are roaring into the 20s with the opening of the Good From Scratch Cookery School Looking out from the deck of Michael and Belinda Van de Elzen’s Muriwai home — blessed with astonishing views of undulating hills — it’s not difficult to understand why some five years ago, the celebrity chef and his wife chose to make this magical spot the site not only for their home but their long-held dream of opening a cooking school.

On January 22 their dream becomes a reality with the opening of the Good From Scratch Cookery School. It was almost a project that wasn’t meant to be, following a year “from hell”. At the end of 2018 Michael was diagnosed with throat cancer; in January 2019 he was badly injured in a motocross bike accident; a couple of months later he suffered the loss of his best friend in a car crash and just weeks later Belinda’s stepfather to cancer. To call 2019 an annus horribilis for the couple is an understatement. “2019 [was a] shocker of a year,” says Belinda.

Despite the curveballs life has thrown at them, Michael and Belinda — or Mike and Bee as they are known — have somehow managed to stay positive, and thankfully the cancer has been eradicated following an intense course of radiation.

“There’s always someone worse off than you,” says Bee. “And I’m lucky; I’ve got a roof over my head, I can walk out to the garden and prepare a meal from what we’ve grown. But sometimes it feels like everything’s coming at you and it’s okay to have a bad day.” 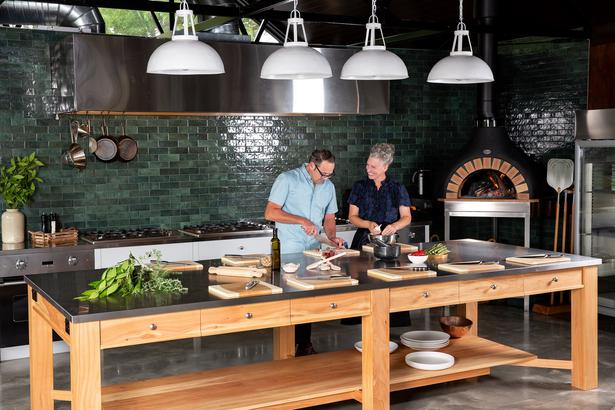 The light at the end of a very dark tunnel is this stunning 6ha Muriwai property that has provided them with not just a private haven to mourn and recover, but a crop of delicious produce from which to draw and educate. Their school’s gardens and orchards comprise 192 trees — a mix of orange, lemon, lime, grapefruit, cider apple, plum, peach, macadamia, and apricot species — that will provide fruit for students to harvest for cooking classes with Mike.

The school is the culmination of a dream inspired 20 years ago when Mike and Bee worked in a small luxury hotel called Dunbrody Country House hotel in Ireland, which had a cookery school. They made their way to Dunbrody after five intense years at London’s Bank and Quaglinos restaurants, which were incredibly fast-paced, thousand-covers-a-night establishments.

At Dunbrody they became inspired by the intimate connection with guests and students, and the farm-to-table education they were able to teach. “[It] planted the seed for our school. People discovering, collecting, cooking, learning and then sitting down and enjoying what they’ve just created,” explains Mike. 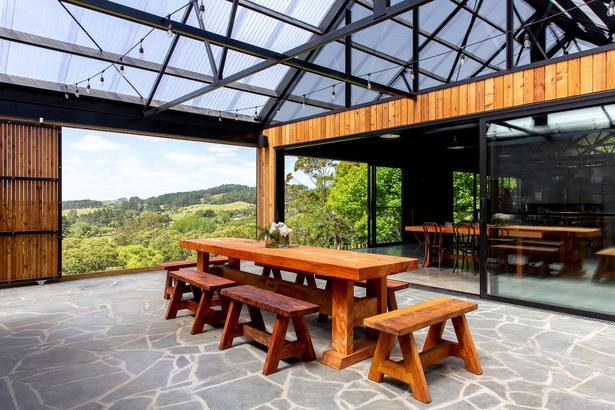 The school is housed in a modern, barn-like structure with vaulted ceilings. Photo / Babiche Martens

The Good From Scratch Cookery School’s aim is to offer a farm-to-table, or more specifically seed-to-plate, learning experience. There will be two types of classes: an immersive, full-day experience with a maximum of 14 guests who will prepare dishes under Mike’s guidance and then enjoy the fruits of their labour collectively over a glass of local wine.

There will also be a larger-format experience where up to 90 guests will watch and interact with Mike as he conducts demonstrations, and then they enjoy the food that will be prepared by a team in a “scullery” kitchen behind the demonstration kitchen. Classes suit all levels of cookery abilities and are designed to be a “fun, fabulous day out”, with long-term plans to develop workshops with visiting chefs, classes for children, vegetarian classes and more. Bee will also be conducting specialised classes at the school.

“Up until now it’s been a brand, now we have a home,” says Mike of the Good From Scratch brand, which he launched in 2015. It began after the enormous success of Mike’s highly rated The Food Truck TV series, where he essentially reinvented Kiwi classics like fish and chips but with a healthy twist; fish was pan-fried not deep fried; pies were made “from scratch” using better quality ingredients and so forth. Because of the show, people often asked him how to cook more healthily for their families, which inspired him to launch Good From Scratch. 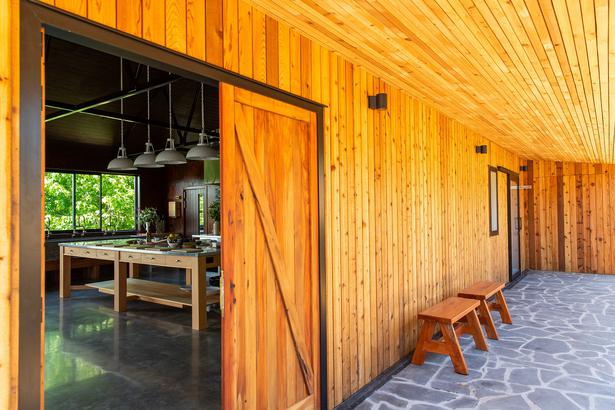 “I had so many people coming up to me asking ‘what food in the supermarket is good for my kids?’,” he recalls. “[They would ask] ‘what does that health food stamp mean? What’s the double heart tick?’. It came to a point where I was like ‘I think we need to create our own stamp’.”

The Good From Scratch brand — which makes food literally from “scratch” with quality ingredients — can be found in your local supermarket, with products ranging from beetroot and beef patties in partnership with Green Meadows Beef, to specialty dips with the Good Taste Company and nutritious wild grain mixes with Uncle Ben’s Rice.

“We learned how to take fats and sugars away and replace them with better things but not affect the flavour,” says Mike.

As its name suggests, the Good From Scratch Cookery School will teach students to make all the components in each dish, avoiding pre-made supermarket sauces and seasonings.

“We’re not buying food in jars or convenience packets. We’re not saying ‘add this heavily salted packet to that rice and you will have a paella.’ The gardens will dictate what we cook on the day. What’s seasonal.” 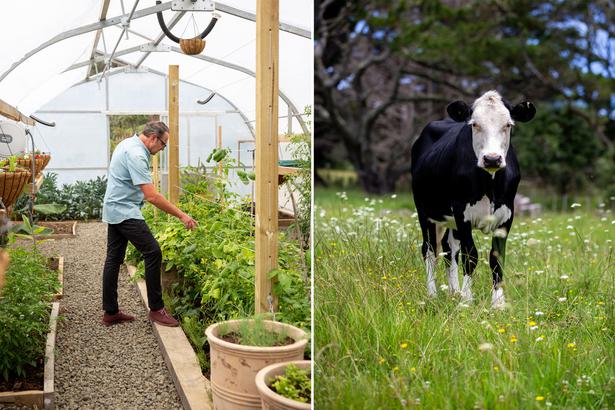 (Left) Michael tends to the produce grown on site for his cookery school. Photos / Babiche Martens

The school’s seed-to-table ethos is what most excites Bee. “Growing the food is just as important as the actual class,” she says. “People want to know where their food comes from now, don’t they? There’s something very satisfying about taking that seed, nurturing it, watching it grow. And then when it’s ready to harvest, taking it back to the kitchen, preparing it, and ultimately enjoying eating it.”

For the school’s location the couple had considered Waiheke, Kumeu, Matakana and Waimauku first before finding their piece of paradise in Muriwai. After years of looking — “Bee was harassing every single real estate agent out there,” says Mike with a laugh — they found the Muriwai property in 2015 through a contact of Mike’s father. They went to see it on a Saturday morning, which happened to be Bee’s birthday, and made an offer that night. “The couple who sold it were just about to list it. We were lucky. We came at the right time.”

The school is housed in a modern, barn-like structure with vaulted ceilings, perched on a ridge with the same beautiful views as their home which sits further west on the property. The couple enlisted the help of local architect Gemma Muir to realise their vision. “We created mood boards, Pinterest became our best friend,” says Mike. The barn features cedar cladding that “as it ages will silver up and will start to look pretty cool”, he says. 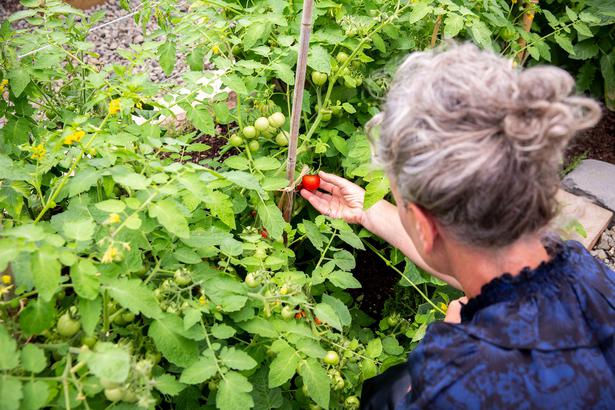 The 6ha Muriwai property boasts a crop of delicious produce from which to draw and educate. Photo / Babiche Martens

The barn is a large yet intimate space that feels warm and inviting; chic emerald green tiles juxtapose industrial-style pendant lights; a large, communal “trough” sink with classical brass taps and exposed pipes add a cool, modern accent. Large windows that frame the sweeping valley views add a sense of drama. Outside on the wind-protected deck a custom-made Engel fire doubles as a rotisserie and fireplace.

The couple has been very hands-on throughout the project; Mike found the trough sink on Trade Me, which Bee spent hours sanding down. They eschewed full commercial ovens and cooktops for more residential models — including revered Viking ovens — because they wanted students to be able to relate to appliances in their own homes.

Mike and Bee love their Muriwai life, especially the effect it has had on daughters Hazel, 8, and Ivy, 7, who go to the local school and attend surf life-saving classes on Sunday. “They’re part of the reason we did this. I was brought up on a farm,” says Mike. “It was just cool. In the holidays you didn’t have to plan anything. You could just hang out with Dad or hang out with Mum. [Hazel and Ivy] can actually just be with us.” 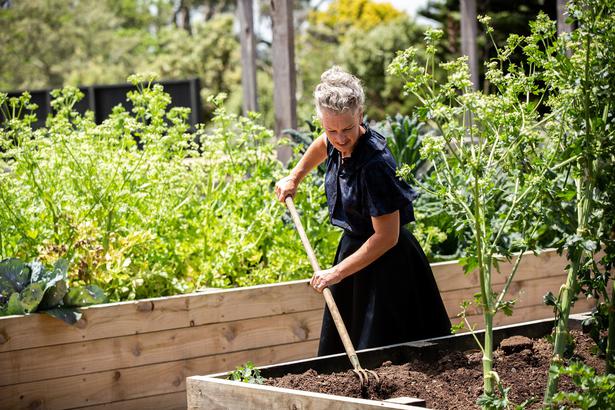 Beyond launching the school, Mike’s been busy back in front of the camera, filming Eat Well for Less, a New Zealand adaptation of the international hit TV series, which he is co-hosting with chef Ganesh Raj of The Tasting Shed restaurant in Kumeu. The show — to be aired this year on TVNZ 1 — is about helping families eat and cook better, while adjusting their spending in the process.

READ: What's It Like To Live With A Chef?

“Some families were spending horrendous amounts of money on nothing. And at the end of the week they were bagging all this rubbish up and throwing it all away. We could come in and genuinely help [them] save some money and eat better,” says Mike. “At the end of the week the families were so thankful for what we had done. I’m still getting letters from [the families]. It’s very rewarding.”

Mike has an impressive pedigree as a restaurateur — with Molten and Food Truck Garage under his belt — but has no plans for another restaurant, citing the difficulties the industry faces today, particularly in finding staff and astronomical rents. “Even doing [the school] is going to have its challenges but at least we are the landlords at the end of the day.”

• Classes at the Good From Scratch Cookery School can be booked online at Goodfromscratch.co.nz.

Fancy a day trip? Matakana is well worth the drive for local markets, great dining, nearby beaches, and much more

Neighbourhood Watch: What To See, Eat & Do In Piha

Just a short drive from Auckland, discover stunning walks and waterfalls, good food, and one of New Zealand's most iconic beaches