Jonathan Gold eats at a restaurant four or five times before he even considers writing a review. If he’s unfamiliar with the cuisine, he’ll visit a place many more times than that — his record is 17. He doesn’t usually take notes during his meal, either. That would be like taking notes during sex, he says; you’re bound to miss out on something.

Although his reviews of eye-wateringly expensive beef and gooey octopus sashimi helped earn him a Pulitzer Prize in 2007, he’s best known for his expertise on cuisine that’s easy on the wallet — spicy noodle soup, all-you-can-eat Korean barbecue or punchy tacos, expertly sourced in out-of-the-way Los Angeles suburbs, the places only insiders know.

The Los Angeles Times food critic, with his scruffy shirt, suspenders — and long hair that rivals Bill Bailey for sparsity — has lifted his mask of anonymity for a new documentary, City of Gold, which charts his quest for the unusual and flavoursome.

“I get bored by somewhere that is the 17th best Italian place in town, if they’re serving the exact same dish that everyone else is serving, with a couple of variations,” says Gold over the phone from Los Angeles, where he grew up, and lives with his wife and children.

“I realise my predecessors dealt with precisely that, and you’d read restaurant reviews from New York in the 1950s or 1960s and they would all talk about who had the best sole meuniere, and who had the best quenelle de brochet, and it was almost like those compulsory figures that they used to have at the beginning of every figure skating match.”

It was this repetitive nature of food critiquing that drove Gold to search not only for dishes that he’d never encountered before, but entire cuisines he didn’t know existed — from restaurants specialising in the delights of hagfish to the more palatable and varied flavours of Vietnamese pho. 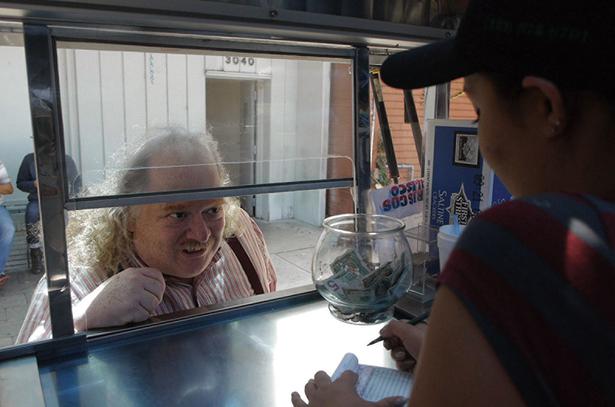 Given that he writes around 150,000 words a year on different cuisines, it’s just as well Gold has found a way to remain enthusiastic about food.

“It’s like being a theatre critic. Every time the curtain goes up you have to be hoping this is the one that’s going to knock everything you’ve ever believed backwards and make you redefine things. That happens often enough with food that I truly always look forward to the next meal.”

That said, just as a fashion writer tires of describing trends or aesthetics, Gold admits he’s sick of writing words like crunchy, salty and crisp. Instead, he describes the heat of Sichuan peppercorns as “a mysteriously pleasurable punch in the mouth” and illustrates shrimp as “banana-size creatures, the sight of which could empty a beach as quickly as the fin of a great white shark”.

But it’s not just the words he uses to describe certain flavours or dishes that have made him a legend in the world of critiquing — it’s the cultural context in which he puts them. “He’s so much more than a food writer,” says radio host and culinary multi-tasker Evan Kleiman in the film.

“Jonathan is a cultural commentator, who uses food and restaurants as a way of creating these little commentaries on modern life.”

Gold’s reviews have allowed many small businesses in Los Angeles to grow from small holes in the wall to establishments seating 300. This power isn’t lost on him, and he keeps it in mind when he’s less than impressed by what a restaurant is serving up.

“If you’re a film critic, and you don’t like the latest Batman film, then somehow Warner Bros is still going to exist tomorrow. But the idea that you’re putting 40 people out of work because you have a certain opinion is an odd position to be in. Mostly because they’re not bad people — they may be bad at their jobs, but there’s a more immediate effect.

“The restaurants I find intolerable, I just don’t go to. Because if you’re going to write a bad review, the idea of going to a hideous restaurant five times just to insult it seems odd because there are so many interesting places. 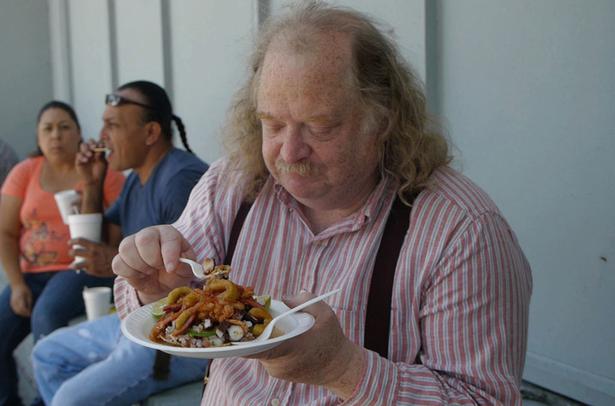 “That being said, people really love negative reviews, and if there’s a place that’s doing real sort of harm to the public, I don’t hesitate to call it out. I did a review of Gordon Ramsay’s restaurant in Los Angeles and it was so cruel they reprinted it on the front page of The Independent in London.”

Gold, who’s as romantic about Los Angeles as others are about the Amalfi Coast or the French Riviera, says there’s a huge misconception about what the sprawling city is really like.

“I think people who haven’t spent time here think of Los Angeles as being either the noir thing from Raymond Chandler, or they think of it as being this shiny city of Hollywood and what they’ve seen on television. I don’t think people realise just how enormous it is and what a mosaic of people from all over the world it is.

“You can spend your entire life speaking nothing but Korean, you can go to Korean language schools, get your hair done in Korean, you can eat in Korean-speaking restaurants and be buried without having to speak anything other than Korean. It’s inward-looking, and the communities are very insular, which is not necessarily good for a lot of the city, but for the cooking, it’s brilliant.”

In a way, City of Gold is not only a tribute to the critic himself, but of his attempt to convince the rest of the world Los Angeles isn’t the superficial, hollow place it’s perceived to be. Rather, it’s a smorgasbord of different cuisines that are as authentic as if you’d travelled to their original countries. An argument so convincing, you’ll want to jump on the next flight to LA.

• City of Gold shows July 18 and 20 at SkyCity Theatre in the New Zealand International Film Festival.