It's difficult for Makoto Tokuyama to pin down one dish that reminds him of growing up in Saga, Japan.

Living in a Zen Buddhist temple meant mealtimes were always shared with the extended family, and often consisted of seafood wrangled from the nearby ocean that morning, fresh dishes of seasonal vegetables donated by nearby farmers, and an array of pickles, soup and rice all prepared by his grandmother, Chizu.

"A lot of food I serve here is really connected to my grandma's cooking," he says of the dishes at his restaurant, Cocoro, "I do a restaurant version so people don't realise it's my grandma's food, but for me there are a lot of things connected to her." Being near the Ariake Sea meant almost every day they ate fresh seafood. Makoto says that's why he loves creating Cocoro's signature sashimi platter, a striking masterpiece that showcases more than 30 different species.

"There used to be a local fish market close to my house. Every morning the fishmonger would go to the market and then come to my house in a small truck. My grandma would pick whatever she wanted, and in the evening she would fillet the fish for sashimi and use the offcuts to cook a dish called arani."

Arani is made by simmering the head, bones and other offcuts of fish in a soy-based broth, with ginger, spring onions and seasonal Japanese root vegetables, such as daikon. A popular garnish is the kinome leaf, a Japanese herb that numbs and tingles slightly on your tongue with a mild peppery-citrus flavour.

Makoto says arani reminds him of the way his grandmother respected ingredients and created very little waste — teachings he has carried with him through life and into his restaurant. 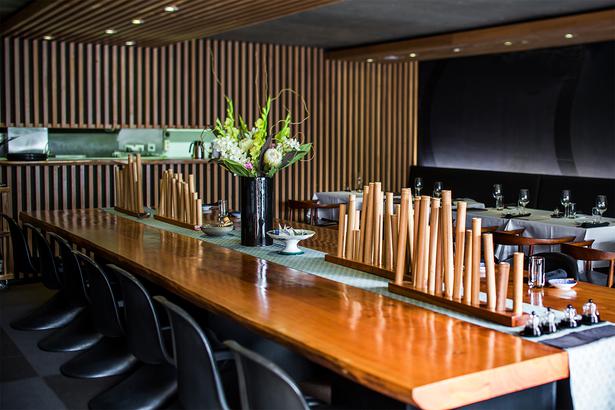 When he was 24, Makoto spent a year practising as a Zen Buddhist monk. Every day he ate a variety of simple, vegan dishes that used all parts of the vegetable, the skin, the leaves and the sweet tender stems, which he now saves for himself as a snack when they prepare the sesame spinach dish on their menu.

"Now I realise this kind of food was amazing, people there appreciated all the ingredients and cared so much about the detail. When I was young, I didn't realise that I liked that kind of food, but now I'm 42 and I'm starting to feel like I really, really love that kind of food. It reminds me of home."

When he thinks about the meals from home, it's not a flavour but a feeling that he misses the most. His older brother now runs the temple and Makoto says sometimes when he visits, there can be up to 30 of his family members, who will all eat together and stay the night, "kind of like a party".

"That's why I love to see the customers come to my restaurant, eat nice food and be happy, that makes me happy. I love to see families eating together and laughing."

Despite an extremely difficult 2019, Michael Van de Elzen and his wife Belinda are roaring into the 20s with the opening of the...