Skip boring vanilla and try one of these exciting flavours instead

Roasted carrots lend their sweetness and a lovely colour to this icecream, which is graced with a terrific crumble.

We found that honey used to coat the roasting carrots tended to burn in spots and create a charred taste that does not translate well to the icecream base, so you may want to watch them closely in the oven and avoid that scorching.

You'll need an instant-read thermometer and an icecream maker.

The icecream base needs to be refrigerated overnight. The churned icecream needs to firm-up in the freezer for at least three hours and will keep for one to two months. The crumble will keep for up to two weeks in a sealed container.

1. For the icecream: Preheat the oven to 200C. Line a baking tray with baking paper.

2. Toss the carrots with the oil and 1 tablespoon of the honey. Arrange them in a single layer on the prepared baking tray. Roast (middle rack) for 20 to 35 minutes, turning once halfway through, until tender and just starting to caramelise (see note above). Let cool, then transfer to a food processor and puree until smooth. The yield is 1 cup.

3. Whisk the egg yolks in a medium bowl, until smooth.

4. Combine 3 cups of the heavy cream, the sugar, vanilla bean pod and seeds, and the remaining 3 tablespoons of honey in a medium saucepan over medium-low heat. Whisk in the carrot puree until completely incorporated. Cook, whisking, until the mixture reaches 55C, then remove the pan from the heat.

5. While whisking, slowly drizzle about one-quarter of the cream-carrot mixture into the egg yolks (to temper it), then pour it all back into the pan and stir with a wooden spoon to combine. Cook over medium-low heat, stirring continuously until the mixture reaches between 75C. Do not go above this range or the egg yolks may scramble. Immediately remove from the heat and stir in the remaining 1 cup of cream. Strain the mixture through a fine-mesh strainer into a glass container, cover and refrigerate overnight. Discard the solids.

6. Churn the chilled icecream base in an icecream maker according to the manufacturer's directions. Scrape the icecream into a jar or pan, cover with a piece of plastic wrap or baking paper pressed directly to the surface of the icecream, and freeze until firm, about three hours.

7. For the crumble: Preheat the oven to 175C. Line a rimmed baking sheet with baking paper.

8. Combine both sugars, the butter and water in a small saucepan over medium heat. Cook, stirring continuously, until the sugars have dissolved and the mixture is bubbling. Stir in the nuts and sesame seeds, then remove from the heat and pour onto the baking tray. Use a spatula to spread the nuts and seeds into an even layer. Bake (middle rack) for about 13 minutes, until the syrup has set and is lightly golden. Let cool completely.

9. Even though the cooled slab may still be pliable, break it into pieces and transfer to a food processor; pulse to a coarse-crumb consistency.

10. To serve, scoop the icecream into bowls and top with a sprinkling of the crumble and pink salt, if using. This non-dairy frozen dessert is beautiful, bright-tasting and subtly floral. You'll need an icecream maker. The sorbet mixture needs to firm up in the freezer for at least four hours before serving.

1. Combine the rhubarb, sugar and lemon zest and juice in a small saucepan over medium heat. Cook until tender and soft, about 10 minutes. Let cool.

2. Stir in the liqueur and simple syrup, then strain the mixture through a fine-mesh strainer into a large liquid measuring cup. Discard the solids. Pour the strained mixture into an icecream maker container and churn for about 50 minutes, until visibly thicker and smooth.

3. Transfer to a freezer-safe container, cover and freeze for at least four hours, or until firm.

Note: To make the simple syrup, combine ¾ cup sugar and ¾ cup water in a small saucepan; bring to a boil over medium-high heat. Allow the mixture to boil just long enough for the sugar to dissolve, about 1 minute. Remove the pan from the heat and let cool. Pour into a jar with a lid and refrigerate for up to a week. 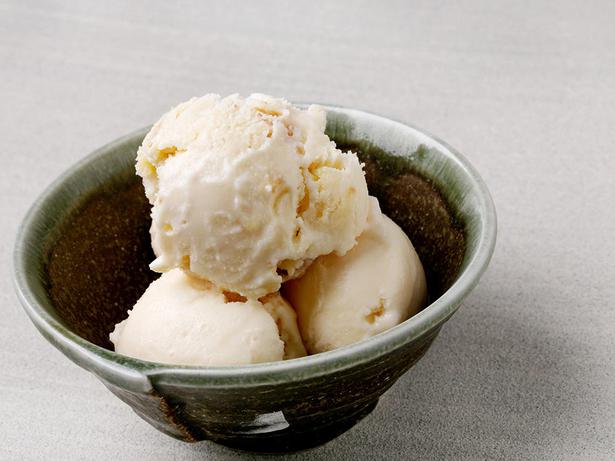 A nice drizzle of dulce de leche icecream on top of a slice of cake is delicious. You'll need an icecream maker. The icecream base needs to be refrigerated for at least an hour, and up to overnight.

1. Position a rack in the centre of the oven; preheat to 175C. Grease the bottom and sides of a 9-inch square baking pan with cooking oil spray or baker's spray. Line the bottom with parchment paper and lightly butter the parchment paper.

2. Sift together the flour, baking powder and salt into a bowl.

3. Combine the egg yolks and ¼ cup of the sugar in the bowl of a stand mixer or handheld electric mixer; beat on medium speed for about 5 minutes until pale and creamy. Stop to scrape down the bowl. Add the milk and vanilla extract; beat on low speed until combined, about 1 minute more. Clean and dry the beaters, if using.

5. Whisk one-third of the flour mixture into the yolk mixture until thoroughly combined. Using a rubber spatula, gently fold in one-third of the egg whites. Alternate folding in the remaining flour mixture and the remaining egg whites in a total of four additions. Pour the batter into the prepared pan and bake (middle rack) for about 20 minutes, until a toothpick inserted into the centre comes out clean.

6. Cool in the pan on a wire rack for 10 minutes, then invert the cake onto the rack, remove the parchment paper and allow to cool to room temperature. Cut the cake into 1-inch cubes and freeze on a sheet pan until ready to use. (If you'd prefer the cake cubes to have a bit of crunch in the ice cream, before freezing, toast them on a baking sheet at 175C for about 6 minutes, until golden brown.)

1. Whisk the canned milks, half-and-half, vanilla extract and salt in a large bowl until well combined. Cover and refrigerate until cold, at least 1 hour or up to overnight.

2. Freeze and churn in an icecream maker according to the manufacturer's directions. Once the icecream has finished churning, mix in the frozen cake pieces.

3. For a soft consistency, serve the icecream right away; for a firmer consistency, transfer it to a container, cover and allow to harden in the freezer for two to three hours. 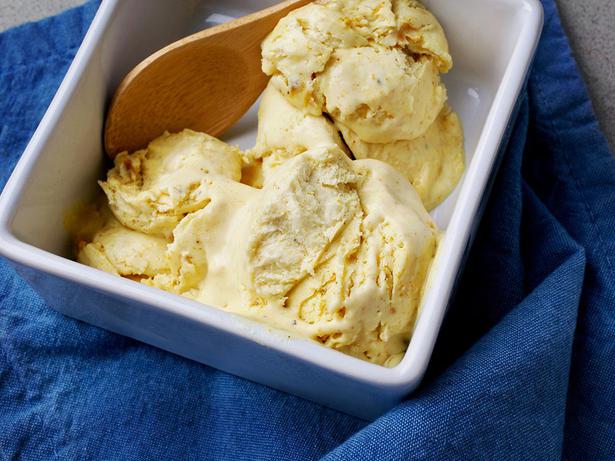 This unexpected, sweet-with-heat combination of flavours is one of the richest-tasting no-churn icecreams we've tried. If you can't find peanut or peanut butter powder, simply grind roasted, unsalted peanuts to a fine powder in the food processor.

1. Pour the condensed milk into a large bowl. Stir in the powdered peanut butter, milk powder, curry powder (to taste) and vanilla extract until well incorporated.

2. Beat the heavy cream in the bowl of a stand mixer fitted with a balloon-whisk attachment or use a handheld mixer. Beat on medium-high speed for 5 to 7 minutes, to form stiff peaks.

3. Mix a few spoonfuls of the whipped cream into the condensed milk mixture, then fold in the remaining whipped cream until fully incorporated. Do not over-mix.

4. Spoon the mixture into a container and freeze for at least five hours before serving. 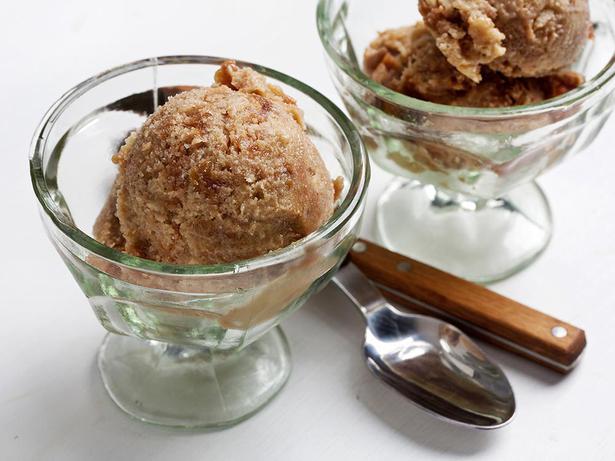 Bananas form the base of vanilla and chocolate flavours that are blended here with your choice of mix-ins; the author recommends crushed nuts, chopped dates, dried cranberries and the like, but we liked the combination of chocolate chips and toffee bits best.

You can make this faster using an icecream maker. The bananas need to be peeled, chopped and frozen at least two hours and up to six months in advance. The vanilla and chocolate flavours each need to be frozen for at least three hours.

1. For the vanilla nice cream: Puree the bananas, vanilla extract and salt together in a food processor. Stop to scrape down the sides of the work bowl every 30 seconds and keep blending until smooth and creamy. Add the dates and coconut cream to the mixture and puree for a few more minutes, until fully incorporated.

2. Transfer the vanilla nice cream to a freezer-safe container. Cover and freeze for three hours, stirring every 30 minutes to prevent ice crystals from forming. Alternatively, pour this mixture into an icecream maker and prepare according to the manufacturer's directions.

3. For the chocolate nice cream: Puree the bananas, cacao powder or cocoa powder, and salt together in a food processor. Stop to scrape down the sides of the bowl every 30 seconds and keep blending until smooth and creamy. Add the dates and coconut cream to the mixture and puree for a few more minutes, until fully incorporated.

5. At the end of the three hours of freezing, transfer the two nice creams to a medium mixing bowl and gently fold them a few times without completely mixing. Pack into a container, cover and freeze. Allow to sit at room temperature for 15 minutes before serving.

Try this cake with an irresistible cream cheese icing