In Mishearings sounds are not as they seem. In my exhibition of multisensory installations, auditory illusions and sensory crossings — that harness hearing, taste, smell, touch and vision — are used to intensify, create ambiguity or even completely alter the audience’s perceptions of what they’re experiencing.

Many of the mishearings employed in the show held this month at The Auricle Sonic Arts Gallery in Christchurch are created when hearing interacts with other senses. As both a wine writer and sonic artist, the way sound and taste interact is something I’ve explored in some depth, reinforced by the growing body of psychological studies into crossmodal correspondences in recent years that are revealing the powerful influence the senses have over each other.

I’ve applied these findings in Mishearings, tapping into strong and often subconscious sensory associations to heighten the audience’s experience in a work such as in Carbonic Oscillation. This is an immersive chamber that’s inspired by and includes sparkling wine as an integral element, aiming to blur the boundaries between the senses, and also between the art and its audience. 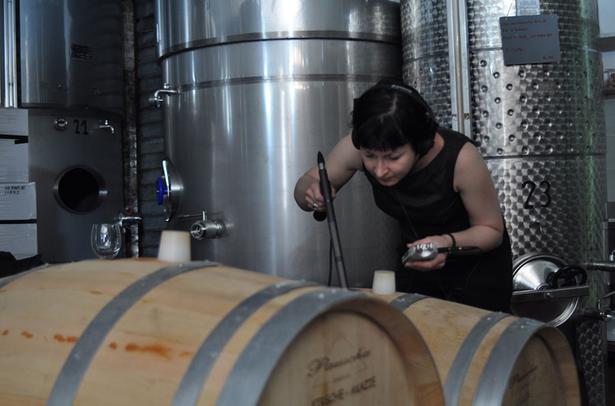 Another piece, Bittersweet, is an artistic expression of the findings of the research paper A Bittersweet Symphony* which showed that a higher pitched soundtrack makes people perceive what they taste to be sweeter, while a lower one enhances bitter flavours.

In my exploration of idealised notions of food production, Bittersweet, (an audio work created using eight speakers and chocolate), these correspondences intensify and add a layer of ambiguity to a soundscape that cycles between low pitched industrial drones and high pastoral frequencies that change the perception of the flavour of the chocolate from bitter to sweet.

While life is experienced through the complex interplay of the senses, this is not something reflected in the majority of Western art. The senses tend to be separated out, with the visual given preference; sound considered secondary and only starting to resonate in the gallery, and taste and smell often scorned, despite their ability to connect with vivid and emotionally charged memories.

I question this hierarchy, convinced that smell and taste are just as relevant in art as the other senses. This is something I’ll also be exploring in a number of events which will run alongside Mishearings throughout this month. These will culminate with Sensation: A Multisensory Dining Experience, a collaboration between myself, chef Alex Davies and visual artist Toshi Endo. We’ll be presenting a meal around seven themes/courses, which take their cues from all the sensory realms.

In Mishearings, what is heard may not be what was expected, but in mingling the senses, complex connections are made that are potentially more profound than those offered by one sense alone.

• Mishearings, The Auricle, Christchurch, June 4-28, 2015. For more information about the exhibition and associated events, see auricle.org.nz

The Best Wines on a Budget

If you're looking for a bargain, these wines are your best options

Mango, green herbs and jalapenos make these wines stand out from the crowd