The venison heart on the menu at Cazador. Photo / Sylvie Whinray Though it probably doesn’t feel short to the owners, Cazador’s transition from ageing novelty restaurant to stylish millennial hangout has happened quickly and completely. My first few visits around 2010 were with offal enthusiasts but it says a lot that, in 2020, when my wife found out I was planning to go here with other people, she objected loudly (or rather, she objected in her own idiosyncratic way — by texting me other restaurant suggestions all day until I eventually took the hint, moving our group meal to another restaurant and punting my Cazador booking into the following week, with her).

Second-generation owners Dariush Lolaiy and Rebecca Smidt have made changes carefully, incrementally and according to their budget. The dated decor was an easy punchline for an emerging restaurant reviewer 10 years ago but the couple probably deserved better, having taken on the risk of a heritage restaurant and set about building a new audience without alienating the old. They did that successfully, won some awards and are now in the process of turning their own restaurant into something even more exciting, adventurous and future-fit.

They’ve removed a whole room of restaurant seating and turned it into a daytime deli, a career dream of the chef’s that also has the effect of substantially cutting capacity. This means that if you want to go to Cazador on pretty much any night of the week, you will now have to book in advance. Only they will know if this makes financial sense but it’s hard to imagine that a smaller, family-run restaurant, which never has an empty table, can be anything but positive for the annual accounts. 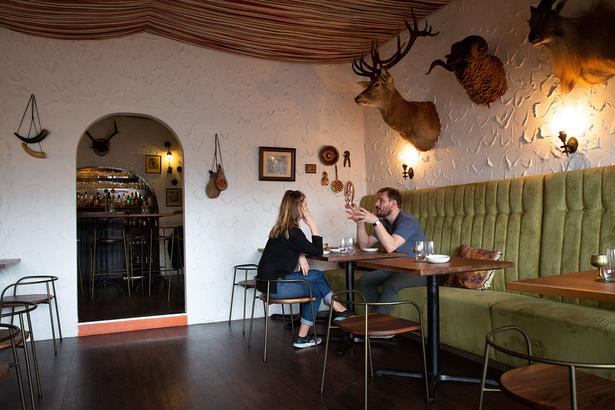 A whole room of the restaurant seating has been removed and turned into a daytime deli. Photo / Sylvie Whinray

The feast option is also new and I love it very much. Even when the 1980s had been completely rinsed out of Cazador’s look and feel, ordering a la carte still felt like a retro experience and, worse, it meant you were missing out on most of the menu. Now, you can pay $80 and have 10 things brought to you without committing too much precious stomach real estate to any of them. It works and is truly the best way to receive the gifts of one of my favourite Auckland kitchens.

The feast begins with venison broth: a simple, soulful cup of deep stock embodying Dariush’s nose-to-tail, flesh-to-bone philosophy. ‘Cazador’ means hunter and the restaurant is at its best when it reminds you that you are eating the way humans learned to eat: not by cutting out the tender fillets and moving on but by carving, scooping and boiling out every last mouthful of nourishing flavour from the beast.

At some evolutionary point we learned how to cure meat, making the hunt for the next animal a little less desperate. The Cazador deli is a tribute to this counter-bacterial wizardry and the best preserved meats of the moment are presented on dish three of the feast, charcuterie, a sprawling platter of carnivorous delights, a quivering duck parfait and some crackers and condiments to eat it with. 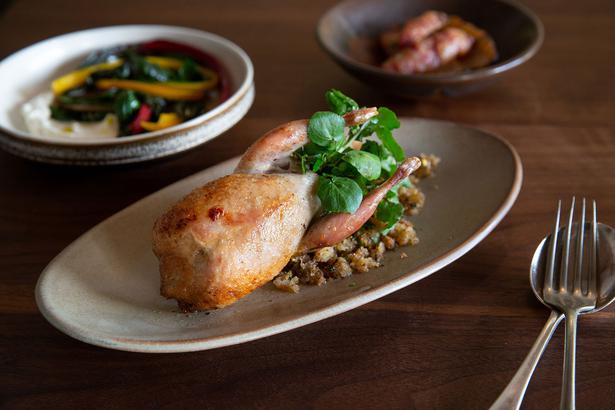 And, I mean, I was excited by the dish of venison heart that came next but it’s a big move to compulsorily put it on a tasting menu. It is served beautifully, on a white bean puree with crunchy almond slivers to help distract you from the rare, sliced love-muscle but the nervous among you may find yourself pushing this around the plate a bit trying to swallow your courage. My advice is to dive in, feel instead of think, and enjoy one of the loveliest dishes you’ll be served that night.

There isn’t a single mis-step on this menu, every dish tasting of inspiration and assurance. This is the chef who painstakingly tunnel-boned 94 poussins at his own wedding because he wanted to make sure they were done properly.

Unsurprisingly, the poussin (tiny whole chicken) is a highlight of this feast menu, which delivers more than you expect without the intimidation and sheer can’t-be-botheredness of a formal degustation. They’ve hunted hard for the meat on this menu; the least you can do is hunt down a reservation.

Poussin with Pumpkin and Quinoa Stuffing