There are a few Asian-style restaurants in this block of shops just off the motorway in Manukau, but I suspect Chinoiserie is the only one with its Instagram handle stencilled on the ceiling. To be fair, the restaurant is very taggable; the food and the decor are colourful and, occasionally, dramatic.

READ: Jesse Milligan Discovers The Spiciest Dish Ever In Parnell

This is the second, what do we call it, “branch?”, of the restaurant to open after almost five successful years for the flagship, found in an equally unlikely retail block in Mt Albert. The locations work in the customer’s interests — the food is CBD-standard, but opening up next to, say, a Mobil petrol station means you don’t have to claw back your rent through a mark-up on edamame beans. 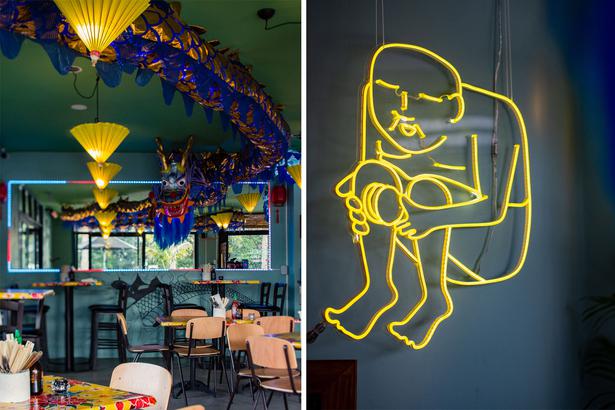 The colourful decor echoes the aesthetic of the original eatery in Mt Albert. Photo / Babiche Martens

I visited alone, having been unsuccessful in tempting my colleagues with a late-night, short-notice dinner 30 minutes from home on the rainiest night this winter. “Your loss,” I said, unconvincingly. But I turned out to be right. Everything about this little place is super, and what a cool little asset for Manukau — a first date option to rival both Rainbow’s End and Bronco’s Steak House.

No date for me though, just a guy on his tod trying to pretend that the New Yorker magazine he’s holding is more interesting than what’s on his phone, in his pocket. It’s no competition of course — 10,000 words inside the Whitewater scandal will never have the endorphin appeal of scrolling through the holiday photos of strangers. But I kept my android stowed and, instead, stared at the blurry words on the page, luckily not having to fake it for too long before the food started arriving hot and fast. 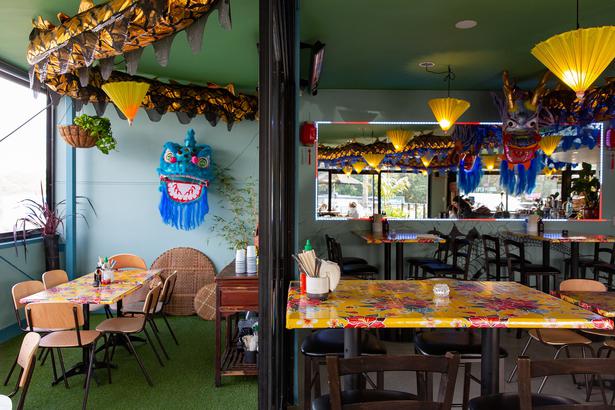 The menu is divided into “Bao” and “Sides”, which tells you something about the restaurant’s signature dish and how imperative they think it is that you order one. Baos are those really soft steamed buns folded like a taco to resemble Pac Man eating pork. Here you have a choice of fillings and, when the vegetarian waitress seemed non-commital on the tofu, I went for karaage chicken, which was the best fried chook I’ve had for ages — the batter coating so crunchy it was like they’d used that 1980s trick of tossing it in cornflakes before frying.

Despite them classically being a Chinese-Taiwanese thing, you can find bao in Japan, and those flavours worked well here (hard to think of a flavour that wouldn’t work in a bao, really), with sesame mayo and pickled ginger lighting up every receptor on your tongue and brain. At Chinoiserie each bun is held together with a toothpick, a cruel booby trap for the hungry. 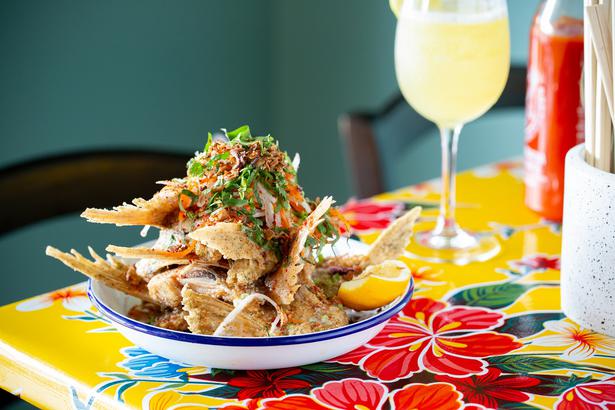 As with dumplings or ceviche, you can put bao on the menu and pretty much guarantee it will sell. But there are signs the restaurant isn’t just here to serve crowd favourites. Its snapper wings are one of the loveliest dishes I’ve come across this year — but also one of the trickiest. Not every diner will have the patience to chew their way around bones and fins but if you persevere you’ll be rewarded with a mouthful of fish whose juiciness you simply can’t achieve with a plain fillet.

Nobody would notice if this dish wasn’t on the menu, so good on the chef for serving the wings — a big, stacked pyramid of fleshy morsels that would be offcuts in a lesser kitchen. They come with fried shallots, sweet chilli tamarind and a lemon coconut dip. If that isn’t enough to make you order them, perhaps taste buds aren’t for you.

It’s a star dish, but the noodles are fantastic too — springy and moreish, served with pork mince (again, what wouldn’t that go with?), green beans, coriander and peanuts with a Szechuan coating so subtle you don’t notice initially that your tongue is numbing. 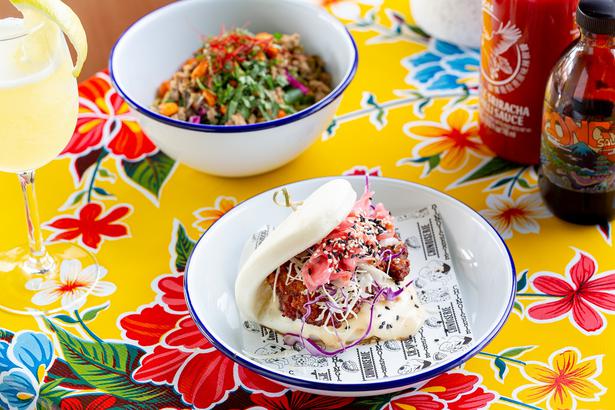 The chicken bao and the noodles. Photo / Babiche Martens

The restaurant offers a diverse set of spaces for a diverse set of people. A courtyard will do great business in summer, with plenty of foliage to block the view of the carpark and cold craft beer on tap to help you wash away the remaining flavours of the last dish and whet your appetite for the next one. But even inside on a stormy night this is a grand oasis, a warm and bright room with an ornate paper dragon wending its way around the ceiling and creating its own ceremonial atmosphere.

This is a menu of unmissables, a catalogue of bell-ringing flavours that is enough to get you off the couch and into your car. I’d expected to conclude that this opening was good news for the locals but it’s even better than that. You should go out of your way to eat here — leave the magazine at home and bring a crowd of people so that you don’t have to leave anything off your order.