Taiko is tucked away next to the Kingsland train station. Photo / Babiche Martens There is nothing particularly bad about Taiko but there isn’t enough good about it either. It should be one of Auckland’s great, secret destinations — off the main drag, tucked away next to Kingsland rail station as a little treat for Auckland commuters and Blues season ticket holders. But both these groups of people should know by now that their luck is out.

There are some comfortingly familiar elements of good Japanese dining here: when you walk in the staff call out a friendly greeting, and there are all sorts of fresh and fried curiosities on the menu. If the beer list was more interesting you could have a post-work nosh here quite happily, but there was so little to drink we considered ordering nothing at all. We settled on a warm sake then moved on to tankards of Sapporo, but never quite managed to hit the spirit of happy revelry that would have made this place feel like a winner. The surroundings are part of the problem, with way too much lighting and no real thought to the music. Compared to Kushi, where the quirky wood-furnished room sets the mood, or even the reassuring dimness of a Tanuki’s Cave or Nishiki, Taiko has the atmosphere of a Mitre 10 whiteware department. (Speaking of Kushi, I recently received a WhatsApp message featuring two men I didn’t know standing in that restaurant doing the fingers to me — apparently the review in Viva had an impact and it’s now hard for locals to find a table. Soz!)

The food started great but then slowly got worse. This happens so often in restaurants and I reckon the kitchen isn’t always to blame. “Hunger makes the best sauce,” my mate Ben reckons and as such you’re much more likely to forgive or fall in love with a starter or entree so long as it tastes like food. But by the time you’ve had bread and snacks and other matters you tend to approach your main meal with a much more critical eye, and with your palate already smashed to bits by all those early flavours. 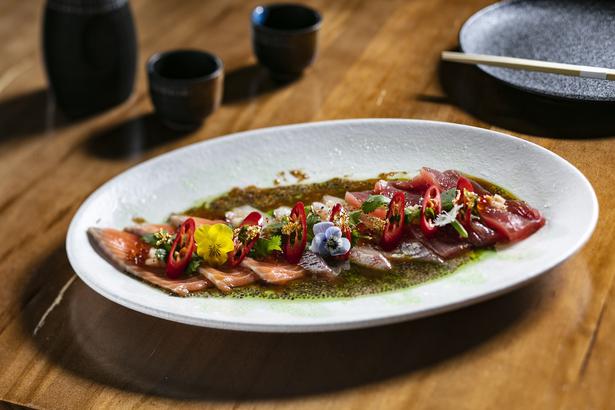 But I’m convinced there was a clear line at Taiko between the early good stuff — in particular a beautiful, delicate plate of sushi — and that which came later. I think your best rule of thumb here is to stick to the cold dishes — a plate of blanched, chilled broccoli in a sesame dressing was one of the loveliest things we ate.

We were each handed three or four different menus to manage when we sat down, and I spent some time staring at a list of sushi specials under the heading “TOUCHED”. I’d just that day interviewed a woman whose app offered discounts on food that restaurants were about to throw out so the idea of cutting prices on sushi that had already been physically pawed by another customer wasn’t completely ridiculous. But when I asked the waiter what it meant he laughed with surprise and confirmed that it was supposed to say “torched”. Typos happen of course, but these menus were laminated so I don’t know how it hadn’t been spotted before now. Anyway the torched sushi was the best thing on the menu and you must order it if you go here. We got a combination of salmon, beef and scallop, and with the lick of the flame plus the special house sauce it’s hard to imagine a nicer way to start a meal.

The fried stuff is just okay — octopus balls were tasty and worth ordering for the inevitable banter about how many an octopus might have, while the karaage chicken is a little tired and with so much great fried chicken out there these days you probably shouldn’t waste your time. 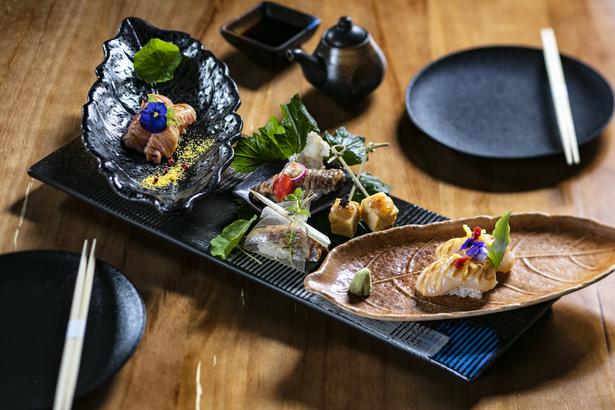 And then the mains were a bit of a bummer. The agedashi tofu was big puffs of the stuff in a thin, not very nourishing broth, while the Scotch fillet was a bit of a Frankenstein dish; chunks of slightly too-rare beef on a board with (not making any of this up) chilled mashed potato, stewed peach and a couple of things I’ve put lots of question marks after in my notes. Couscous?? Tartare sauce???

So a grim end to a pretty good meal, in an average room drinking forgettable booze. We felt we needed a bit more, so travelled up the road to Bar 601, which happens to be next door to the excellent local Japanese restaurant Icco, a much better first choice if you’re in the area. Taiko is close to a lot of good things, but some distance from being somewhere I’d enthusiastically recommend. But they’re nice people, and I hope they eventually get there.