Khao San is tucked away in the backstreets of Newmarket. Photo / Babiche Martens In the past few years I’ve eaten at three really good Newmarket restaurants, though unfortunately they’ve all been at the same address. Davis Crescent would be a hell of a street if film festivalgoers could choose between Basque Kitchen, Tao and Khao San Eatery & Bar for their pre-show gobble, but each of these eateries replaced the other, meaning the full selection is only available to people with the ability to travel through time.

I’d love to jump in the DeLorean for one more roll in the hay with Basque Kitchen, the Spanish tapas restaurant where interacting with the service staff could sometimes make the David Lynch film you had tickets to feel dull by comparison. And why didn’t Tao stick around? The food was fantastic and the staff were just the right sort of honest: “I hate them all,” the waitress told me when I asked her to recommend a speciality Chinese liquor. The location might be part of the problem, being tucked away in the backest of backstreets. It’s the sort of place where, unless you religiously follow your smartphone directions, you’re liable to find yourself wandering along the railway tracks with your spouse in search of a useful landmark.

I was eating here with Tony Stewart, a remarkable restaurateur himself, who had agreed to meet up and tell me the story of his beautiful restaurant and why he was closing it. It was his first time being part of a review of somebody else’s joint, and he was quite enjoying the novelty. “Someone suggested I should become a reviewer myself now that my restaurant days are over,” he said towards the end of his meal. As a friend, admirer and colleague I thought carefully about my response. “Sod off, that’s my job,” I said. 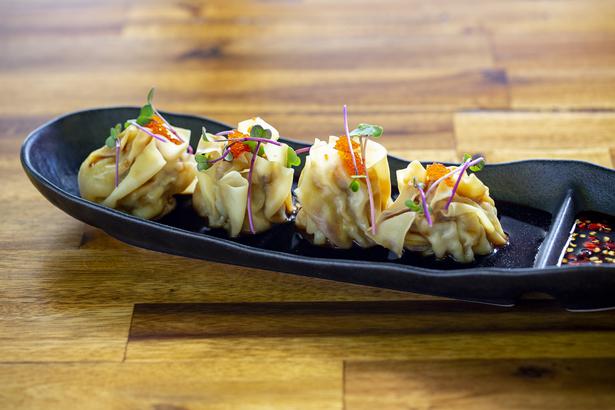 I’d come across the Khao San brand before, having found it to be the only edible option on Uber Eats in the early days (there is more choice now, including about a dozen different places doing poke bowls; I was late to the poke party but have been hitting them pretty hard lately, enjoying their deliciousness and the lack of self-loathing I feel afterwards). This new restaurant is same same but different, maintaining some links to the takeaway joint on Symonds St but standing on its own feet as a restaurant. The important thing is that both are delicious — Thai food worth crossing the train tracks for. It’s a very long menu, but unlike the long menus you get at European restaurants, the range of choices fills you with confidence rather than a suspicion that the chef is confused. Most of it is solid Thai tucker but there are also some lovely pan-Asian choices — we started with sashimi, for example, served in a bright fusion dressing with some fresh salad greens. Then we shared four Cantonese shumai dumplings, filled with pork and prawn and served with soy and a very, very spicy chilli sauce.

Tony’s restaurant, Clooney, moved to 100 per cent New Zealand ingredients last year, and as a locavore he was torn between the fresh New Zealand clams in a coconut broth and 1kg of Greenshell Mussels in a green curry sauce. We ended up getting the latter, which was good, though there is a slight design flaw when it comes to eating these bivalves in a restaurant — they don’t stay hot enough for long enough so you need to serve them in an insulated pot or put up with the fact that they’ll cool down quickly upon arrival. It’s not the end of the world but I like my seafood piping hot or icy cold. I hope somebody innovates around this problem because mussels are delicious and cheap — if you know of a place doing them really well let me know and I’ll spread the news.

I ordered a slow beef boat noodle soup, which I haven’t come across in my own Thai cooking but according to the menu is a “famous, original” part of that country’s cuisine. With the rice noodles and the woody sweetness of the broth, it reminded me of a good Vietnamese pho, though the springy beef balls (balls of mince that is, not, you know) offered a bit of variation from that classic.

Khao San has just the sort of friendly service you’d expect from the land of smiles and the worst you could say is that it misses some of the personality of its predecessors. I can’t promise you’ll see Dave Dobbyn here but it is definitely the sort of place you run into random friends. So welcome to the neighbourhood Khao San Project, I hope you stick around.