Feriza’s arrived with one of the most impressive marketing launches I’ve seen for a restaurant. Turkish delight delivered to my place of work; highly-produced web videos created just to communicate the brand; a website so shiny I could see my reflection in it.

Nine times out of 10, if I ask a new restaurant for their phone number the maitre d’ apologies gravely for the fact they don’t yet have printed business cards. Here at Feriza’s, however, there was a neat pile of them right next to the cash register. I got the strong feeling that the printing of business cards was the very first thing they did. What does this tell us about the operating priorities of the restaurant’s owners, who also preside over Bodrum in New Lynn, Nomad in Pt Chev and Deco in Titirangi?

That they are organised, experienced and have suppliers who deliver with the urgency of someone with four contracts at stake rather than one. But I also think it says something about how important great food is to them in the giant, graphically-designed scheme of things.

The food is not great here, you see. If it was, I’d be telling you to rush down immediately, because almost everything else is crackingly good. It’s on a Wynyard Quarter corner, taking over from poor old Kindred, possibly the shortest-lived waterfront restaurant in human history.

Feriza’s has redecorated, warming things up immeasurably with colour and botanical furnishings. They also have tables outside which, even in August, are warm, bright and indulgent.

We couldn’t believe our luck to be in full sun on a fine day, and our hopes were high when a smart young man came to us and talked about the menu. One thing you can say about this restaurant group is that they hire great staff. Chatty, eager-to-please millennials with enthusiasm for life have been the standout feature at each of those other eateries, so either the owners have a great HR policy or they’re paying over the odds.

Whatever, with a good drinks list and beautiful surroundings, the smiling service is almost enough to get Feriza’s over the line.

But the menu currently has an averageness that will appeal only to university graduands looking for food that won’t offend their grandparents. There is nothing you can point to and say that it was terrible, but almost all of it could be better.

A blurb says that “the kitchens of the Ottoman Empire were a hotbed of competition and fierce rivalry as the palace chefs sought to create dishes that would impress the Sultan at the time”. But there’s a fine line between impressive and depressive, and Feriza’s is skating it.

The centrepiece of the menu is gozleme, thin sheets of flat bread filled with savoury delights and then cooked over the grill. The bread is great but the insides were bland — “potato, onion and feta” featured almost no feta, like when you go to make a Greek salad and discover your flatmate has used all the cheese, so you grab the packet out of the bin and shake the remaining crumbs over everything in the hope that will do the trick.

Spinach and mushroom had mushrooms all right but they barely tasted of mushrooms, let alone anything else. You expect spinach to be bland but if all you’re doing with your fungi is turning it over in a fry pan it’s not going to magically start to taste great.

Slow-cooked lamb was cooked just right but came on a beetroot hummus too low on beetroot.

Not that there are any laws around minimum quantities of beetroot in a hummus but when you only use a little bit the colour of the dip changes from beige to a milky pink, an unattractive hue for something on a restaurant plate. It came with a choban salad featuring dull winter tomatoes, red onions and herbs. 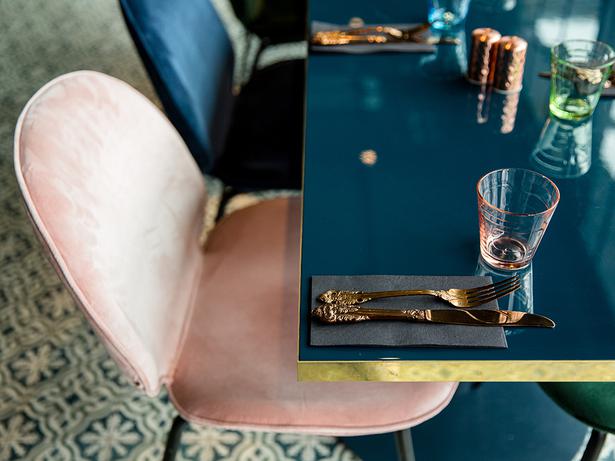 We also ordered dolma, a promising sounding stuffed vine leaf served with a whole baked capsicum filled with the same stuffing: a sort of spiced rice which could have really used some almonds, currants, or preserved lemon to give it some interest.

The dish was missing a “salsa” promised on the menu but they whipped one up while we waited — the same choban salad with a bit of extra vinegar.

The overall impression is of a chef who doesn’t trust us with true flavour. She should put the same intensity of ingredients into her mains as she does into the kunefe, a truly wonderful dessert featuring baked cheese, wispy kadaifi pastry and a lemon honey syrup.

It comes with good pistachio icecream topped with white candy floss that looked so much like Donald Trump’s hair they could have called the dish ‘‘covfefe’’. If they can create something this magnificent when it’s sweet, what’s stopping them doing the same for savoury?