The special of grilled beef tagliata ala caprese on the menu at Al Volo. Picture / Jason Oxenham

There’s a sign on New North Rd I’ve never noticed before. It says “Welcome to Uptown”, and it took me a few seconds to register that “Uptown” is a geographical designation, a shorthand for the clump of suburbs on this hill at the top of town.

Billy Joel sang about an Uptown Girl but I should point out that Uptown, Manhattan is a posh sort of area where you might run into Christie Brinkley doing yoga in the park. Uptown, Auckland is still on its way — our uptown girls are more likely to be found waiting in line to see Napalm Death at the Powerstation.

Despite life being a bit industrial, there are some surprisingly good places around here to eat and drink.

The French Cafe and Kazuya would both make my top 10 restaurants in Auckland, I love the soup at Ramen Do, Robert Oliver’s Kai Pasifika is great, and then there are Galbraiths and Uptown Freehouse if you’re looking to neck something crafty at the end of the day.

But, as I bike home each evening past all of these places, it’s Al Volo I most wish I was at. On the corner with big glass windows, it always seems to be humming with happy people munching pizza and slurping wine.

I’ve been past so many times, pedalling uphill in the cold, that one day I decided enough was enough, and that evening I sent an email to my work colleagues promising pizza the following night for anybody who wanted it.

Only one person replied. Well, people have busy lives. But as 8pm approached I began to get a little nervous — group dining only works when there’s a group of you. At this point I was staring down the barrel of a two-hour date with the new social media producer. The potato pizza on the menu at Al Volo. Picture / Jason Oxenham

Thankfully, as work finished, a small crowd formed and we made our way up to Al Volo. The waiter found us a table and I placed myself in a chair that would allow maximum gloating privileges over any cyclist who happened to be passing.

Later the waiter said to me, quietly and respectfully, that it would have been good to get some warning I’d be arriving with this many people and I said “tell me about it mate, I’d have been keen to know earlier too but you know what millennials are like.”

Then I shook my head conspiratorially as if he was in his 40s too, but he was about 23, so probably didn’t pick up what I was laying down.

He was nice enough that guy, though he needs someone else on the floor to help him out. I visited a week later with my family and both times there were customers looking around anxiously for help.

There should be one more waiter just scanning for empty glasses — they could have sold twice as much booze if people weren’t having to wander up to the bar themselves to get a refill — and given the sort of margins you get on Italian wine the extra staff member would pay for themselves within half an hour.

The good news is that the food is fantastic. The pizzas are cooked in a beautiful wood-fired oven with properly fermented bases and deeply tasty toppings.

Three men work hard assembling ingredients and sliding things in and out of the oven, and they’re justifiably proud of what they do. 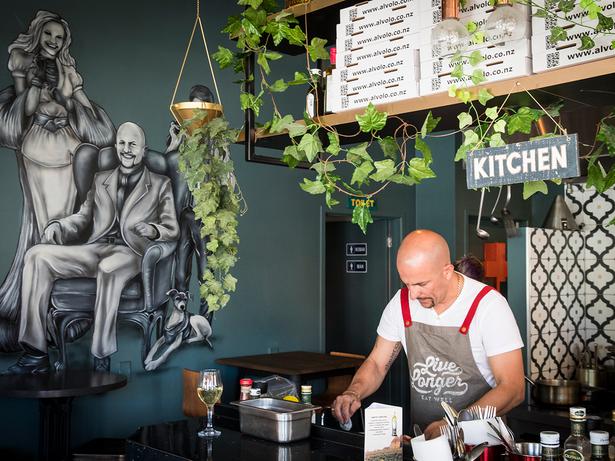 My 6-year-old daughter and I had a peek at the process from behind the counter and the head chef spotted us, came around and lifted my daughter to see the fire close up.

He had such a warm, generous vibe that this seemed like a normal thing to do — it would have probably seemed normal if he’d picked up my wife and carried her over too — and the simple act gave the restaurant a personal feel that you don’t quite pick up when you’re sitting in the far corner waiting to order a beer.

Almost all of the pizzas are good — I particularly recommend the quattro formaggi, which comes with a good tomato sauce and rocket which freshen up the intense cheese experience. Surprisingly they haven’t quite nailed the potato pizza, those slices of spud being uncooked on both occasions I visited.

They do pastas too, and I recommend you share one of these — perhaps the intensely flavoured, chianti-braised lamb ragu with acorn-size gnocchi and pecorino. And beg them to put on their special salad — a combination of fresh buffalo and fried mozzarella with young rocket and prosciutto.

Al Volo is every bit as good as it looks from the road, and almost as good eaten at home if the parade of Uber Eats drivers is anything to go by. This is as good as pizza gets in Auckland, so add it to your Uptown black book.