The prawns on the menu at Barulho. Picture / Babiche Martens

I don’t know when it happened, but overnight-ish one block on St George’s Bay Rd has been transformed into something that looks like it belongs in a major international city. I mean, Parnell’s unique style always looked like Sydney, but more like Sydney in 1924.

This new development features actual young people, buzzing about their business in modern fashions. There’s a smoothie bowl cafe, a hairdresser and a rug store.

Okay, so those last two things would have fitted happily into the old Parnell, but these ones come without signage, window displays or cash registers, so you know they’re truly of this decade.

Some years ago, maybe five, then-Metro editor Simon Wilson made us all laugh by suggesting we name Parnell Auckland’s suburb of the year.

By the time we realised he was serious the magazine was in news-stands and everyone who worked there had to hide for the next month so we wouldn’t be continually asked “what were you thinking”.

But it turns out our editor was right, as usual, and that a lot of Auckland’s new business energy was flowing into this area of old town you would previously only visit to take a swim or crash a funeral.

So for this week’s visit to one of the half dozen or so great restaurants that have sprung up round here lately, it seemed appropriate to take Simon with me and hope he wouldn’t gloat too much. 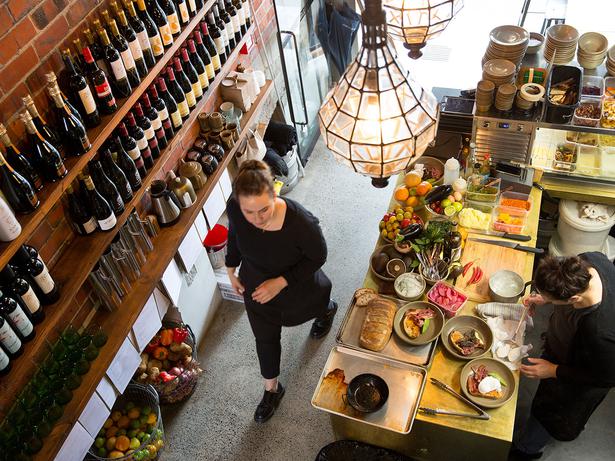 Approaching Barulho I was reminded how different a restaurant is in person. You can read all the press releases and media previews you like but you don’t actually feel what a restaurant is about until you open the front door — maybe a little earlier than that with Barulho, because from 50 metres away you can already see lights strung romantically over a chatty courtyard, and big glass windows revealing a small two-storey dining room built around an open kitchen.

I was going to say the interior was effortlessly atmospheric, though I suspect it takes quite a bit of effort to get the lighting, sound and decor just right.

It’s (fortunately, as it turns out) a beautiful place to sit by yourself with a drink for 15 minutes while you wait for the rest of your party to show up and given the quality of the pisco sours, you might consider building this extra alone-time into your schedule for the evening.

(Speaking of arrival times, I came by Uber and if you’re visiting during business hours this is really the only option. The locals take up all the street parks and there is genuinely nothing for blocks.)

Tapas cost $5 each and some of them were running low by the time we got to ordering. Fair enough, I like a little scarcity so long as it’s not, like, 7pm on a Saturday night and they’re out of steak. But saying “yoink” to the last portion of ceviche emphasises how personal the connection is between the chef and his customers. That’s all he made, so that’s all you get.

That chef changes the menu frequently — sometimes daily — so there’s not much use me writing you a list of what to order. But it’s all of a certain style — Mediterranean/ Portuguese, with a little more spice than you might expect from either of those two places. I loved the jalapeno poppers, crumbed and fried and served with a really hot romesco sauce. Chicken tenders are hard to get wrong but they came with a tongue-burning chipotle dip which tasted deep too, like chef had spent the afternoon smoking the rest of the peppers he hadn’t already crumbed for the other dish.

The prawn salad is one of the few constants on the large plate menu, such is its popularity. Prawns are an environmental nightmare — to catch 1kg of them you need to dredge and kill at least 5kg of other sea life, and in places like Thailand where they’re usually sourced there isn’t much of a voice for sustainability or permaculture.

RECIPES: Spice Up Your Life

I’m softening you up for the fact that Barulho’s salad has two prawns and costs $24, and that’s because they’re wild caught and by eating them you won’t be trashing the Southeast Asian sea floor.

They come with smoked beetroot, avocado, hazelnut, and peppery watercress that tastes like it was picked about five minutes earlier.

Afterwards we shared an alfajores, undersold by our waitress as “South American shortbread” but it turned out to be a beautiful sort of handmade mallowpuff. You should ask them to bring the selection to your table and pick the one you want the most.

The staff are great: friendly, fast and up for a joke. Given how fun it is to sit in this room and how well they’re nailing the food, I can’t see any reason not to send you here immediately. Parnell is dead, long live Parnell.

Made with the freshest ingredients, this salad board will get you on the right track for summer