Poor old Chicka can’t sell liquor. Though the beer was flowing freely when I visited at the end of 2017, upon my return in January the beer taps were glad-wrapped like a scene from Bad Boy Bubby, with signs up on the doors announcing that their alcohol licence had expired.

The staff were hopeful that things would be sorted by February, but I won’t make promises on their behalf. In the meantime, this “Chicken and Beer” restaurant can serve only chicken.

In fact the booze wasn’t a big part of equation even when it was being legally supplied. I had a couple of complaints on that first visit — one, that the beer on the list is mostly watery rubbish and, two, that the staff don’t pour enough of it. 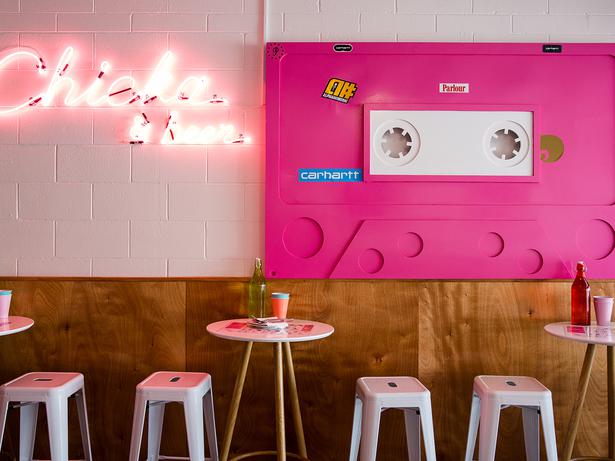 That sounds like the old joke about the two elderly women complaining in a restaurant — “This food is terrible.” “Yes, and such small portions” — but actually the only way to make mainstream beer tolerable is to drink a couple of gallons of it.

Anyway, while management clears up this minor administrative hiccup with the licensing authority, you and I can focus on the best parts of Chicka, which are the food, the attitude, and the general happy freedom of eating great fried chicken in a nice part of town next to a big stereo playing George Michael’s Careless Whisper.

Cheap Asian restaurants have always had the tastiest food, they’ve just never been very good at creating an atmosphere that makes you want to return. But the vibe is half the fun at Chicka, where pastel colours and zany waitresses lift your spirits as soon as you walk in.

There’s a giant cassette tape on one wall, indicating the genre of music you’ll be enjoying as you munch and the other wall is lined with sexy food-themed illustrations: a silhouetted woman in her underwear holds up a freshly butchered chicken — that sort of thing.

So instead of feeling old, dark and grumpy, it feels light, bright and young. The staff are of the sort of nervy/lovely disposition where they burst out into supportive laughter every time you look like you might be about to make a light-hearted remark. The lamb rib on the menu at Chicka restaurant in Kingsland. Picture / Babiche Martens

Meanwhile, in the kitchen, the chefs work harder than you’d expect them to, given that they are, after all, mostly just frying chicken. You don’t see that sort of frenetic activity at KFC, do you?

This is, however, much better than you get from the Colonel. Less greasy, although just as crunchy.

You can order your preferred combination of wings, boneless thighs or drumsticks, and although you can also choose from a variety of sauces, I advise you to opt for Chicken Zapp, a sauceless option where the flavour is packed into the coating.

There are Thai flavours throughout the menu but this is the most genius execution, with a northeast-style larb of lime, ground rice and chilli used to crumb the chook, imparting zing, crackle and heat.

I’d prefer if this was just a fried chicken joint, and I’ve got a feeling Auckland may one day get a branch of Melbourne’s terrific Belle’s Hot Chicken, where they really do just offer that one thing to eat, but Chicka is more of a full service Asian fusion eatery.

If you don’t feel like poultry you can get lamb, noodles, soup, dumplings or buns — and though plenty of these taste good, the concept is somewhat less interesting for their being there.

Skip the pork bao, which aren’t as fresh as they should be, but do have a go at the lamb ribs, which are unusually delicious. 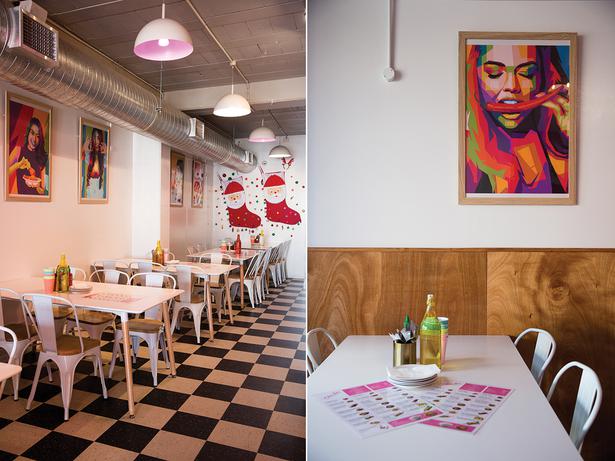 I find ribs unacceptably fatty in most restaurants but at Chicka the chef doubles down by serving them with a cheese fondue and I have to tell you, it just works, maybe a bit like when someone punches you in the arm to make you forget about your sore toe.

The cheese is liquid when it arrives, and rubbery by the last mouthful. At this point I should clarify for anyone who’s been skimming to this point: if you’re detoxing this month, Chicka may not be the health food restaurant for you.

The somtum green papaya salad is too sweet — as if the kitchen doesn’t trust your Kiwi palate with the sort of spicy/sour balance that makes this dish what it is.

It tastes okay but you can get a B+ Thai salad almost anywhere. They should choose what they want to be remembered for and jettison all the rest.

Still, this is a promising start, and the low price point makes it popular with Instagrammers, who will have as much influence on Chicka’s success as any review. I look forward to seeing a #nofilter liquor licence pop up in my feed over the next few weeks — chicken and Fanta don’t have quite the same appeal.