The chocolate pudding on the menu at Conch. Picture / Babiche Martens

I didn’t know Ponsonby Rd had any more secrets. My wife and I trudge up and down it every weekend with our tiny family, browsing the green vegetables at Ceres, dropping a week of soft plastics into the Countdown recycling bin, checking out the clothing shop windows when our girls aren’t watching.

We want the two of them to last as long as possible before giving up nature for fashion so if, say, my wife sees a pair of shoes that she likes she has to register and appraise them out of the corner of her eye like The Terminator, while staring straight ahead and pretending to be interested in a really good tree.

Not much in the food space escapes me, however, and I’d always written off Conch as a music store with coffee. For a while this was true but, the waiter told me, it has moved over the last few years “from a record store to a bar, then we were a bar/restaurant, and now we’re starting to take the food side of things more seriously”. He was loose as a goose that guy, and I regret that the rest of the gossip he shared is unsuitable for print. But the upshot is that Conch is now pitching itself as a serious contender — a Golden Dawn-style drink and food paradise, where the bearded and beardless can sit side by side in harmony, united by their love of craft beer and pork.

From the street, it looks like a dark bar space, but you wander through into a garden bar full of light and promise. You couldn’t get a tan through the opaque ceiling, but you can at least get a sense of the weather.

The booths were mostly empty when my buddy and I arrived, at 1pm on a Saturday, but the feeling that I’d stumbled on an undiscovered oasis didn’t last long. People kept pouring in, and by the time we left the place was thronging.

As 3pm isn’t a traditional meal time, perhaps they were there for the drinks, which are spectacularly good. Conch offers a solid range of Hallertau beers plus a guest tap, which must seem like a novelty option when you’re opening up a bar and want to keep things simple.

But, as a customer, what an unalloyed joy it is to say “yes, I’ll give that one a go while you’re pouring it fresh”, and what a great way to signal to locals that you take quality seriously. 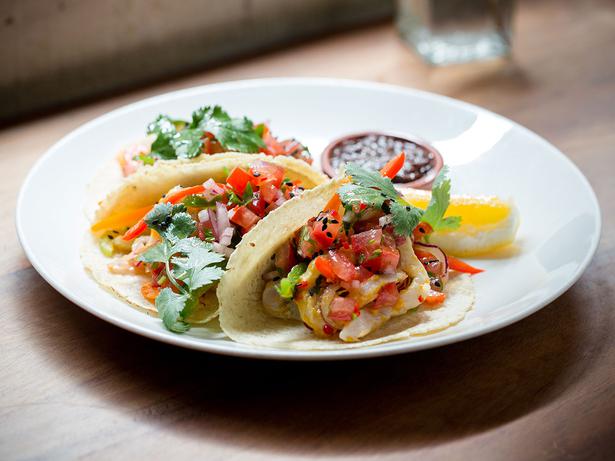 The ceviche taco on the menu at Conch. Picture / Babiche Martens

The wine list is delicious and unexpected — you wouldn’t expect an old record store on Ponsonby Rd to be the place you’d find Dog Point’s lesser-known Section 94 Marlborough Sauvignon Blanc, the one that tastes unlike almost anything else produced in that region’s 22,000ha of sauvignon vineyards.

Yet here it is, next to other wines you really find only in great restaurants, like Milton’s chenin blanc out of Gisborne. I realised that in two hours, upon my return to the family home, I would have a lot of acting sober to do.

The menu is ostensibly South American, although there are other bits and pizzas. We started with a fresh, if unexceptional, ceviche taco then moved on to some arepas, which are much better.

A sort of rustic, thick tortilla, they’re made with ground corn and olive oil and they crumble to the bite. The chicken one in particular was heaven, a juicy piece of thigh flavoured up with aioli and caramelised onions.

Interestingly that chicken is the only meat not cooked in the courtyard pizza oven, an impressive looking hearth that doesn’t impart quite as much flavour as restaurant owners think it does.

Perhaps we’ve been spoiled by the new barbecuers at Woodpecker Hill and Miss Moonshines, but pizza oven meat is not the sort of thing you cross town for, even the stuff that’s been roasting slowly over hours. 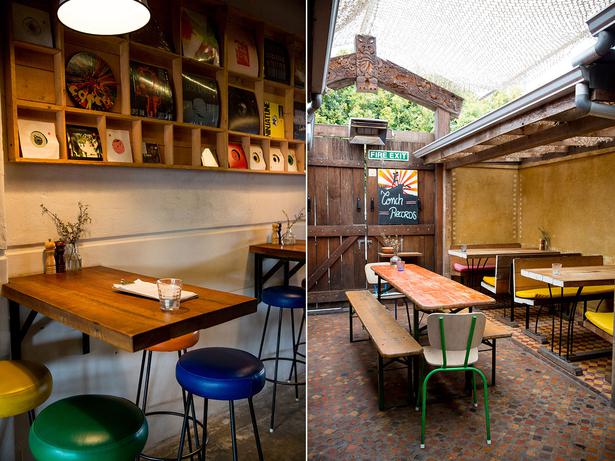 The interior and courtyard area at Conch. Pictures / Babiche Martens

Not to say it doesn’t taste great and the crunch on the pork belly crackling obviously benefits from that extra time under flame. That pork came on a pleasant salad dressed in a plum and ginger sauce, which would have worked well had it not been for the presence of red quinoa.

Auckland, it is time to put our foot down about red and black quinoa, which are horrible, tasteless, unwelcome additions to any meal. “But it contains protein!” I hear you object. Well, so does a fingernail.

The chocolate fondant is a real treat here — thick and oozing and served with blueberry jam and mascarpone. Yes, what began as a Saturday afternoon experiment turned into a multi-course, wine-matched degustation.

To soften the blow, on the way home I picked up some raddichio as a gift for my wife. She would have preferred shoes, but what sort of example would that have set?

The stage is set for Ponsonby’s new restaurant Adam Arnold