The vegetable manchurian on the menu at Everest Dine. Picture / Guys Coombes.

Try as I might to work outside of the system, more often than not these days I’ll find out about a new restaurant from a PR firm, hired by a restaurateur who recognises that his or her expertise lies in cookery, not publicity.

I’m particularly hard on PRs because I used to be one myself. Yes, dear reader, for some years it was my job to convince journalists to write about my paymasters’ products. I worked in London, where PR was a high stakes game, and you had to really work hard to get the attention of the press.

I was a hero if it came off — like the time I landed a chocolate advent calendar in the pages of Vogue. But I was a villain if it didn’t — like the time I wasted a year’s marketing budget on a £20,000 salivating robot with the prosthetic face of Keira Knightly.

There are many reasons, emotional and legal, why I can’t elaborate further on that last example, but the point is that sometimes the money you spend on PR pays off and sometimes it doesn’t. Likewise, sometimes a restaurant will spend thousands on a publicity campaign with beautiful photos and a fancy press release, when they could have just done what Everest Dine did, and send me an email in broken English asking me to come.

I didn’t visit straight away, because most of Auckland’s ethnic restaurants are run by people with big hearts and small bank accounts — there seems little point in getting me in to tell you that the staff are nice but the food is nasty, cheap and filled out with sugar and coconut cream.

But I kept coming back to this email. “Auckland’s first Nepalese restaurant” it said, and “please spread our restaurant’s existence”. I decided that there might be something special about this place, and so booked a table one Thursday night for me and my vegan babysitter, as a thank you for all her hard work. I also invited her omnivorous husband, figuring he’d leap at the chance to eat meat instead of moss.

Everest Dine is on the main strip of Parnell and, appropriately for a Nepalese restaurant, getting to the restaurant requires quite a climb. 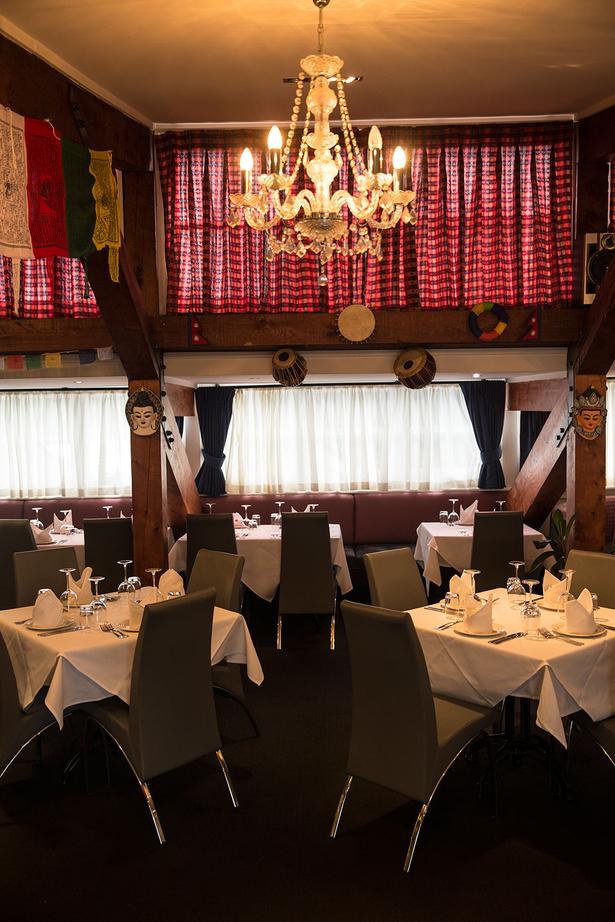 At the bottom of the staircase was a young gentleman I thought was perhaps a Sherpa, but he was handing out flyers to pedestrians, the second-worst thing a restaurant can do for its image behind scrawling sexist jokes on the bathroom chalkboard. You wonder whether it’s worth it — I suspect by evening time most Parnell locals have already decided where they are going for dinner, and that they made that decision in 1983.

First impressions inside are not fantastic — the lighting is bright and the music non-existent. It’s an unusual room, which doesn’t look to have been refurbished since Ed Hillary was a boy.

But as soon as the staff arrive at your table things improve. We were served by an incredible young Nepali woman — smart, funny and sweet. She’d burst out laughing during the ordering process — when I confirmed I wanted it “Nepalese hot”, or when I asked for a side of the local mustard greens.

It was the laugh of a girl genuinely amused and excited to have people trying food from her home (she was living in Kathmandu as recently as the earthquake) though, she confessed, her future was not in hospitality but in bio-engineering.

What’s the difference between Nepalese food and Indian? When it comes to starters, they’re as different as Mexican and Indian, she told us, though the mains have a tomato and onion gravy base so are more similar. They serve both styles here but you should go for the Nepalese. Unlike Indian they have no butter or cream added, and they leave the bone in for meat curries, though these aren’t quite as fall-apart tender as you might expect — think barbecue rather than slow cooker.

There is plenty on the menu to explore — I’d recommend the lamb shank if you arrive early enough to nab one, perhaps some noodle soup, a potato stack spiced with tongue-numbing szechuan pepper. And definitely some of those mustard greens — refreshing on a table of saucy mains, and spiked with the distant flavour of whole spices.

The clientele are mostly older people — like Everest itself, the restaurant must lose 5 to 10 per cent of them on the climb up — but hopefully we can get some younger people along with this review; there is plenty here for the hip under-80 crowd.

And that waitress turned out to be the owner’s daughter — in her final year of high school, helping dad out with his business at night and stepping in to translate when some strange man from the newspaper says he’s going to write a review. Please visit and support this superb family business, and do it soon before we lose another great hospo worker to bio-engineering.