If you want a great food book buy Tiny Moons by Nina Powles, a New Zealander of Malaysian-Chinese heritage, living in London.

She writes movingly and beautifully about the links between food and identity and belonging, and at one point discusses the joy of eating dumplings alone in Shanghai, where thousands of others are eating alone too. "For a short while," she says, "I am one of them".

I had this passage in mind as I sat down at a table-for-one at Fish Kitchen, but of course nobody else in this restaurant was eating alone: "for a short while, I was a loser". I'd scrambled from my TV show to the ferry building, then sloshed across the harbour in a commuter boat, arriving at the restaurant at 8.42pm. A waitress had told me that the kitchen was now closed but I'd convinced her to ask the chef if he could turn the hotplate back on. One key to eating alone comfortably is to maintain a certain anonymity, but it's harder to slip under the radar when you've just forced every staff member in the building to put their aprons back on and cancel their evening plans.

The restaurant is right next to the ferry, and the menu is so good it must be very hard for Devo locals to traverse the wharf without stopping in.

I started with a glass of sparkling Nautilus, because I'm worth it, then ate my seafood with an albarino, a very exciting white grape varietal you might call a cross between chardonnay and sauvignon blanc (if you were being coarse), and which is now apparently being made by Smith and Sheth, probably the most premium New Zealand winemakers I've ever come across (they have an incredible "cellar door" experience in Havelock North but no spoilers, book yourself in there next time you're down).

And the food! As at sister restaurant Vic Rd Kitchen, these dishes sound good and taste even better than you hope. Bluff oysters were handled with mastery — offered cold and raw as they should be but also in a tempura batter, with pickled mushrooms and a seaweed mayo so good that you eat it on its own when everything else is gone. I haven't stopped thinking about this dish. 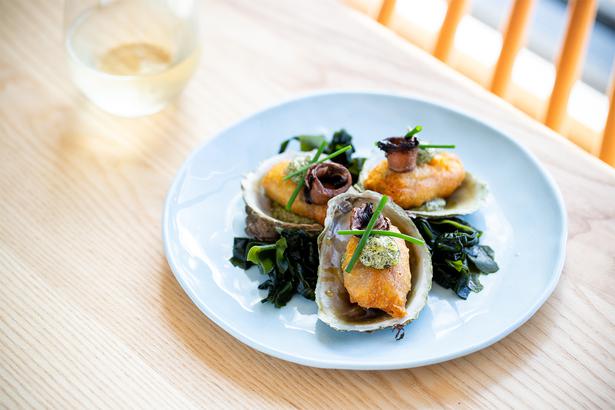 The onion bhaji is satisfying in the most elemental way, these big bird nests of fried batter served on a high-quality coconut yoghurt with tamarind. And they do octopus too: bite-sized pickled tentacles piled on a plate with chilled pieces of potato, chorizo and a sort of red capsicum coulis.

Best of all were the snapper wings — the surprisingly fleshy part of the fish that is tossed aside in a traditional filleting session.

They can feel a bit worthy in the wrong hands but here they were as indulgent as a KFC family pack, deep fried in a spicy crumb and stacked up into a little mountain, scattered with lemon wedges and gherkin slices.

I loved it so much, each wing holding together just long enough to dip into remoulade (a punched up tartare) and bring to your lips before it breaks apart in your mouth into this alternately salty, crunchy, fatty, juicy mouthful of fresh fish. You must visit for this dish alone. 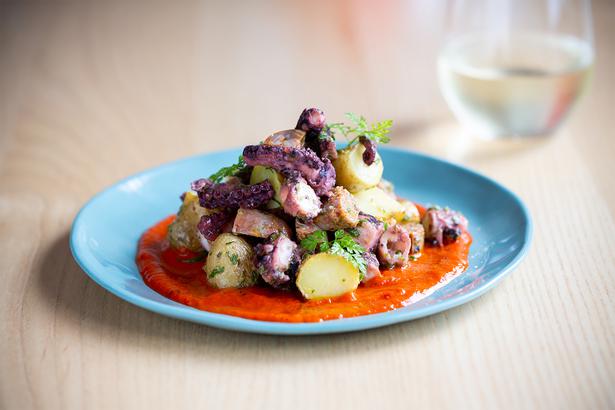 I ordered the steak too, but I didn't like it much. It was a big piece of bavette, a cut which is famously hard to get right — you pay for the extra flavour in toughness and, having experimented a little with it at home, I don’t think I'd bother unless I was prepared to cut it very fine across the grain.

So often you hear people complaining meat is "too chewy"; but what does that really mean and who are they to tell you that the chewing isn't worth it? Well, because I had nobody to talk to and nothing much else to do, I took a small piece of this steak and counted how many times I had to chew it in order to turn it from a chunk into something my stomach could work with.

The answer (replicated in multiple experiments) was 85. So if that seems reasonable to you then order the steak, knowing also that it comes with a fried egg and dill on top, neither of which (for me) added anything to the experience. But don't let me talk you out of it.

The room feels more like a pub than a restaurant, the ambience falling somewhere between a city bistro and the interior of the ferry you came in on. But what a stunner of a new eatery for Devonport.

As the ferry scudded home across the harbour I drank a beer beneath the stars, pleased to live in a city where even losers get to live like kings.