The beefroot burger on the menu at the Food Truck Garage. Picture / Guy Coombes. The two most important restaurateurs in Auckland right now are Al Brown and Megan May. Al Brown you will know of course — every casual eatery that opens in this city for the next 10 years will be judged against his flawless restaurant, Depot.

Megan May owns the flagship Unbakery in Ponsonby, as well as sister outlets in Kingsland and Britomart. The waitlist at these places can be almost as long as at Depot. Her food is most famous for being raw, but that’s only one of the ways in which it stands out. She uses no meat or wheat, no dairy or egg, no refined sugars, salts or carbohydrates.

Her menu’s packed with heavy lifters — foods that provide a high ratio of nutrition to calories. And yet it tastes incredible. You would eat it if there were no health benefits, just for the flavours, textures and colours. Her tacos taste as delicious as the ones at Mexico — they just happen to be extremely good for you. 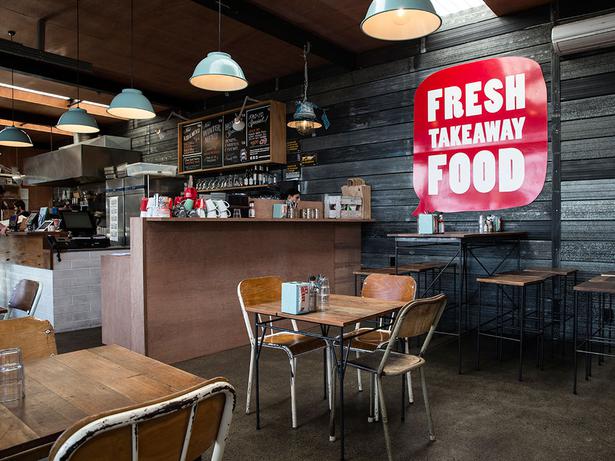 I ate at the “faster, tastier, healthier” Food Truck Garage this week, for the first time since TV chef Michael Van de Elzen moved on. It did not go well. I arrived hungry and left depressed. I went twice to be sure — ordering nine things and finishing only three of them.

I had high hopes for the place. It’s owned and run by some old TV buddies — good people, whose warm, friendly conversation I’m going to miss. The maitre d’ and chef both have strong CVs. I knew they’d all be off work and I could judge the menu on its merits.

Let’s take the black bean dip — a starter that sounds simple but could be really delicious. If you were making it at home what would you throw in with the beans? I’d go for lime juice, red onion, chilli, and coriander for starters — maybe some cumin seed when I’m frying things up. I’d blitz the beans but I’d take a few out to stir through later in order to add some texture and interest. At Food Truck Garage, as far as I can tell, they’ve taken half a can of black beans, pureed them into baby food, then put it in a bowl.

How about making an “energy salad”? You’d need some fresh raw vegetables then nuts and seeds — activated if you can be bothered — some microgreens or herbs, then a kick-ass dressing. At Food Truck Garage they put a heap of fridge-dried grated carrot next to a heap of grated beetroot and dump half a cup of raisins over the lot. There are also four pieces of kale — raw but not dressed or massaged, so they may as well be gorse.

The burrito bowl on the menu at the Food Truck Garage. Picture / Guy Coombes.

I could go through the whole menu like this, but then there are dishes which can’t be helped. Kim chi is one of the most exciting things in food right now, but it’s a fermented food — you need a week for the healthy lactobacillus to take over and start doing its thing. Here they seem to have finely chopped some cabbage then (barely) tossed it in spices.

Their famous burger was the worst I’ve eaten in Auckland — a dry, overcooked pattie with boring buns and minimal sauce. They claim to have sold 30,000 of them, but I’d be surprised if anyone’s bought more than one.

I should add that the nutmeat and prawn tacos are both pretty good, though they’re served in cold soft tortillas, straight out of the supermarket packet. The restaurant was full, too, with a crowd I’d describe as “easily-led fashion types and students who don’t know where else to take mum and dad”.

Towards the end my wife observed, constructively, that “there are worse things in the world to eat than two cups of raw carrot”. Luckily for all of us, there are now so many better things, too.

The Best Fried Chicken in Auckland

A restaurant in Wellington is serving up a pricey burger meal