So I know you’re meant to take public transport to Commercial Bay but it feels a bit pointless waiting at a bus stop when you’re a family of six and have your own bus-like vehicle in the garage at home. This was meant to be a fun all-ages trip into the city but we were running late, and I’d misread the parking instructions on the website, and because everything is new there’s no signage yet, so that’s how we ended up getting lost in a dark city alleyway in the rain on a cold Saturday night.

“No you’re not, you’re having fun,” I corrected her.

“Nobody’s scared! This is a treat.”

We got lost again inside the Commercial Bay building but at least there was lighting, heating and a live brass band. We followed our noses to the foodcourt but couldn’t see any sign of Gochu, so I Googled the mobile number for a mall concierge who answered after one ring then patiently guided me from my current spot to the front door of the restaurant. On the way I waved to half a dozen people I knew which, I think, might be the reason for Commercial Bay’s early success. The construction isn’t quite finished, and you will sometimes find yourself wandering through a service corridor searching urgently for an exit, but this is a proper town square — a central place Aucklanders can go at the weekend and feel like we’re all in this city together. No wonder everybody seems so jolly. It’s the literal opposite to lockdown.

And the food looks very good. Known favourites like Hawker & Roll, Juke Joint and Burger Burger, along with promising newcomers like Poni Room, The Lodge and this one, Gochu — a modern Korean eatery run by a couple of hospo old hands, and a kitchen team who are doing really special food in an unlikely environment.

We were seated in front of a big window which framed the ferry building (my 9-year-old is still sore after the last time I took her to the ferry building; she’d been expecting a different sort of fairy). You would normally need to go somewhere with white tablecloths to get a view like this, but here we were in an environment only slightly flasher than a foodcourt, ordering chicken sliders.

The staff were really wonderful — patient and attentive, though the bosses should perhaps do them a favour and put all the cutlery in a jar on the table. There was a lot of place setting for what was a pretty small meal — the sort of service you’d expect from an upmarket bistro rather than a shopping centre eatery where a steady stream of people are wandering between your tables on the way to the restaurant next door. 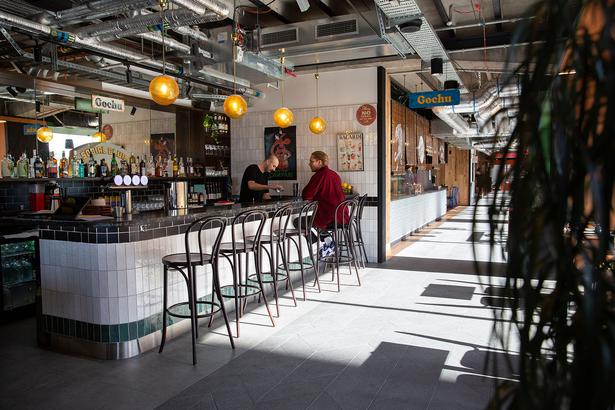 Raw kingfish is everywhere in Auckland but it’s particularly special here — it comes submerged in a clear liquid which isn’t salty or citric enough to cook it, but makes the dish feel like a cold summer soup.

I don’t know how many people will order the soondae — a Korean street food classic that is, well, there’s no other way to say this, deep fried, congealed venison blood. I enjoyed it though it was pretty funky tasting even to me — good on the chefs for offering it at all.

But there is plenty that is lighter and more approachable than this: a cold, fresh cucumber salad with spicy fermented sauce and cooling cashew cream; a bowl of cold thin noodles which wasn’t quite seasoned enough to hit the spot, but will find its own niche in a sprawling feast.

Then there was the lamb ribs, an unapologetic mouthful of fatty meat with a couple of brilliant condiments: mushroom “ketchup” and kim chi made with witloof leaves which retain their shape in the ferment and are balanced; cold, bitter and sour, on top of the hot meat.

This menu is big; I’m planning to go back soon by myself to try some more of it. And if it all sounds a bit challenging, don’t worry, they do a signature fried chicken too. When you’ve worked hard just to leave the house, get into town and find a table, I’m not going to judge you for ordering something easy to enjoy with a cold glass of beer.