The king prawn with vegan mayo and prawn powder on the menu at Han. Picture / Fiona Goodall This is a tiny, beautiful room. There’s so little space to spare, the only place for a bottle of Mr Muscle is on the bar near the bottles of liquor. The restaurant manager would like to offer more beers but he has no place to put them. So he serves Hite, a Korean beer which tastes of nothing but adds authenticity, and a couple of faux craft beers, which should be swapped out for something more interesting.

You’re better to go straight to the winelist, which is small too, but exceptional, the manager having leaned on the expertise of his neighbours at Caro’s.

The bubbles by the glass is fantastic and unexpected — I’ve never seen a waiter open a bottle of fizz to offer a taste before and the owner must have felt a little anxious seeing the cork put back into a full bottle of Methode the night before the restaurant closed for three days but anyway, we ended up buying a couple of glasses and were very glad we did.

There were a few signs that the place had only been open a few weeks, but not many. The bathroom uses sensor lights so you need to walk in quite deep before they turn on.

“We’re going to fix that,” I heard the waiter say to my wife back in the dining room, my aural senses heightened by the darkness. I was about to sniff my way to the Toilet Duck when the electricity sparkled into action and everything was suddenly as it should be. 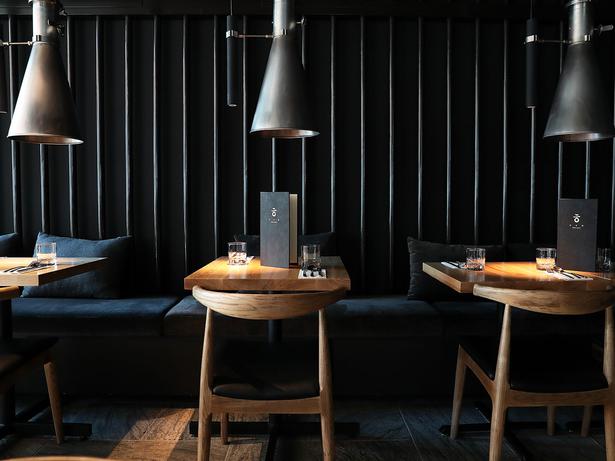 The decor is a style I call “pipey”. Vertical tubes divide the bar from the dining area and then, above each table, is a downwards-pointing gramophone horn attached by another long pipe to an external extractor fan.

You’d think it would get in the way, but after a few minutes you don’t notice it — and as a bonus your clothes don’t smell of pork belly for the next couple of months, so I’m all for it.

The chef is ex-food truck and ex-Merediths, the best possible CV combination. His cuisine is pitched as Modern Korean but it’s not the sort of modern that gives you a headache hearing it described.

The modern part comes in the way finer ingredients are substituted for traditional ones, the care and beauty with which things are plated and, okay, there was a some prawn powder sprinkled on a macaron.

The menu promised “leak powder” too, that misspelling creating unwanted mental images for a man who’d just been stumbling around in the dark trying to find a urinal, but like I said it was early days.

The rest of the menu verbiage was typo-free and appealing, with the occasional mystery. Why do they promise that a grilled prawn comes with “vegan mayo”?

Is it for people who put hen eggs above crustacea on the ethical eating ladder? More likely it’s a little show-off from the chef — I can make this beautiful silky mayonnaise without eggs, so imagine what other trickery I’m capable of.

But the food speaks for itself. Everything we ate at Han was so very, very good that I couldn’t wait to tell you about it.

A little canapes section offers some of that fast-cooked food truck flavour — the Korean chicken is an essential order, a perfectly deep-fried morsel with sweet barbecue sauce and translucent sheets of pickled daikon radish offering a tiny acidic crunch. 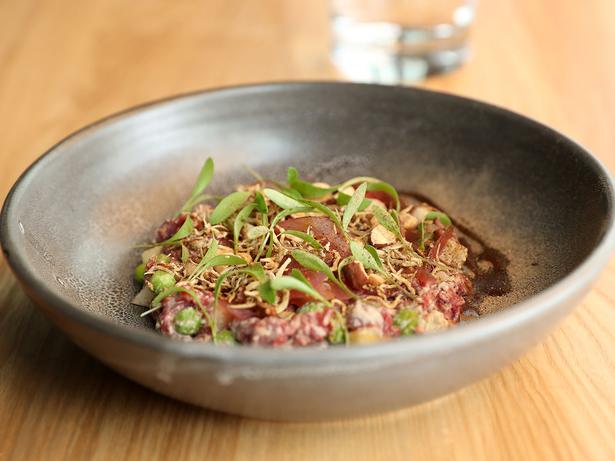 The venison yughoe with cashew, seaweed and crispy anchovy on the menu at Han. Picture / Fiona Goodall

The king prawn is shelled, stretched, skewered and grilled and that mayo is just what it needs.

At a different restaurant you might order half a dozen each of those and go home, but here you still have entrees and mains to look forward to. I recommend the “military stew”, a soup traditionally spiked with rations from US army bases when they were abandoned post-Korean War.

At Han they swap out the spam for chorizo, the sausage for oxtail. With the addition of kimchi and sago it becomes a uniquely local creation and despite it not looking like something you’d see at a fine dining restaurant, I’m so pleased the chef has introduced us to it.

I missed the opportunity to test those extractor fans by ordering the DIY charcoal barbecue, instead going for the beef galbi, an exquisitely delicious boneless short rib, sous vide cooked for 10-12 hours then finished under extreme heat.

It’s dark, sticky brown and unbelievably tender, served with beetroot dehydrated to a certain meatiness itself. So that barbecue dish has the fireworks but don’t hesitate to order the galbi instead if you’re not in the mood to do things yourself.

I’ve eaten at some great places these last few weeks but Han is the one I keep coming back to. It’s open on Sunday too, so if you fancy stretching out your weekend, this is a perfect place to do it.