There are two big, new ramen restaurants in Newmarket and each of them is a branch of a different multinational chain. I went to the first one and it was just okay and I thought “well, I guess local is better”, then I went to the other one and it was “Holy Smoke!” good, setting a new high score for pretty much every different measure you can think up.

So this is my review of the latter with the instruction that if you should find yourself in Kingdon St in search of a bowl of noodles, then Ajisen will do you fine (the staff are particularly nice), but you really should walk the extra few hundred metres to Ippudo inside the new Westfield, where everything from the drinks to the boiled egg floating on top of your soup tastes immediately and obviously better than their competitor. Your other instruction is not to pussy-foot around, because both kitchens close miserably early. After my superior meal I ran into a hungry colleague on Broadway and told her she had to go up and taste the Ippudo ramen this instant. But by the time she got there it was 8.45pm and they were turning people away. It’s possible the extra 30 seconds I spent telling her what to order was the moment that cost her a meal, surely the worst outcome in restaurant recommendation history.

Meanwhile I began my bike ride home and immediately made a disastrous navigational decision, mistakenly pedalling into an active construction site where, instead of turning around like I should have, I doubled-down on my initial, moronic judgment and kept going, until I reached a security fence and stopped, alone in the dark, surrounded by drain digging equipment and nail guns. Like I said, Ippudo has a pretty good drinks menu. You can usefully break a ramen soup down into three constituent parts: the broth, the noodles and the toppings. Ippudo’s pork broth is complex, savoury and moreish, and they do a little squirt of chilli in one corner so you can mix it up yourself and get a kick with your slurp. You’re asked to select the firmness of your noodle (maybe Kiwi ramen shops do this too but I don’t think I’ve ever seen it) with a default suggestion of moderate-firm.

READ: Paris Butter Is A Must-Visit If You Take Food Seriously

The noodles are paler, somehow more delicate than the Two-Minutesque style down the road, but both places make a big show of having a guy behind glass making them by hand (well, he was actually vacuuming the equipment with a dustbuster when we visited Kingdon St, but we got the vibe).

Ippudo’s roast pork is a little bit thicker, a little more rustic, piping hot from the soup and seasoned to create the maximum amount of flavour a sliver of meat has any right to offer. And their egg (optional) is good-salty from surface to centre, not quite set (and surprisingly cold) in the middle but delicious enough that I would order it again even if it came on its own. 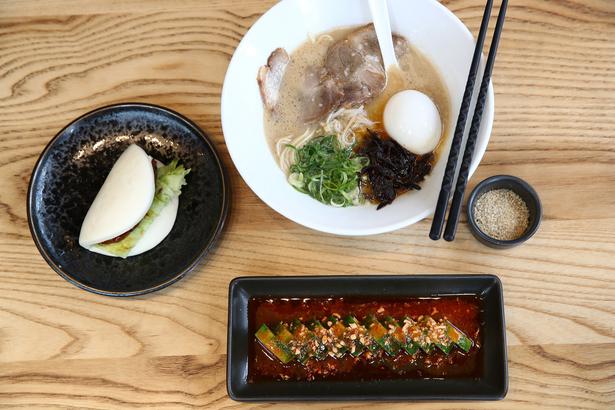 And then there are the side dishes — a flat, deep-fried selection at the other place but a source of real pride at Ippudo, where the soft pork bun is filled with dark, gelatinous, tender meat, a good squirt of mayo and a leaf of crunchy iceberg. The fried octopus bites are a lovely exotic touch and the cucumber salad is assembled with care, crunch and spice.

The staff are really superb, hovering like bees near the kitchen then darting in to grab a dish for their respective customers as soon as it is made. At one point I looked up from my food and unconsciously stretched my neck to the left to take a bit of a break from the gobbling. Some metres away a waitress stopped mid stride, looked over at me and mouthed “do you need something?” and she was so cool, in that moment I was sort of sorry I didn’t.

I mentioned this a few weeks ago at Inca but man, they’ve done a good job of this development. I suppose every other international city has been doing great restaurants in shopping malls since way back when but here it feels new, modern, even futuristic to finish your food and, afterwards, not have to take a plastic tray and put it on top of a rubbish bin to complete the meal. 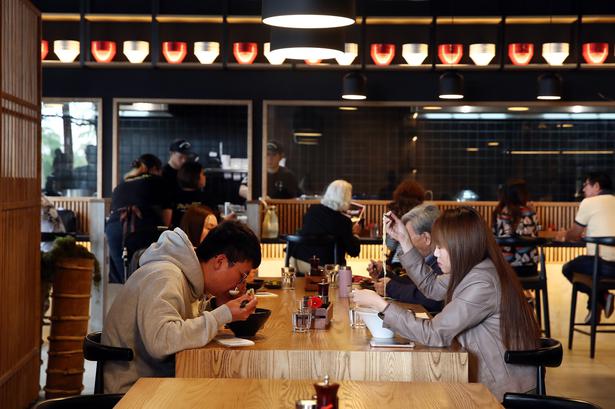 Diners can choose the firmness of their noodles. Photo / Fiona Goodall, Getty Images

In the elevator down from Ippudo a waitress from a different restaurant was on the phone, almost in tears, telling somebody how tough her night had been. “Every single customer complained,” she said, though I didn’t catch enough of the conversation to find out what about.

Why mention this? Because it’s the second time in two visits to Westfield that I’ve seen the human impact of diners being hard on service staff.

Be kind to your waiters and waitresses people! They are doing their best in an unexpectedly busy environment and, unlike us, they don’t always get to choose when they go home.