There are multiple problems with Izzy, a new Asian fusion restaurant at the Three Lamps end of Jervois Rd, yet I’m still inclined to recommend the place. Most of the issues were either fixable or one-off incidents — it’s unlikely, for example, that you will have an entire bottle of craft beer slide off your waiter’s tray and empty itself over your plate of avocado hummus. That’s the sort of thing they only let happen once, but I mention it because I can’t guarantee that in these early days, something equally comical won’t happen to you. The staff are young and learning, but they are eager and kind, and a lack of eager kindness is much harder to fix.

There are solid bones to this restaurant, the 23-year-old owner having worked in a number of successful establishments before opening his own place. His chef, Mayra Vergne, is ex-Madam Woo and partner of the head chef at Azabu (which, well, being in a relationship with somebody doesn’t mean you pick up their talents by osmosis but I can tell you that if my wife was a renowned chef she’d have plenty of input on my debut menu). 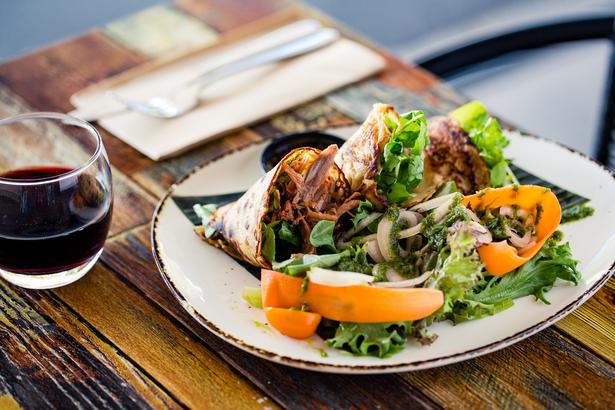 This is technically a Vietnamese-Japanese fusion restaurant though there is input from Malaysia, Mexico and even the Middle East. Few chefs could draw these ingredients and techniques together into something cohesive but Vergne does it with confidence. Take that avocado hummus — have you ever heard of such a thing?

It sounds like the sort of ambitious but terrible idea you’d find at gastro pub in Geraldine but it not only works, it’s a mere starting point. The chef piles it on the plate then pours over a sort of nuoc cham — a spicy lime dressing that cuts through the whipped hummus and activates every tastebud in your mouth. This isn’t even the feature of the dish, which is a miso-glazed half eggplant, baked in the oven until it yields. If I tell you the dish is scattered with pomegranate seeds I might start to lose you but really, this thing is a hit (pity about the fish sauce in that nuoc cham or this could have been one of Auckland’s great vegan dishes). Back to the floor staff, who are trying their best but are not quite up to it yet. Drinks service is the biggest problem — perhaps this is a cultural thing (Nam Tran the owner is only four years out of Vietnam), but it is my strong view that no New Zealander should wait more than two minutes after arriving before being offered a drink, nor should they be permitted to swallow their final mouthful of wine without seeing a replacement being ferried towards them. As I’ve often said, this is in the business’s own interests, so why are thirsty Aucklanders still having to deal with empty glasses in an empty restaurant?

READ: Neighbourhood Watch: Where To Eat, Shop & Stop In Ponsonby

Like I say, it’s fixable. Ben, who was eating with me, wants to fix the front of the restaurant too, which opens up fully so the place only has three walls. We were there on a warm night so comfort wasn’t an issue but I think his point was more related to the atmosphere. You can’t get much of a vibe going in any restaurant when there are only four customers, but at least by closing things up a little, you can control the environment a bit and make people feel like they’re in a little oasis rather than having to listen to the crunch of car bumper hitting tarseal as new arrivals try to parallel park on the city’s most horizontally slopey street. 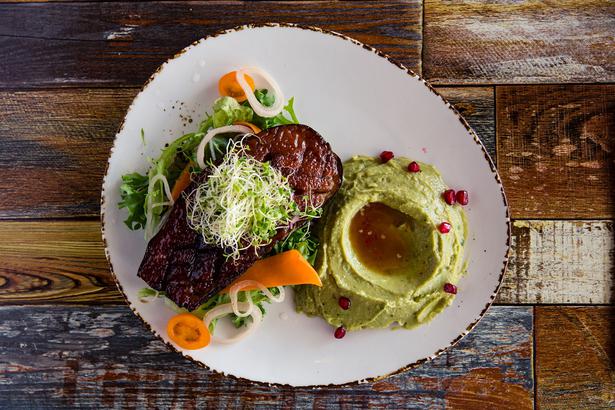 Meanwhile, we were eating happily. The ‘taquitos’ are a tasty innovation: little u-shaped fried tacos with a variety of fillings — crab and Vietnamese mint in one, beef tataki and what tasted like a good Thousand Island dressing in another. Then there was a duck crepe (we may need to add Beijing to the list of influences here), perfectly soft and folded over rich, slowly cooked meat with more of that nuoc cham as a dipping sauce. Like some of the other dishes it came with a salad on the side, dressed in something more like a French vinaigrette but so fresh, crunchy and cold that it was as moreish as the cooked stuff.

Izzy has a long way to go but at least that road is clear in front of them.

There is a lot of potential here — potential that restaurants with lesser chefs can only dream of. So do drop in for a bite, approach the evening with patience and later you’ll be able to say you were an early supporter of a Herne Bay success story.

13 Food Trends To Eat & Drink Your Way Through

Even more vegetables. Improved gut bacteria. Fancy juice instead of wine. The predictions are in about what we’ll eat and drink...