What a fantastic restaurant. It's been yonks since I left a place truly excited but this one really did it for me. I ate there on Friday night then couldn't resist returning on Sunday. Eating at the table next to me was Kazuya Yamauchi, one of the top fine dining chefs in New Zealand. Japanese Lantern Street Bar had been open barely two weeks but word was travelling fast.

It's difficult to tell you why the restaurant works, why you are inclined to forgive the occasional food error, because you're so wrapped up in the spirit of the thing. I've been to fancy restaurants where there was nothing specifically wrong but to which I knew I would never return. But JLB was the opposite, a simple eatery with no music, uncertain service and a kitchen that was struggling to keep up, but which you couldn't help fall a little bit in love with. 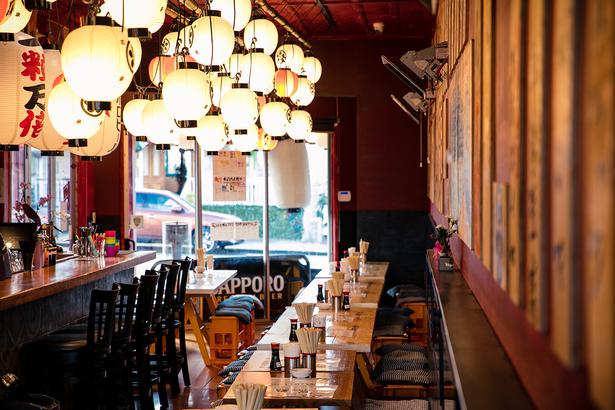 The bar has a great … well, I don’t think I've used the word "aesthetic" before but I'm struggling to find a less posh one that will do the trick. I'm not sure how else to capture the unique feel of this restaurant — the staff uniforms match the menus which match the business cards which match the signage. Even the sake bottles on the shelf above the bar look beautiful.

From the ceiling hang a few dozen lanterns and they create a lot of light but it's a unique sort of glow which is both bright and diffuse. The phone photos I took look like they were taken outside, in the daytime. It has a different feel to any Auckland dining room I can think of — the lack of ambience creates its own atmosphere.

They were rammed with customers on Friday night, severely testing their kitchen policy of one-guy-doing-everything. That's the owner back there ducking nimbly from grill to deep fryer to open straw fire. He has a couple of other staff helping to get the food out by clearing space and passing him ingredients but he's clearly an auteur, simultaneously cooking for 50 people who've each chosen from a list of 50 dishes. The beef sirloin and teriyaki chicken cooking on the grill. Photo / Babiche Martens

That might be less impressive if the menu was made up of quick cook-and-serve style plates but he's made it hard for himself — even the grilled beef is patiently cooked in the sous vide until it reaches optimal tenderness, before being held to the flame. It was sliced and sublimely smoky when it arrived in front of us — the sort of flavour you can only get from cooking over a real fire, in this case a special straw which imparts its own aroma. There's a little dish of teriyaki sauce to dip it in but you barely need anything but the meat.

That steak was borderline overcooked though nobody minded much. But the chicken livers, cooked over charcoal, were blasted way beyond edibility and weren't going to change the minds of either of my companions, who had screwed their nose up when I first made the order.

The other dish I wasn’t much into was the karaage chicken, usually a no-brainer, battered, comfort munch, but here it was a crumbed breast, chopped in pieces before serving — more like a supermarket chicken kiev than an indulgent Japanese bar snack. 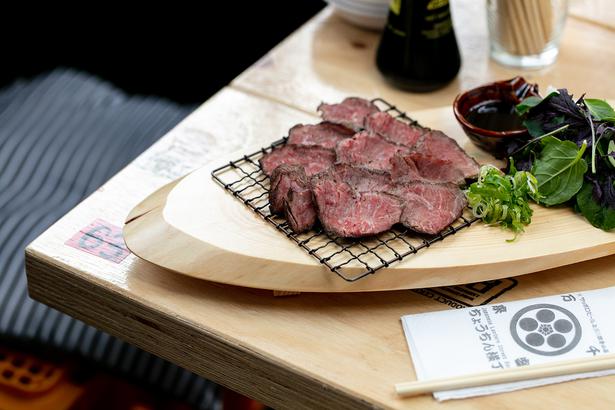 But there is plenty on the menu to make you happy, including the loveliest noodle dish: ramen-style "tan tan" noodles with just enough broth to act as a sauce — a sort of sesame-soy emulsion that, with the addition of chilli oil, was addictively good. On top was a little chopped fatty beef — brisket maybe — that turned this into the dish of my dreams.

The salmon sushi is fresh and great too — the rice warm and loose but sticking firmly around a pink piece of cold fish. Chicken teriyaki is unbelievably moist, some underskin fat left on to keep it that way and the flesh cooked just enough, with a hint of pinkness we optimistically attributed to the smoking.

The floor staff are numerous, young and sweet. What they miss in expertise they make up for in attitude and though the stress and occasional confusion was all over their faces in these early days, they were very happy to help when asked and I think they'll get better quickly. There's one guy who is really good, and when he's embraced his role as team captain and got a good system worked out this will be a class operation. 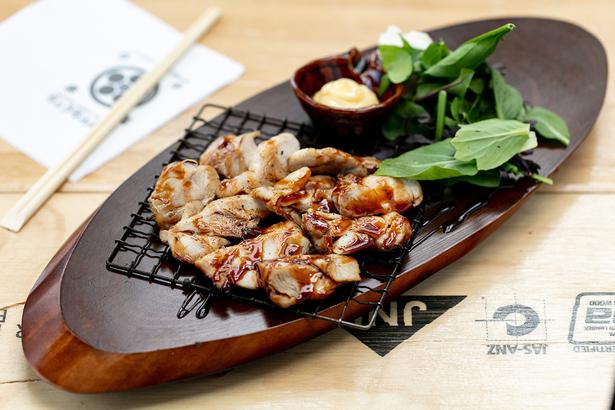 To be fair, they probably never expected to be this busy. As we hit 9 and then 10pm the customers kept coming, each table empty for just a minute or two before being filled by a new group of passers-by. It would be hard to walk past this place on a Friday night without dropping in for a tall glass of beer and a bowl of noodles. With that in mind, perhaps plan your visit on a week day in these early days, though I predict even a cold Tuesday night will be busy soon.

Japanese Lantern Street Bar is going to be a smash hit.