A selection of sashimi on the menu at Masu. Picture / Babiche Martens

Sunday brunch at Masu is one of the greatest things you can do for yourself in Auckland, right up there with a boat trip to Waiheke, a helicopter ride over the city and seeing Simon Dallow buying kiwifruit at Mt Eden Countdown.

At $68 per person the price seems great value to me, but I suppose it depends on how you look at it. Sure it’s a little steep for brunch but, if you time things right, you can definitely think of it as lunch, and possibly even dinner.

More on that in a second, but for a yardstick look at Eight restaurant at the Langham, where a buffet meal in the same timeslot will cost you $75, and where they really are much harder on the opening and closing times.

I took my now-wife there for Valentine’s Day one year and we arrived 45 minutes before the buffet officially closed but there were already signs the staff were starting to sweep up. (Sidenote: I hope you never have to hear yourself say “Quickly! Eat! Get your money’s worth!” to your girlfriend during what is meant to be a romantic meal. Nobody there that day would ever have predicted I’d still be eating with her seven years later.)

By contrast at Masu they seemed most relaxed about the finishing time of 3pm. 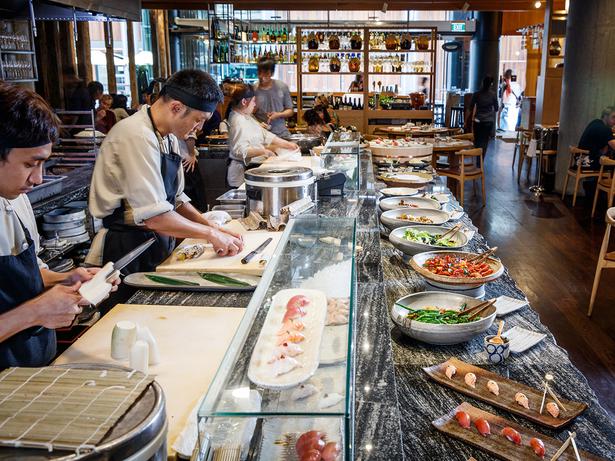 I saw former test wicketkeeper Adam Parore wander up for his first piece of sushi at 3.19 and no one on staff seemed at all worried. It must have been well after 4 by the time he called it stumps — try that at the Langham and you’ll be pummelled by two burly doormen.

Brunch at Masu comes in two parts: the first, “help yourself to everything part” and the second “this is the hot dish you ordered earlier when you were hungry” part.

Even the best restaurants struggle to make a profit and I wouldn’t ever advise you trying to game the system but look, should you happen to eat too much from the buffet and really can’t face your steak/chicken/salmon main they will bag it up for you and let you take it home. So, just saying, we got lunch and most of dinner for $68 a head.

My wife and I had come by ourselves but this Sunday session is beautifully set up for families. God bless chefs with children.

So many restaurants operate as if little people don’t exist, with their “come any time apart from 7.30” policy and their long, meandering degustations that cost $20/hour extra if you’re paying somebody to babysit your kids. 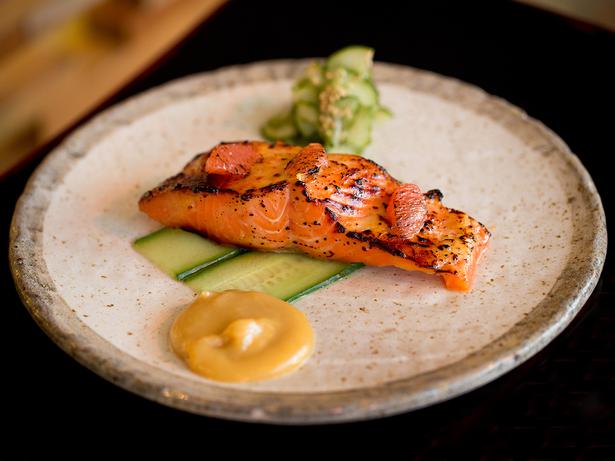 And then there are the menus, which have at worst nothing and at best a selection of deep-fried factory meats to offer younger guests.

Restaurants generally act as if children don’t exist and, although that whimsy is sometimes appealing, there’s a fine line between getting away from it all and feeling like you’re in an episode of The Handmaid’s Tale.

Masu — at least at brunch — is very child-friendly. You can set them up in the private dining room and watch them through the glass, playing with toys or reading books or watching animated movies on the flat screen.

Brunch for them is $26 a head, which is less than you’ll pay a babysitter though the long term costs of your 4-year-old developing a taste for Mt Cook alpine salmon can’t be underestimated. Ours are already into those dried seaweed sheets: God forbid they should discover Masu’s black cod.

The food is stunning to look at and incredible to eat. The raw salmon is bright orange and almost dissolves in your mouth, while the offcut wings are dredged in a tempura and deep-fried, though the only trace of oil is the omega-3 deep inside the flesh. You’ll be reluctant, probably, to fill up on rice but you should try the tiny tempura sushi too, the batter barely there but giving a little extra crunch to the nori.

I also recommend the clear brown chicken soup in a bowl barely big enough for the handmade meatball that comes with it.

And the fresh silken tofu is something I haven’t seen anywhere else — sprinkled with your choice of condiments, it’s almost enough to recommend the place to vegetarians, who’d have a good choice of sushi and moreish miso-tofu barbecue skewers to munch on as well.

For mains, that black cod is legendary but they charge a supplement for it — go for the miso salmon instead, which is prepared in a similar way and almost as good.

The staff will guide you in that warm, formal but colloquial way that is starting to become the signature of Sky City’s restaurants. Hopefully they’ll talk you into a glass of bubbles too — Quartz Reef and sashimi is as good as life gets.